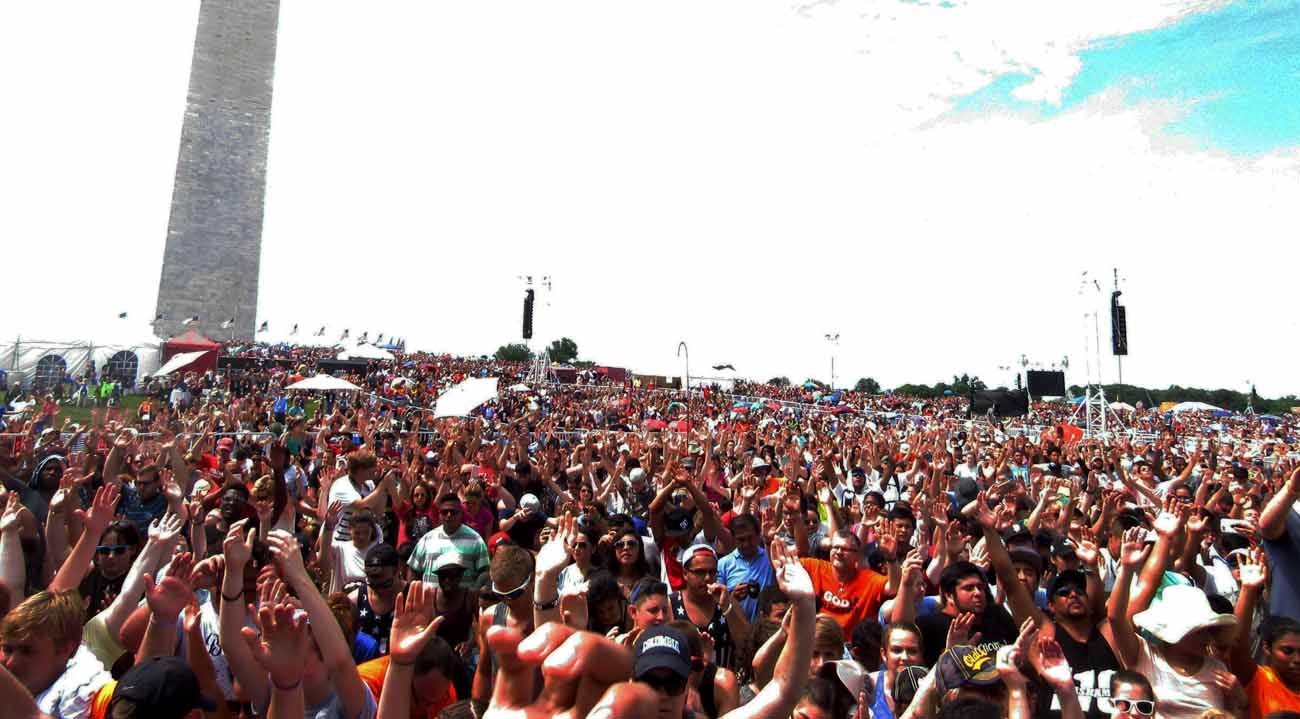 WASHINGTON (CNS) — About 350,000 people of all faiths gathered together on the National Mall July 16 for “Together 2016” to declare that Jesus changes everything and asking him to “reset the generation.”

To enter the event, held near the Washington Monument, people lined up outside the gates for what seemed like miles.

“Together 2016” lasted from 9 a.m. to about 4 p.m. Originally, the event was scheduled to last until 9 p.m., but some news reports said that local officials had requested it end earlier because of the high heat index.

“We want people to know today that Jesus welcomes anyone who comes to the table of grace. There, you can experience forgiveness,” organizer Nick Hall, 34, told the crowd. “Jesus does not have a big fence over his house saying you come in you don’t. God will you heal our nation and gather leaders around the world so that they too can turn their attention toward this gathering.”

Hall is founder of a student-led evangelism movement called PULSE, based in Minneapolis, and the organizer of “Together 2016,” as the event is called.

Former NFL player Tim Tebow made an appearance, and a letter from President Barack Obama was read to those present.

“I send greetings to all those gathered at ‘Together 2016’ in times of joy and uncertainty alike Christians have turned to Jesus,” Obama said. “As you come together today to pray, to learn, to share, to love and reset you have my best wishes for a memorable event.”

Steven Nieves, 24, from South Brunswick, New Jersey, who was part of Christian Missionary Alliance, said a group of his friends invited him to attend. He was especially excited to see Mineo, a Christian hip-hop artist. He told Catholic News Service that “when worship becomes bland, Mineo cuts through.”

Tebow, in his remarks, challenged those present who don’t know Jesus to get to know him.

“Jesus wants a personal relationship with you. He loves you so much. He died for you and if you were the only person on this earth, he would have died just for you. If you already know Jesus and are a believer, I’m going to challenge you to love every single person in your life.”

Kofi Opoku, 30, who is from Ghana, celebrated his 11th year in the United States at the event. He said he came to the event because “a friend told me that there were people gathering together that were hungry for God. I am also seeking to be a part of something greater than myself, which is God.”

Hall told CNS that what he was most excited about is knowing that he will hear things about the event 10 years from now.

“People will look back at this day as a day that changed their lives and hopefully shifted our nation,” he said. “With the amount of prayer that went into the event, I’m sure God will do that.”

Mathew Hammond, 22, of Lexington Park, Maryland, was accompanied by four family members. He had heard about “Together 2016” when his mom saw a Facebook post about the event.

Hammond said he thinks that the importance of “Together 2016” is showing “that we are a Christian nation. What caught my attention was that right after the event ended, a group of people started a prayer circle, and they started adding people with probably about 60 people. It was just so out of the ordinary and great to be a part of.” 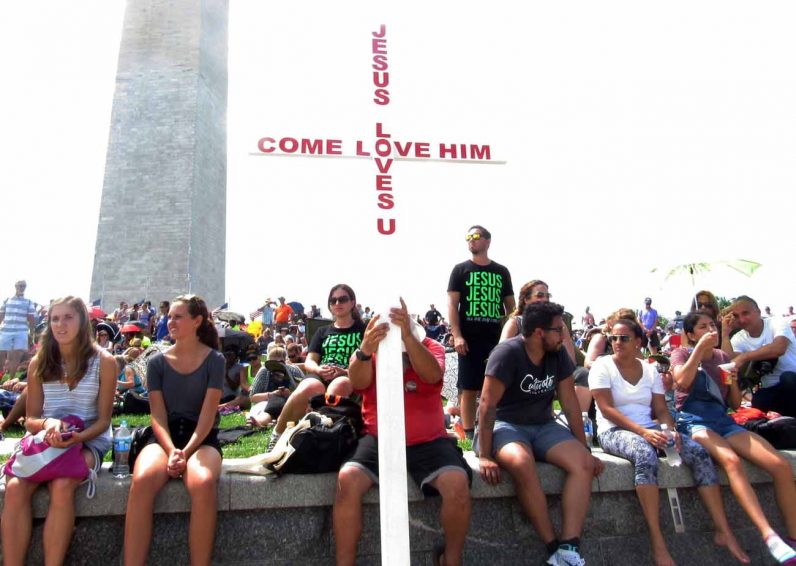 A man holds a cross during the “Together 2016” event in Washington July 16. (CNS photo/Ana Franco-Guzman)

NEXT: Nuns on the Bus seek ways to close economic gaps for struggling families