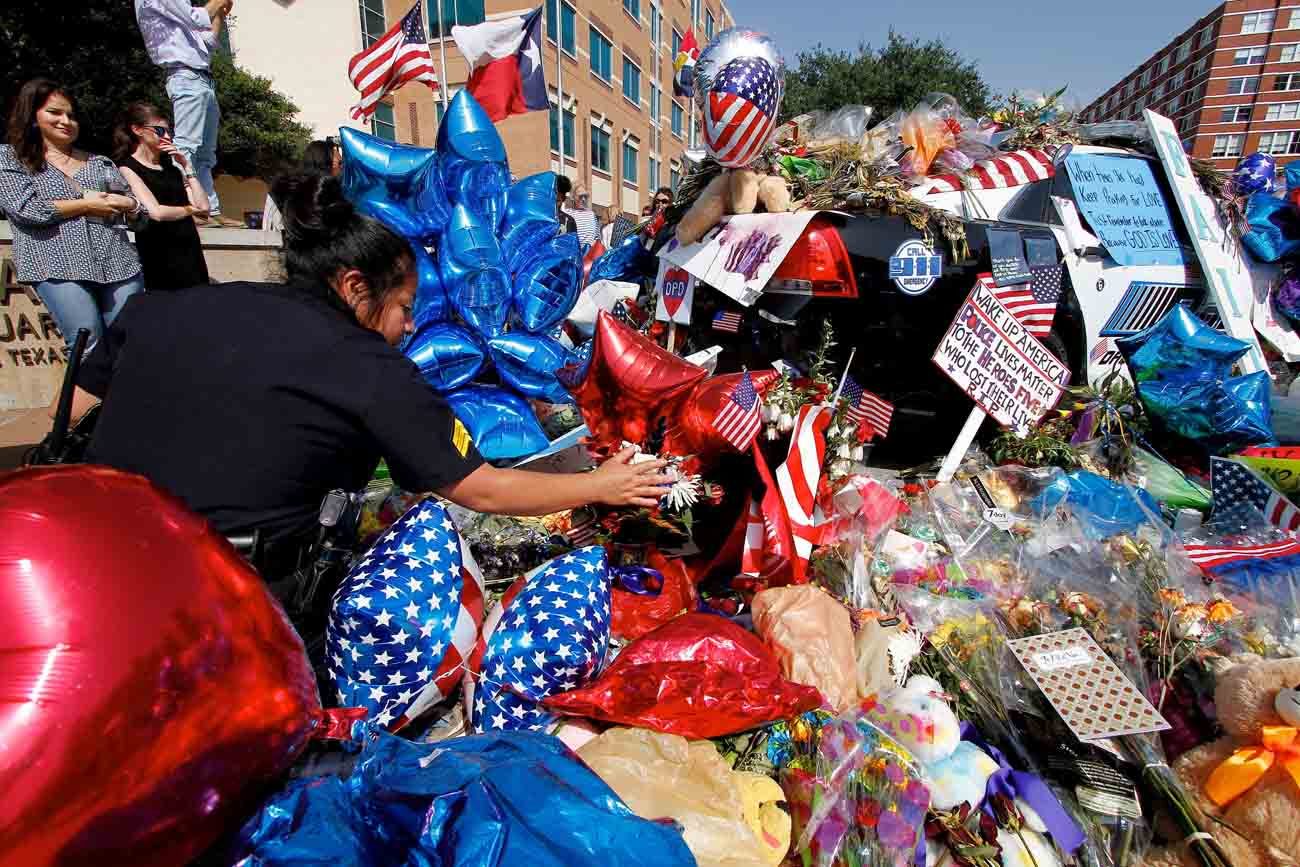 DALLAS (CNS) — It started with a single candle.

Notes of encouragement, support and heartfelt condolences followed as did streamers, flowers, banners and balloons. A grieving city heaped its well-wishes, its heartache and its unending support upon a pair of squad cars parked in front of the Dallas Police Department headquarters.

The ever-growing mound became more than just a memorial for five Dallas officers who lost their lives when a gunman opened fire at a downtown Black Lives Matter protest July 7. It became a sign of hope — a symbol of unity.

“I have come to give thanks for everything they have done in Dallas,” Yolanda Miranda of Dallas told The Texas Catholic, newspaper of the Diocese of Dallas.

Detective Albert Sanchez visited the memorial the day after the shooting and was overwhelmed by the support he witnessed, although he still mourned the death of his comrades.

“I can’t tell how many children have come up to me to give me hugs and shake my hand,” Sanchez said. “Some say they want to be like me when they grow up.”

Covered with stuffed animals, poster boards, thousands of flowers, balloons, wreaths, thank-you cards, flags and police badges of departments around the U.S. and Canada, the two squad cars became unrecognizable. People gathered and took pictures of the growing memorial and mourned for the fallen officers, as the media from various news stations surrounded the memorial.

The Bravo family drove from Burleson to show their gratitude to not only the fallen officers, but all men and women who wear the uniform.

“We came to show our children the good that can come of people,” German Bravo said. “Something tragic happened, and I want them to see that good always defeats evil.”

Children dropped off superhero toys, and letters of recognition were taped to the vehicles. Religious organizations set up boards with messages and faith verses. A man-made wooden cross lay between the two vehicles with the words of Colossians 1:20, “Peace by the blood of his cross.”

On a business trip from Houston, Ben Terry was staying in the Westin Hotel as the violence unfolded outside July 7. He visited the memorial along with his wife, Sara, who flew into Dallas to be by his side.

“Being so close to the action, hearing it all outside my window,” Terry said, “I wanted to come and honor the people who protected me that night.”

Grace Sunderland and a youth ministry group brought a dozen roses and posters that offered words of encouragement. Sunderland said she hoped many people lean on Christ in this time of grief and tragedy.

“We felt the city was just hurting,” Sunderland said. “We wanted to come out here to show our support and that we are praying for them.”

Other memorials were scattered at police stations around the city. At Dallas Area Rapid Transit headquarters in Oak Cliff, a memorial honored its own Officer Brent Thompson. People left candles and flowers on the three squad cards as well as a message for the Thompson family.

“The Hall Family thanks all DART Police for your service and sacrifice. May God bless you, R.I.P Brent Thompson,” it read.

At the memorial at police headquarters, people from around the nation and the world continued to visit days after the tragedy. Five black flags with a blue line in the middle hung near the memorial, representing the lives lost.

A city still mourns, but those fallen officers’ peers press on.

“I expect our brothers and sisters in blue to show up to work and still protect the citizens,” Sanchez said. “We have a job to do.”

Perez Faz writes for The Texas Catholic, newspaper of the Diocese of Dallas.

NEXT: Hundreds of thousands crowd nation’s capital to celebrate faith in Jesus