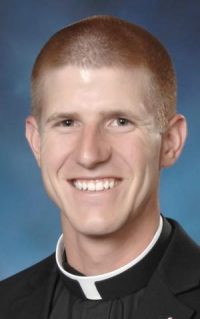 WICHITA, Kan. (CNS) — Brian Bergkamp, a seminarian from the Diocese of Wichita who was studying at a Maryland seminary, is believed dead after saving the life of a woman who fell into the Arkansas River July 9.

By mid-day July 12, he remained missing. Friends and family members remember were holding vigils to pray for the recovery of his body.

Bergkamp, 24, was among five people traveling in separate kayaks when all got caught in turbulent waters. According to The Wichita Eagle newspaper, Bergkamp jumped from his kayak to save the woman before getting pulled under himself. He was not wearing a life jacket. The other kayakers made it to shore.

“I knew Brian to be an exceptional seminarian, well on his way to demonstrating so many of the qualities needed to be a good and faithful priest,” Wichita Bishop Carl A. Kemme wrote in an email to The Catholic Advance, the diocesan newspaper. “I personally looked forward to the day when I might be able to ordain him.”

Bishop Kemme said Bergkamp was quiet, dedicated, diligent in his work and studies, and presented himself always with a sense of decorum and maturity, well beyond his years. “I was looking forward to how God would use him as a priest in the Diocese of Wichita. Now, we must all mourn his much anticipated ministry and the many fruits we all knew would be abundant by his priestly life and ministry.”

Life on this side of heaven is full of mysteries, contradictions and ironies, Bishop Kemme said. “Brian’s untimely death is full of these mysteries, which must wait until heaven to be solved.”

Bergkamp had just finished his second year at Mount St. Mary’s Seminary in Emmitsburg, Maryland, which is in the Archdiocese of Baltimore. He is the son of Ned and Theresa Bergkamp of Garden Plain and would have been ordained to the transitional diaconate at the end of the upcoming school year. His brother, Andy, was ordained to the transitional diaconate in May. He is preparing for the priesthood for the Diocese of Wichita at Mundelein Seminary in Mundelein, Illinois.

“Brian’s death is a great tragedy and a great loss, not only for his family and friends,” said Baltimore Archbishop William E. Lori, “but to all who knew him and to the church he was so generously seeking to serve.”

In an email to the Catholic Review, Baltimore’s archdiocesan news outlet, Archbishop Lori said Bergkamp’s “heroic and brave actions” speak to the “great character and to the wonderful priest I’m sure he would have become.”

“Though his dream of serving others as a priest is no longer possible,” Archbishop Lori said, “Brian continues to bless others through his selfless example and legacy.”

Msgr. Andrew Baker, rector of the seminary, remembered Bergkamp as a “quiet, but very effective leader.”

“He was a thoughtful and prayerful young man,” Msgr. Baker told the Catholic Review. “He was extremely reliable and hardworking.”

Bergkamp had served as a sacristan at Mount St. Mary’s, the priest said.

The circumstances of Bergkamp’s death show that he knew the depth of what it meant to be a Christian and a priest, Msgr. Baker said.

“It was self-giving love,” he explained. “He didn’t have to think twice before he acted (to save another’s life).”

Derek Thome, a seminarian at Mount St. Mary’s Seminary from Viola, Kansas, said Bergkamp was a man of dedication with a big heart who would do just about anything for anyone — as long as it would help them.

“It didn’t matter what he had going on, his life was spent thinking of others first,” he told The Catholic Advance. “Brian died doing what he went to seminary for, to save souls.”

Bergkamp did so many things around the seminary, Thome said, adding that he was always keeping busy fixing things. “The joke goes that Brian was the only reason the seminary building still stands!”

Bergkamp showed a true priestly quality in his last moments, Bishop Kemme said, apparently saving the life of another while risking his own. “This all took place on the weekend when we heard the parable of the good Samaritan. Brian was living that parable in his last moments. No one could ever hope for or expect a greater homily than this!”

In addition to keeping Bergkamp’s family in prayer, Bishop Kemme asked the faithful to keep all of the diocese’s seminarians and priests in their prayers. “Pray fervently for more seminarians like Brian, so that others will come to take his place. More than likely, Brian’s heavenly service will help to make this happen, according to God’s providence.”

Riggs is editor of The Catholic Advance, newspaper of the Diocese of Wichita. Contributing to this story was George M. Matysek in Baltimore.