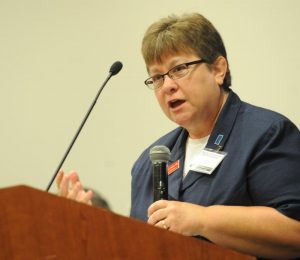 Sister Ruth Harkins, associate campus minister for graduate and professional students at The Catholic University of America in Washington, speaks at the university July 7 during a national symposium on domestic violence. (CNS photo/Dana Rene Bowler, CUA)

WASHINGTON (CNS) — Thirty-three percent of women in the U.S. have been victims of domestic violence, said clinical psychologist Christauria Welland, who spoke during a conference on domestic abuse held at The Catholic University of America July 7 and 8.

Welland, who specializes in intimate-partner abuse and who addressed the topic at last year’s World Meeting of Families in Philadelphia, appeared at “Hope, Help and Healing: A Catholic Response to Domestic Violence Abuse and Violence,” speaking on the effects of trauma on people who experience abuse and violence.

She was joined on a panel by Mindy Thiel, director of Chesapeake Counseling Associates, who has overseen the Safe Start Program, a counseling program through the Montgomery County Sheriff’s Office Family Justice Center in Maryland, for children who have been exposed to domestic violence.

Welland mentioned that while the majority of victims of domestic violence are women, a small percentage are men.

“Twenty-eight percent of men in the U.S. have been victims of sexual or physical domestic violence at some point in their life,” said Welland. “(The impact) is three times greater for women than it is for men.”

“Injuries, as a result of physical violence can be bruises, broken bones, and a person can be shot,” said Welland. “The health consequences can be physical, sexual, emotional and the injuries can be from minor to severe.”

Not only does domestic violence affect the victim, but harm also can be brought upon the children.

“Children can also be injured during violent incidents,” said Welland, “if the victim has the child in their hands, or if children are trying to intervene, which they often do.”

During the panel, Thiel raised the issue of the effects of trauma on children who witness such violence between intimate partners.

She noted her work at the Family Justice Center, and how it is open to all families who are experiencing domestic violence in the household.

“Every child regardless of race, income, immigration status, can receive counseling services through our program,” said Thiel.

The U.S Department of Justice estimates that 15.5 million children are exposed to domestic violence each year, she said.

Forty percent of children who are exposed to domestic violence were present while the incident happened, said Thiel.

Many of the abusers, she said, receive full or partial custody of their children.

Thiel said when she works with the children of victims of domestic violence, she often has to explain to them the feelings they may have toward the abuser.

“Mostly children experience ambivalence. (We) have to explain to a child why they still love someone who is abusive, is very complex,” she said. “(Children) experience things in black and white and they have trouble trying to figure out why they feel so much fear toward one parent, but at the same time, love them as well.”

She continued to explain the effects on the relationship between a child and a parent who is an abuser.

Welland addressed the mind of the abuser and how abusive behavior can be cyclical.

“A lot of people who have been exposed to violence, who have had a father who was violent have decided to never be violent, and they have done so,” she said. “The perpetrator of today, in many cases, not all, could have been the victim of child abuse and neglect in their family of origin.”

Welland, a bilingual clinical psychologist in private practice in San Diego, is the founder of Pax in Familia, an international Catholic ministry dedicated to the prevention of violence and abuse in Catholic families.

She said “violence is a learned behavior,” and can be corrected through proper therapy.

“Therapy is an experience of being loved by another human being,” she concluded. “If I don’t love these people, I can’t help them. I need to be able to understand and I need to have enough empathy where we can work together and I feel as though I actually want to hear what they have to say.”

More than 350 participants from across the country registered for the event, which was designed for clergy and pastoral leaders who want to assist people harmed by domestic abuse and violence in their communities.

Sessions themes were drawn from recommendations found the U.S. bishops’ 2002 pastoral statement “When I Call for Help: A Pastoral Response to Domestic Violence Against Women.” The document was an updated, revised version of their 1992 statement.

“Violence in any form, physical, sexual, psychological, or verbal, is sinful; many times, it is a crime as well,” the document said. It urged priests and parish personnel to see themselves as “a first line of defense for women who are suffering from abuse,” noting that even when abusers try to isolate their victims from other social contacts, “they may still allow them to go to church.”

Also, it said, the church should offer aid to the abusers who, like their victims, “need Jesus’ strength and healing.”

NEXT: Kansas seminarian believed drowned after saving life of kayaker on river