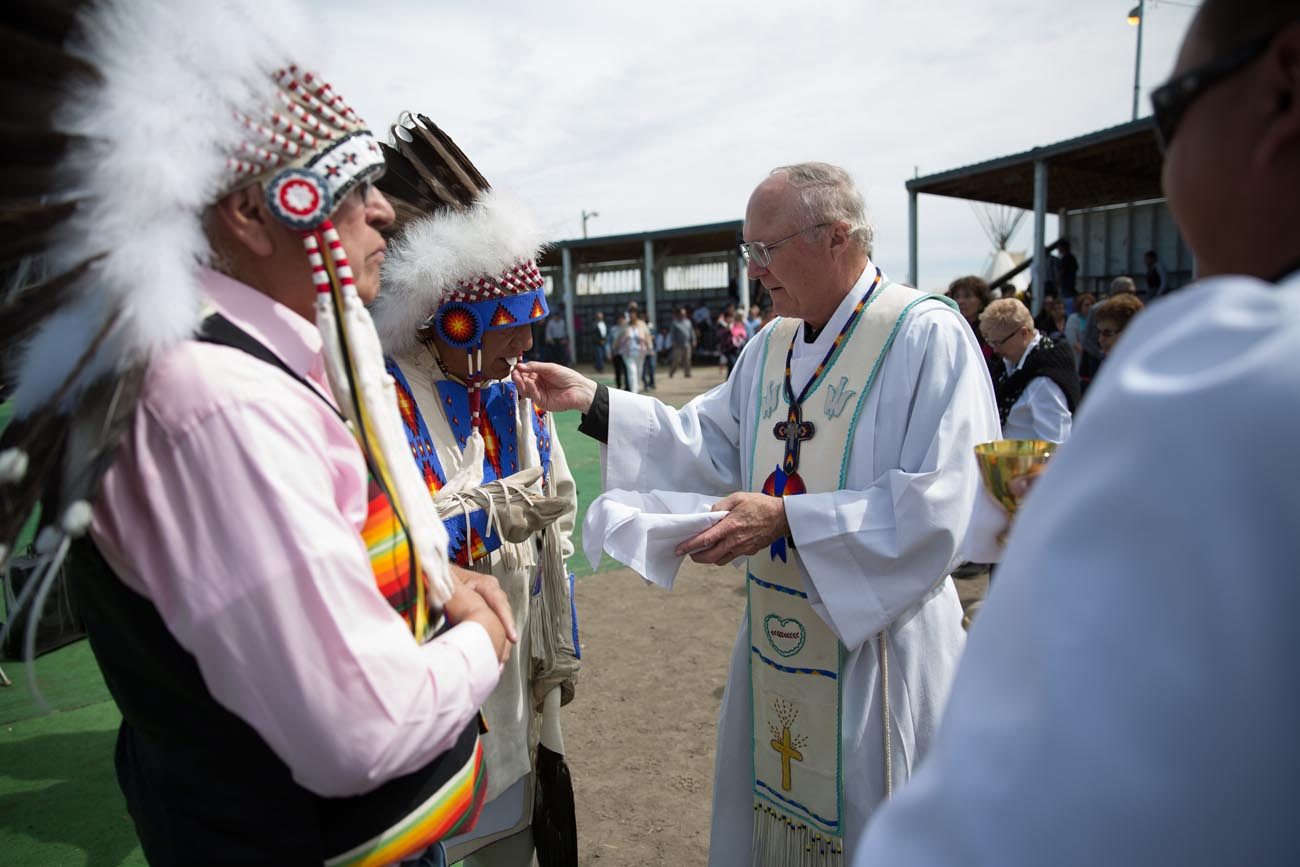 BROWNING, Mont. (CNS) — Helena Bishop George L. Thomas said at a special Mass for Native Americans that mercy may not “come easily,” but “it’s a gift that sets our hearts free.”

“Mercy transforms us when we need it most,” he said in his homily.

He asked the congregation to “call to mind those who have wronged you, hurt you and slighted you. Forgive them. Give up resentment. Give a friendly attitude to those who are not entitled.”

“Mercy doesn’t come easily and may have a personal cost,” he acknowledged. “But it’s a gift that sets our hearts free, lowers blood pressure and gives our body much needed rest.”

It was the 13th time Bishop Thomas said the Mass of the annual North American Indian Days, held July 7-10. The Mass was celebrated the last day. It was the 45th year the special gathering included a Mass.

Celebrated outdoors in the festival’s main dance arbor and exploding with colorful clothing, dancing and drumming, this year’s Mass once again was a strong expression of Native American Catholicism, inculturating Catholic faith into the participants’ Native American traditions.

The liturgy, which brought together Native Americans from 50 different tribes across North America, sparkled with Indian customs and symbolism — burning sage, drummers and headdresses — and powerfully expressed the church’s wide open embrace of their gifts.

“We need to build our faith within the Indian context,” said Harry Barnes, a parishioner of Little Flower Parish in Browning and chairman of the Blackfeet Tribal Council. “Even though the Catholic Church is 2,000 years old, it is the ‘new kid on the block’ for us natives. We need to combine our local cultures into the church. Catholicism widens our path.” 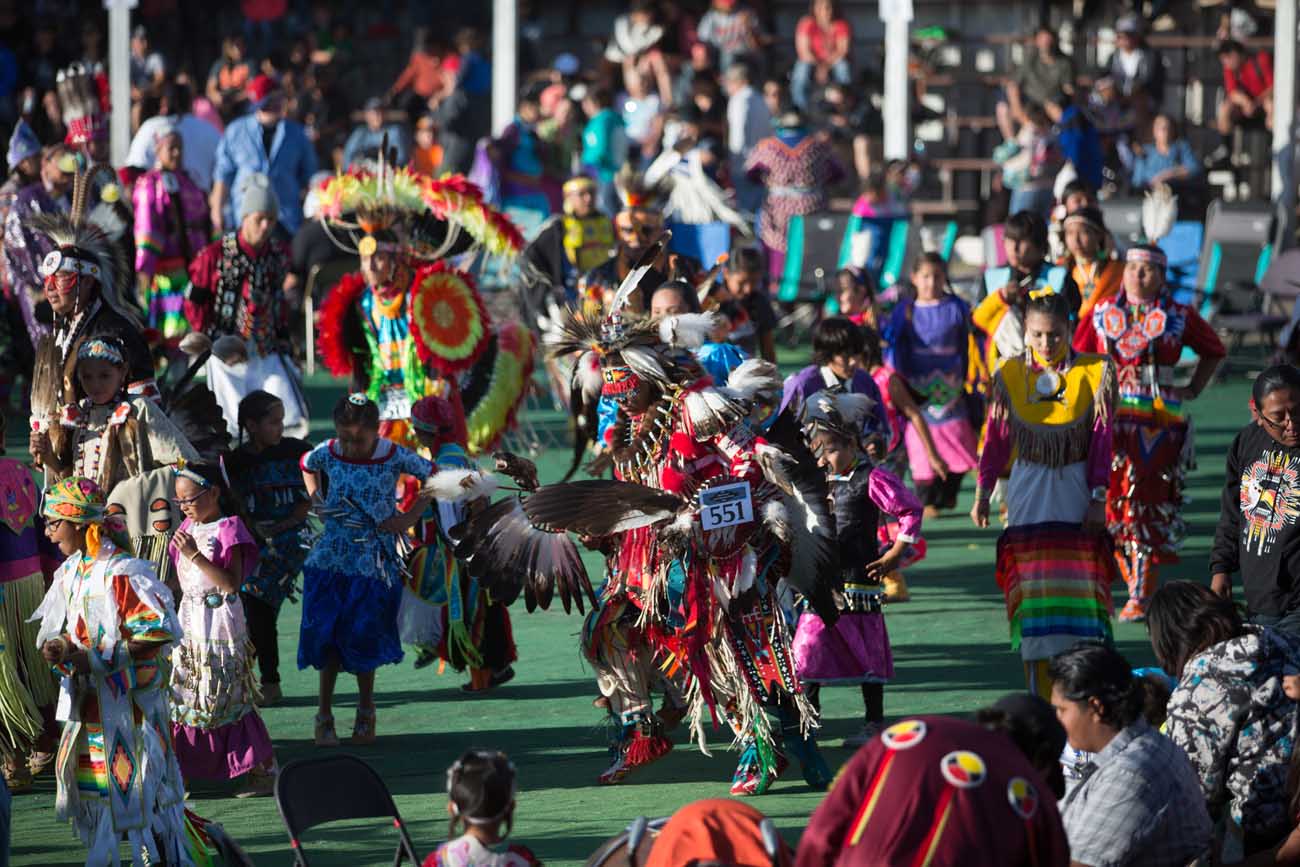 Native Americans representing 50 tribes from across the United States and Canada gather for a powwow July 9 during North American Indian Days in Browning, Mont. The event has been running for 65 years. (CNS photo/courtesy Catholic Extension)

An estimated 20 percent of Native Americans are Catholic. In recent decades, the Catholic Church has made significant efforts to incorporate Indian traditions into Catholic liturgies, and the Diocese of Helena has made a strong commitment to ministries with Native Americans.

Celebrated this year for the 65th time, Indian Days is a four-day powwow that draws about 10,000 participants. Hosted by the Blackfeet Nation, Native Americans from every region of the country and Canada attended. They came together — many dressed in spectacularly elegant and intricately decorated native attire — to dance, play games and socialize in the arbor, a stadium-like arena.

Most attendees stayed right at the campgrounds, setting up hundreds of tipis and tents throughout the grounds. Food booths were scattered about, as well as arts and souvenirs tables and a few carnival-like rides for children.

The festival included a parade, which weaved through the town of Browning, featuring businesses, organizations, politicians and families. The parade had vehicles of all shapes, overflowing with signs, decorations and waving passengers, and horses were interspersed throughout. During the parade, pounds of candies were thrown from the passing cars to the children scooping them into bags.

Bishop Thomas greeted the crowd of about 400 by saying, “It is one of the high points of my year to be with the Blackfeet and to see how much they love and celebrate the Lord.”

A native of Montana, Bishop Thomas has a deep love for the state and its people. He is especially close to the Native Americans and has earned their respect.

One of the Blackfeet elders, 92-year-old Gertie Heavy Runner, who attends the festival annually and had a place of honor at the Mass, said of the bishop, “We have given him the name ‘Holy Warrior’ because of his courage, wisdom and integrity.”

Bishop Thomas is keenly aware of the huge challenges that Native Americans face. He understands their struggles with poverty, despair, substance abuse, domestic violence and the tensions around cultural identity and survival.

Sharing his concern is Father Ed Kohler, one of the priests who concelebrated Indian Days Mass and the pastor of Little Flower Parish in Browning.

The town of Browning, in the northwestern corner of Montana and close to the Canadian border and Glacier Park, is located in the Blackfeet Reservation. The reservation, established by treaty in 1855, runs along the eastern slopes of the Rocky Mountains, comprising 1.5 million acres, an area larger than the state of Delaware.

With more than 17,000 members, about half of whom live on the reservation, the Blackfeet Nation is one of the 10 largest tribes in the United States.

Father Kohler, the only Catholic priest within 30 miles of Browning, has been pastor since 1982. He sees the struggles of the Indians on the reservation. Recently, he said funeral Masses three days in a rows for young victims of suicide. Everyone seems to know someone who has died violently. Especially for young people, life on the reservation is tough. Thirty percent of its people live below the poverty line, and unemployment hovers around 80 percent.

Although he said a “dark cloud” hangs over the reservation, he believes that the Catholic Church can help, he told Extension magazine, which is published by Chicago-based Catholic Extension.

At Little Flower — a parish of about 250 regulars and another 250 nonregulars — he initiated the Cursillo movement, a series of retreats and workshops, to help strengthen the faith of parishioners. Across from the church, he also helped found the grade school, De La Salle Blackfeet, which has 70 students in grades four to eight.

Catholic Extension is a national fundraising organization founded in 1905 to support the work and ministries of U.S. mission dioceses, like the Diocese of Helena.

The diocese was established in 1884 and originally encompassed the whole state; Catholic Extension provided its first church building grant there in 1911. The diocese now covers more than 50,000 square miles, which is almost double the size of Ireland. (The rest of the state comprises the Diocese of Great Falls-Billings, established in 1904.)

Over the years, Catholic Extension has granted more than $20 million in today’s dollars to the diocese. Sixty-six of these grants have been related to Native American ministry, half going to Little Flower Parish. In the last five years, Catholic Extension has extended $1.6 million to the diocese, a total that is in the top 10 of all dioceses that the organization supports.

Catholic Extension has been a consistent supporter of Catholic Native American ministries around the country. The organization provides more than $1 million annually to support such ministries in 20 dioceses.

In his diocese, Bishop Thomas also has been dedicated to investing in young people through youth, young adult and campus ministries. The result is youth actively engaged in the church and a growing group of vocations. Currently, the diocese has 14 seminarians.

PREVIOUS: Catholics seek to change narrative of violence for denizens of Holy Land

NEXT: In keynote, Courage’s executive director focuses on sacrifice of chastity