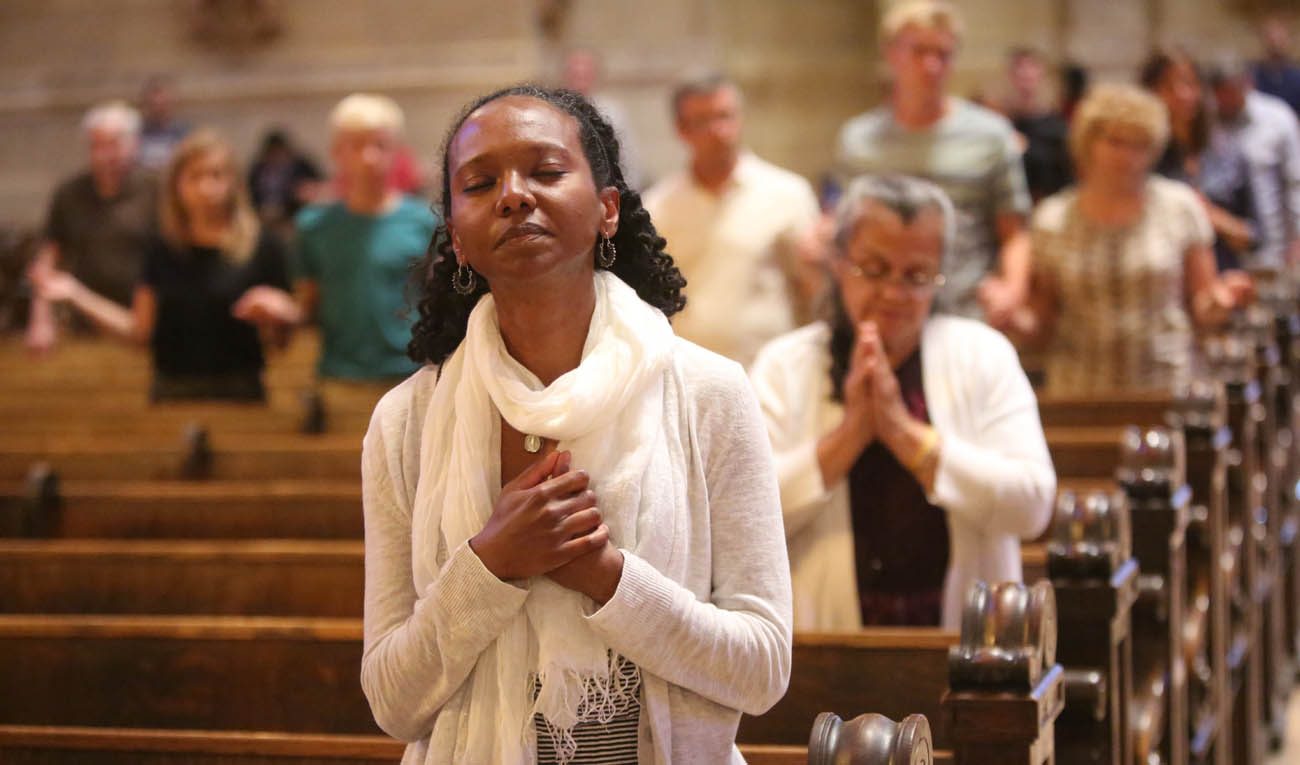 Eleni Demissie prays during a July 8 Mass for peace and justice at the Cathedral of St. Paul in Minnesota. The Mass was offered in response to the July 6 shooting death of St. Paul resident Philando Castile by a police officer. (CNS photo/Dave Hrbacek, The Catholic Spirit)

ST. PAUL, Minn. (CNS) — Archbishop Bernard A. Hebda of St. Paul and Minneapolis focused on the need for unity and healing in the Twin Cities and country during a Mass for peace and justice July 8.

“Sacred Scripture reminds us that nothing is impossible with God,” he said at the Mass, which drew about 250 people to the Cathedral of St. Paul in St. Paul.

“We come before him at this Eucharist to ask him to heal the divisions that weaken us as community,” he said, “that he strengthen us when we tend to lose hope, that he enlighten us when we fail to see his image in one another, and that he use us, his church, as the field hospital he desires to tend the wounds of those who are hurting at this difficult time.”

The Mass was offered in response to the July 6 shooting death of St. Paul resident Philando Castile, an African American, by a police officer during a traffic stop. During the liturgy, Archbishop Hebda prayed for the people most affected by Castile’s death. The shooting came a day after police shot and killed an African American man in Baton Rouge, Louisiana.

Celebrated at the time of cathedral’s regular 5:15 p.m. daily liturgy, it was a special Mass for the Preservation of Peace and Justice found in the Roman Missal. The prayers focused on peace, unity and hope amid darkness and suffering.

Archbishop Hebda began his homily with the first part of 1 Corinthians 12:26: “If one part of the body suffers, all the parts suffer with it.” He tied it to those suffering from the deaths of Castile and the Dallas officers shot by a sniper July 7 during a protest march. 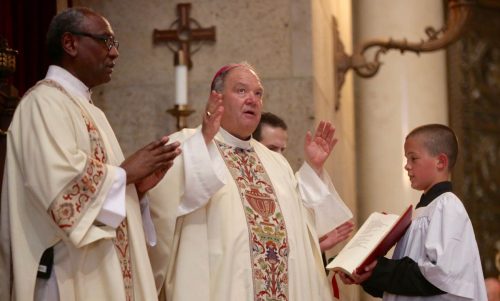 Deacon Phil Stewart looks on as Archbishop Bernard A. Hebda of St. Paul and Minneapolis reads a prayer during a July 8 Mass for peace and justice at the Cathedral of St. Paul. (CNS photo/Dave Hrbacek, The Catholic Spirit)

He said people feel the pain of those who are treated differently because of their race or country of origin, and of police officers “who feel that they are being misjudged and underappreciated.”

“Feeling that pain in our community and beyond, it’s easy to feel overwhelmed, helpless, anxious, and yet it is precisely in those moments that we know our own weakness that we have the opportunity to make known the love and strength of our God,” he said.

He said that for people of faith, Mass is “the way we know best” to come before God, “to seek his consolation, his guidance, his strength, asking him to use us as repairers of the breach and restorers of streets to live in.”

He urged the congregation to work toward peace and unity by first examining their consciences and asking for forgiveness for the times they have caused division and misjudged others.

The archbishop also reminded Massgoers that it is the Year of Mercy and “we have a God that not only forgives us, he bestows his Spirit upon us.”

At the end of Mass, he asked people to continue to pray for community leaders as they make difficult decisions.

Eleni Demissie, a health care data analyst and cathedral parishioner, said she regularly attends daily Mass there, but it was meaningful to have that evening’s liturgy respond to Castile’s death.

“I’m saddened by what’s going on right now,” she told The Catholic Spirit, the archdiocesan newspaper. “It’s really a privilege to be able to offer up whatever we’re going through. One thing I know to do is pray, so I’m glad to be able to contribute that way.”

Asked whether being a woman of color affected the way she responded to Castile’s death, she said, “I approach it as a Christian.”

Sitting a few pews behind Demissie was Sharon James-Abba, who was wearing a white T-shirt with “Philando Castile” printed on the front.

She said she received the T-shirt the night before at a vigil organized by Black Lives Matter that began outside J.J. Hill Montessori Magnet School in St. Paul, where Castile worked as a cafeteria supervisor, and evolved into a protest at the governor’s mansion six blocks away. Wearing the T-shirt was a sign of support, she said.

James-Abba, who is Baptist and lives near the cathedral, said she heard about the Mass on the news and was looking for a place to be quiet.

“It’s just too much,” she said of Castile’s death and other violence in the city and country. As a black woman, mother and grandmother, the recent events made a deep emotional impact on her.

“I just needed to come and hear something uplifting,” she said of the Mass.

NEXT: Catholic response to domestic violence focus of talks