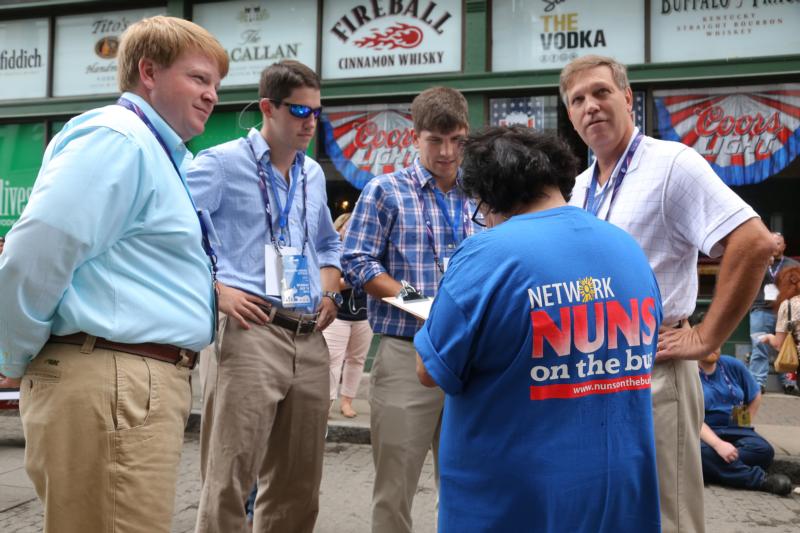 Sister Clare S. Lawlor, a Sister of St. Agnes, who is a professor at Lewis University in Romeoville, Ill., collects information from bystanders July 18 outside the Republican National Convention in Cleveland. (CNS photo/William Rieter)

CLEVELAND (CNS) — Sister Julie Ann Krahl knew that a cup of lemonade on a hot summer day can go a long way toward making friends.

So she offered a refreshing drink from a cooler pulled along in a child-size wagon and talked with people on the streets of downtown Cleveland who were in town for the Republican National Convention July 18.

She wanted to learn about their fears and hopes for the country as the final months of the 2016 presidential campaign loomed.

Most people were happy to take the lemonade and talk with Sister Julie Ann, a member of the Congregation of the Sisters of St. Agnes in Fond du Lac, Wisconsin, and more than a dozen other women religious who were part of the fifth Nuns on the Bus tour.

Nuns on the Bus, which left Madison, Wisconsin, July 11, was timed to be at the Republican National Convention in Cleveland and then July 26-29 in Philadelphia, site of the Democratic National Convention. Its theme is “Mend the Gaps, Reweave the Fabric of Society,”

The idea behind the “lemonade ministry” was to “start a dialogue of healing,” explained Sister Simone Campbell, executive director of Network, a Catholic social justice lobbying organization that sponsored the bus tour.

While some people were concerned that one major party candidate — Democrat Hillary Clinton — or the other — Republican Donald Trump — would end up in the White House, Sister Julie Ann said she learned that most people want to see the country unite to better respond to its challenges.

“That’s what we’re looking forward to, comparing the results at the Democratic and Republican conventions. We are looking for what are the similarities. How do we mend these gaps? Because if you have common footing, you can move forward together,” Sister Julie Ann told Catholic News Service along a bustling East Fourth Street, two blocks from Quicken Loans Arena, the convention venue.

Those interviewed by the women religious talked about their concerns over legal immigration, education for children, escalating health care costs and growing racial violence. Some answers were rooted in people’s evangelical faith; parents wanted a bright future for their children; others offered purely a political point of view.

Two groups of sisters — named Curiosity 1 and Curiosity 2 — walked throughout downtown. Each group ended up talking with hundreds of people.

Sister Simone, a member of the Sisters of Social Service, said the chance to talk to people informally provided seemingly honest answers.

“I learned that people want to mend the gaps, that they really care about it, that they see the gaps differently,” she told CNS.

She said she was surprised to hear many people describing the polarization in politics as a disservice to the country.

“Their concerns are not that different geographically,” Sister Simone added. The realities may be different, she said, but they have the same concerns.

“In the end, we’ve come away with a sense it’s going to work out.”