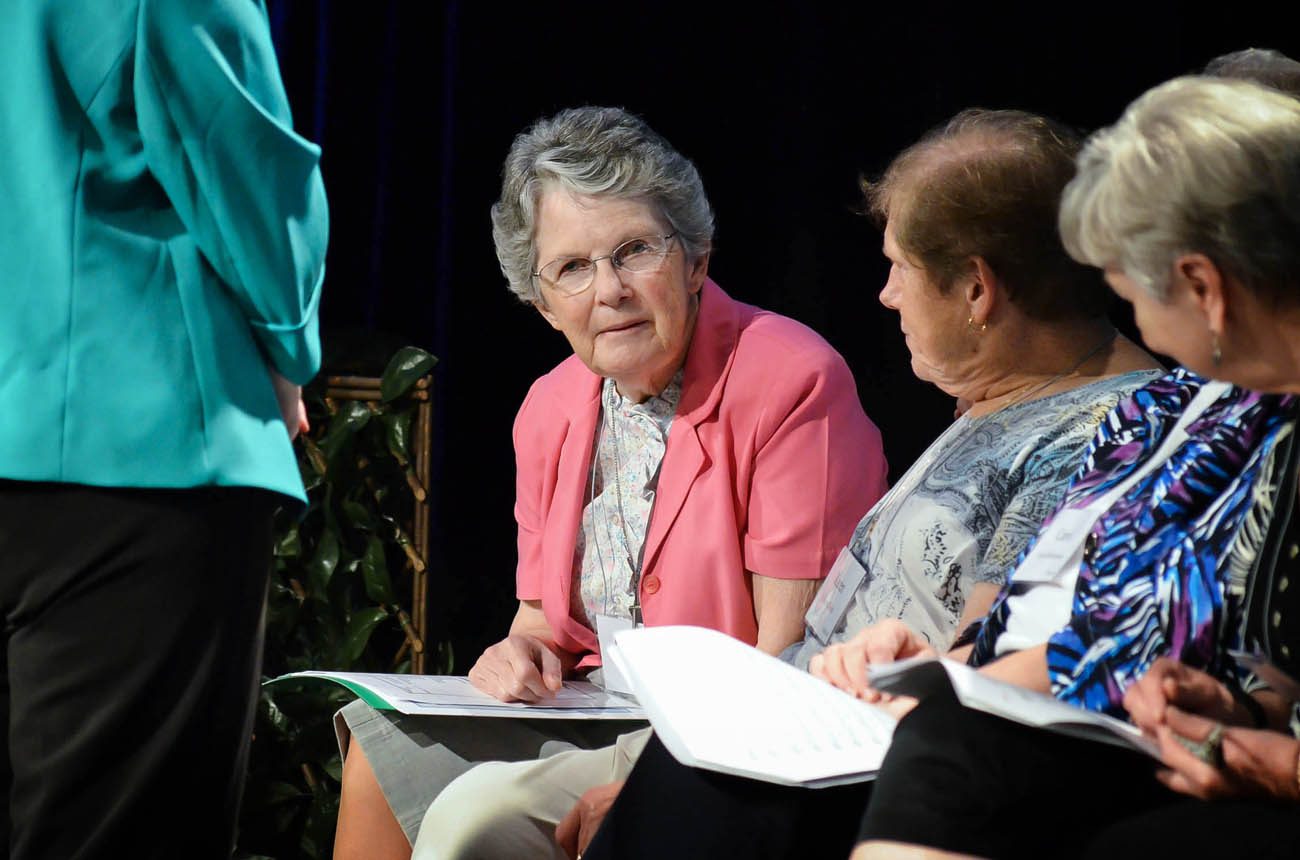 Sister Kathleen Power, a Sister of St. Joseph and assistant vocations director for the Diocese of Orlando, Fla., talks with other speakers July 9 during the 2016 conference of the U.S. Federation of the Sisters of St. Joseph in Orlando. (CNS photo/Andrea Navarro, Florida Catholic)

ORLANDO, Fla. (CNS) — The U.S. Federation of the Sisters of St. Joseph celebrated 50 years of advocating for the dignity of the human person, made in the image of God, with a July 9-12 conference in Orlando.

Over 700 individuals participated in the four-day conference, including college students who attend schools operated by the Sisters of St. Joseph, lay ministers, volunteers, and members and associates of the 16 communities of sisters.

The federation includes the sisters in all the Sisters of St. Joseph congregations in the United States who claim a common origin in the foundation of the religious order at Le Puy, France, in 1650. In the U.S. there are 4,465 sisters, 2,919 associates and 16 congregations.

Officials of the federation say it seeks to be an influence for positive change in the world while the sisters live out their vocation in their everyday ministries. A major commitment of the Sisters of St. Joseph is to improve the lives of survivors of human trafficking — a work that began five years ago in St Louis.

Florida is listed as third in the United States in human trafficking, behind New York and California.

The theme for this year’s conference was, “Our Emerging Story of Being ONE … God’s Love Unfolding,” reflecting the sisters’ charism: to love God and to love their “dear neighbor.”

Presentations focused on raising awareness of labor trafficking and the exploitation of farmworkers. The presentations also showed the participants how to advocate for victims.

Conference leaders gave attendees a call to action: to urge the Wendy’s restaurant chain to join the Fair Food Program launched by the Coalition of Immokalee Workers in 2011.

The Fair Food Program is a partnership among farmers, farmworkers and retail food companies that ensures humane wages and working conditions as basic as shade and water for workers who pick fruits and vegetables on participating farms. It gives farmworkers a voice in the decisions that affect their lives and helps eliminate abuses.

The program has won widespread recognition for its effectiveness. The Washington Post newspaper has called it “one of the great human rights success stories of our day.”

For example, the Coalition of Immokalee Workers won an increase of 1 cent per pound of tomatoes picked by migrants in Florida and sold to fast-food restaurant corporations. The modest increase has had a minimal economic impact on the corporations, but represents a significant increase for the pickers.

One of the keynote speakers at the conference was Terry Coonan, an associate professor of criminology and founding executive director of Florida State University’s Center for the Advancement of Human Rights. He also is a practicing human rights and immigration attorney.

He illustrated the indignities of human trafficking through stories of Florida cases he has handled, pro bono, and how programs like Fair Food can help. He indicated that because of Florida’s tourism and large agricultural industry, the state is a prime target for traffickers.

According to the 2015 Trafficking in Persons Report put out by the Department of State, “The risk (of human trafficking) is more pronounced in industries that rely upon low-skilled or unskilled labor. This includes jobs that are dirty, dangerous, and difficult — those that are typically low-paying and undervalued by society and are often filled by socially marginalized groups including migrants, people with disabilities, or minorities.”

Coonan, who attributes his passion for human rights to his Catholic education, applauded the efforts of the Sisters of St. Joseph and their collaboration with the Coalition of Immokalee Workers.

He suggested that one way to help fight the situation of labor trafficking is through corporate governance.

“Corporate governance,” he explained, is “acting as responsible investors, demanding accountability from the kinds of places where our communities, our religious organizations have investments. … Catholic religious sisters have led the way in this area of accountability.”

He was referring to the fact that the Congregations of the Sisters of St. Joseph have had an official presence as a nongovernmental organization at the United Nations since 1979. The sisters also have consultative status at the world body, the highest status that an NGO can have. More specifically, he acknowledged the Wendy’s stock purchased by a Sisters of St. Joseph congregation.

The purchase was to have “a basis for a working relationship with the company” as a stockholder, said Sister Mary Ellen Gondeck, justice coordinator for the Sisters of St. Joseph of Michigan.

“It is really key that we and the Immokalee workers have a place at the table to speak about our concerns and that happens when we are co-owners with companies through holding shares,” she said.

During the Orlando conference, sisters signed letters and postcards to send to Wendy’s CEO, and members were provided talking points to encourage dialogue with the restaurant’s leadership. The Coalition of Immokalee Workers is organizing a boycott of Wendy’s in September because the restaurant chain has refused to join the Fair Food Program, when most other fast-food chains have done so, and it also is shifting its tomato purchases from Florida to Mexico.

“Bad and abusive conditions continue to persist in agricultural industry,” Lupe Gonzalo, a farmworker and coalition member, told conference attendees. “There is still a lot of work to be done, but the important thing is to continue working together as consumers and farmworkers to be able to win the changes that are necessary in the fields. We have our voice and our truth.”

She said efforts to fight abuse in the industry have only been successful through the cooperation of corporations but the involvement of consumers.

Acknowledging how one person can make a difference, Sister Kathleen Power, a Sister of St. Joseph of St. Augustine and assistant vocations director for the Diocese of Orlando, said, “I had a strong experience of life exploding in the congregation. At my table, we had two young people, still in college, so excited about uniting love and (their) dear neighbor.’

“Then we had sisters who were in their 70s and 80s asking, ‘Who are some of the dear neighbors. … It made me feel so aware of the new life springing everywhere — in the young, middle-aged and old, all coming to learn, pray and take the fire back to the dear neighbor.”

Meekins writes for the Florida Catholic, newspaper of the Diocese of Orlando.