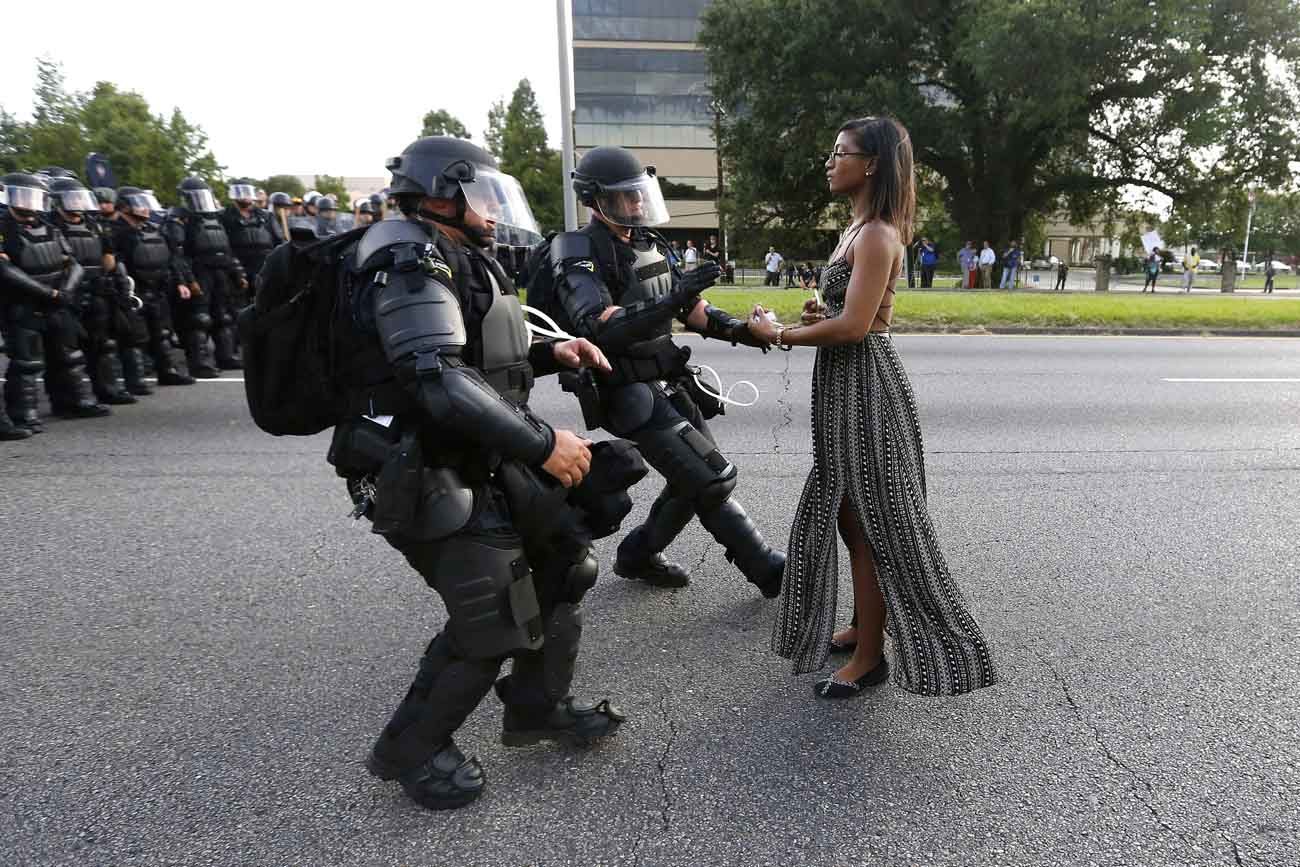 A protester is detained by Louisiana law enforcement near the headquarters of the Baton Rouge Police Department in Baton Rouge July 9. (CNS photo/Jonathan Bachman, Reuters)

WASHINGTON (CNS) — The threat of being pulled over by police and arrested for something that even “hinted of going beyond the status quo,” was very real to retired Bishop John H. Ricard of Pensacola-Tallahassee, Florida, when he was growing up in segregated Baton Rouge, Louisiana.

The African-American bishop, president of the National Black Catholic Congress, said he and his friends “lived under constant threat of being arrested” during his teenage years.

Now decades later, he said that “like everyone else, I was very dismayed” by the recent fatal shootings of Alton Sterling in Baton Rouge July 5 and Philando Castile a day later in suburban St. Paul, Minnesota, by police officers, followed by the sniper shooting July 7 in Dallas which killed five police officers.

After this surge of shootings, he said, many people have been asking: “Where do we go from here and what does all this mean?”

And Catholics are no exception. He said black Catholic leaders in particular are looking for ways to address the violence, racism and mistrust that were on full display during the early July shootings.

“They’re asking the church: ‘Give us some direction; show us some leadership. Show us our concerns are your concerns and that you are with us because we see ourselves under siege in many ways,'” Bishop Ricard told Catholic News Service.

The violent actions served as a “wake-up call for all of us, a jolt,” he added.

But he also thinks the Catholic Church has a lot to “bring to the table” to bridge racial divides, pointing out that it has a long history of speaking up for civil rights. “We just have to recapture that,” he said July 15 in an interview at the Josephites’ St. Joseph’s Seminary in Washington, where he is rector. The order, formally known as the Society of St. Joseph of the Sacred Heart, was founded to serve newly freed slaves in the United States and now ministers in African-American communities.

“We’ve got a lot of work to do” to combat racism, he said.

Louisiana Bishop Shelton J. Fabre of Houma-Thibodaux similarly said the first step is recognizing there is a problem and a lot of “understandable fear, anger and hurt out there.”

The African-American bishop, who is chairman of the Subcommittee on African-American Affairs for the U.S. bishops, noted realistically that it is “going to take a lot of time to restore trust and bring healing.”

“As Catholics we know, reconciliation is a process, there are no magic pills, as much as we might want them.”

But he also said the Catholic Church, with its diversity, can play a unique role in bringing about healing because it can “remind all that racism is a sin.”

Moving on from that, he said, requires basic steps of listening to one another and changing hearts and minds or perceived attitudes.

Bishop Fabre said taking this next step involves what Pope Francis describes as encounters — understanding the crosses others carry and the gifts they bring which enriches us.

The bishop doesn’t see this as something complicated but as part of a process that begins with people talking and listening to each other about race.

As both bishops looked to a way forward from the recent string of violence, their words echoed parts of a pastoral letter on the racial divide in the United States, written last year by Bishop Edward K. Braxton of Belleville, Illinois.

The pastoral letter emphasized that “renewed efforts must be made to re-establish bonds of trust and respect between law enforcement, the judicial system, and local communities.”

“We know that it is almost impossible for a family, a parish, or even a diocese to transform nationwide social structures that reinforce the racial divide,” Bishop Braxton wrote, calling Catholics to pray about the race issue and to begin talking about it.

“We are living through a seminal moment that has the power to transform our nation,” the African-American bishop wrote.