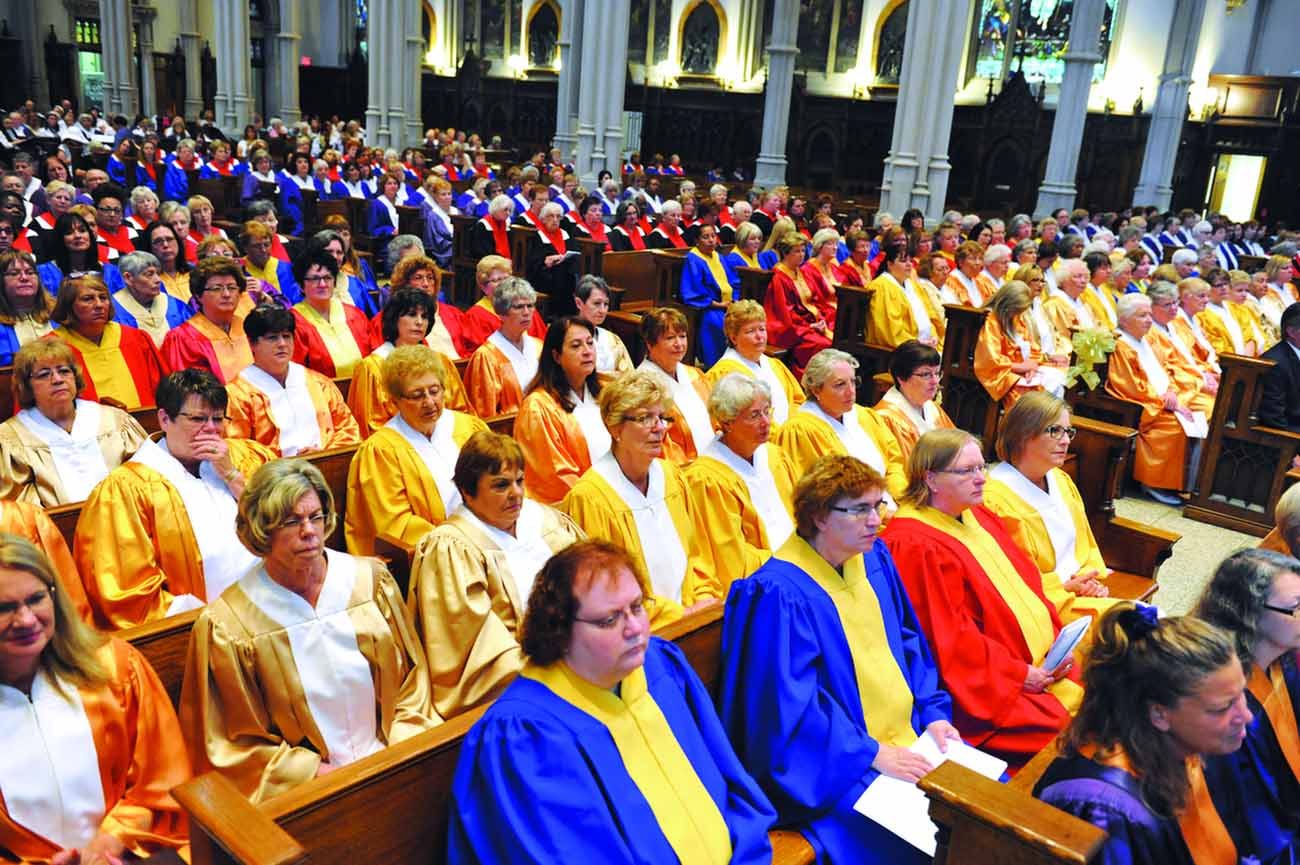 Members of the Catholic Daughters of the Americas attend a Mass July 23 celebrated at St. Paul Cathedral in Pittsburgh to install the organization's new leaders. (CNS photo/Chuck Austin, Pittsburgh Catholic)

PITTSBURGH (CNS) — Epitomizing their motto, “Unity and Charity,” 800 members of the Catholic Daughters of the Americas gathered July 20-24 in downtown Pittsburgh for their national convention.

The ballroom of the Wyndham Grand hotel looked more like a political convention than a meeting of Catholic women, with signs dotted throughout the room designating delegations from different states, nations and territories.

With more than 1,300 courts, or chapters, in the United States, Puerto Rico, Mexico, Peru, Guam and the Virgin Islands, the Catholic Daughters has become an international organization.

After a priest in Kenya, Father Peter Wambulwa, watched an Eternal Word Television Network program about the group, he contacted its U.S. leaders, who traveled there. More than 100 Kenyan women now belong to the Catholic Daughters.

Father Wambulwa was in Pittsburgh to speak at the convention and receive a sizable donation from the Catholic Daughters to aid the fledgling group. Again, charity is part of being in the organization.

“I have to say this: To be a Catholic Daughter, you have to have a very generous heart,” said Peg Rafferty, a member of St. Bernadette Parish in Monroeville, who is first vice state regent for Pennsylvania and helped with preparations for the convention. “We’ve had people that joined and then they say, ‘My goodness, they’re constantly giving,’ and I’m like, ‘Sorry, that’s what we do.'”

She said prospective members should “be willing to give time, talent or treasure.”

“If you don’t have the money, then give of your time. We eat that up as fast as the treasure,” Rafferty told the Pittsburgh Catholic, the diocesan newspaper.

The biennial convention featured a keynote speech by Bishop Donald J. Kettler of St. Cloud, Minnesota; business meetings; bylaws discussions; and presentations on Catholic Daughters of the Americas’ national charities such as the Laboure Society, Holy Cross Family Ministries, Smile Train, Apostleship of the Sea and the National Center on Sexual Exploitation.

Outgoing national regent Shirley Seyfried welcomed the newly elected national officers, who were installed at a Mass and ceremony July 23 by Pittsburgh Bishop David A. Zubik at St. Paul Cathedral in the city’s Oakland neighborhood.

The Catholic Daughters of the Americas was founded in Utica, New York, in 1903 as a women’s auxiliary of the Knights of Columbus. They were called the National Order of Daughters of Isabella. The organization has about 68,000 members now.

Many of the current members started out as members of the Junior Catholic Daughters, girls ages 8-18 who learn charity, spirituality and teamwork.

“It’s just a hands-on group, getting the girls to work together for the good of the church because we support the church and the efforts of the Holy See,” Rafferty said.

Joanne Tomassi, a past national regent from Florida, said, “The juniors are a great, great way to start the girls. It’s a really good opportunity for them to be in a group that is faith-based, that is common in their faith, and yet they have fun while they’re learning that. And they learn service as part of that.”

Rafferty said the hearts of Catholic Daughters members go out to the Krofcheck family, whose 27-year-old daughter, Lauren, of Amity died in June.

“She was so on fire for our Catholic Daughters,” Rafferty said. Lauren’s father, Deacon Barry Krofcheck, who serves Immaculate Conception Parish in Washington, Pennsylvania, assisted at the July 21 convention Mass in the hotel.

Catholic Daughters’ officials were happy to have Lauren involved because, as in any adult organization, getting younger members is essential to survival.

The Catholic Daughters is hoping to start more campus courts at colleges.

“There are, guesstimating, about 14 campus courts, and they serve the purpose in colleges and universities of giving a Catholic context,” said Tom Panas, Catholic Daughters’ national public relations chairman. “It’s like a mini-Catholic Daughters. But it’s important, I think, because young Catholic women, it can be difficult on campus. There’s a very secular push, and it gives them a haven, a way to be Catholic with other Catholic girls.”

Those attending the convention appeared to be a mixture of demographic groups pertaining to age, race and ethnicity, which bodes well for future growth.

But leadership roles are open to women who are willing to work hard and advance Catholic Daughters’ goals, she said.

“It’s such an amazing organization to represent, and the way people receive you and recognize the work that these ladies do.”