After rounds of terror attacks, ‘our prayer should be more insistent,’ pope says 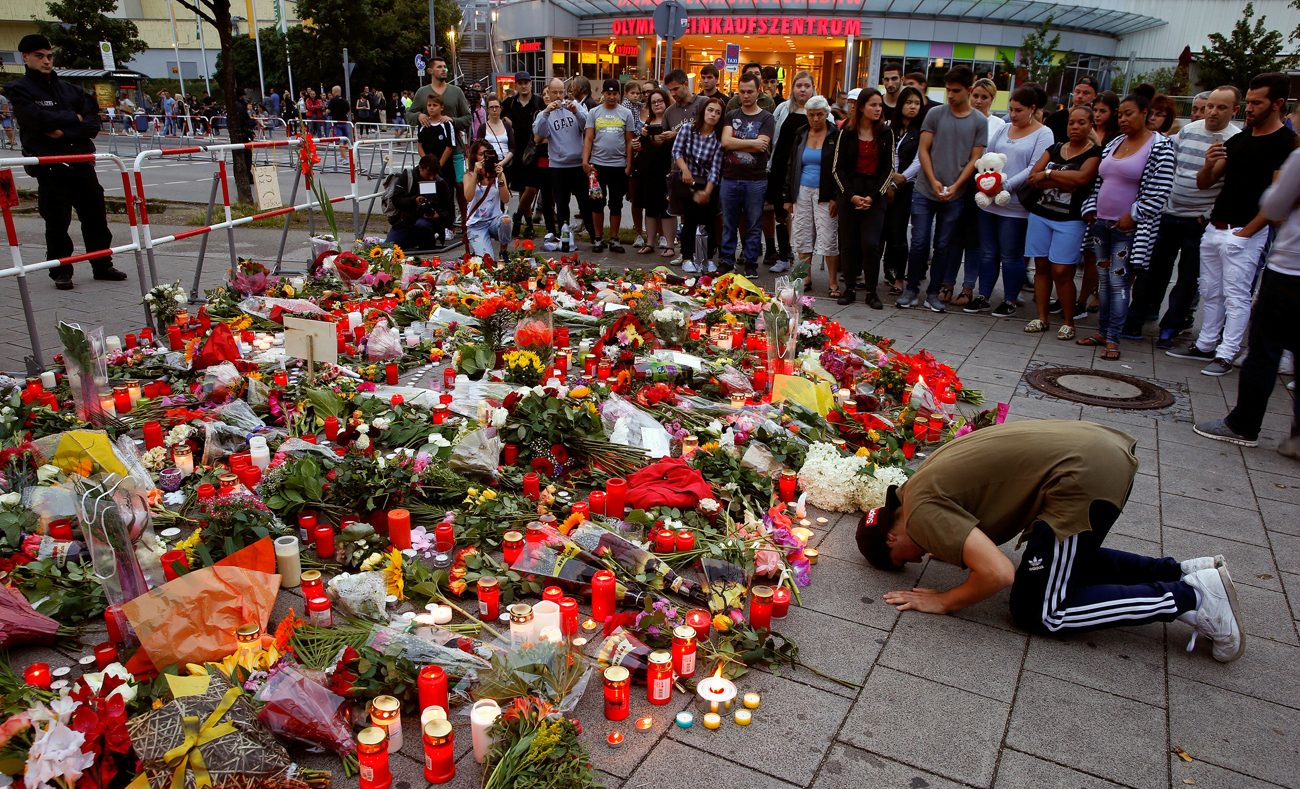 A man prays outside the Olympia shopping mall in Munich, Germany, July 23, where nine people were killed by an 18-year-old gunman. (CNS photo/Arnd Wiegmann, Reuters)

VATICAN CITY (CNS) — While recent terror attacks in Germany and Afghanistan bring sorrow and death to the world, they are also a reminder for Christians to pray fervently for peace, Pope Francis said.

After reciting the Angelus prayer with thousands of visitors in St. Peter’s Square July 24, the pope conveyed his sadness at “the tragic events in Munich, Germany, and in Kabul, Afghanistan, where many innocent people have lost their lives.”

“To the extent that the difficulties seem more insurmountable and the prospects of security and peace seem more unclear, our prayer should be more insistent,” he said.

Tragedy struck Munich July 22 when 18-year-old gunman David Ali Sonboly shot and killed 9 people and wounded 35 others before killing himself during a shooting spree at a shopping center. Investigators said that they could find no clear motive and no known links to terror organizations.

Archbishop Joseph E. Kurtz of Louisville, Kentucky, president of the U.S. Conference of Catholic Bishops, echoed the pope’s condolences in a statement following the attack in Munich, praying “that the suffering may find comfort” and “the wounded may find healing.”

“Our resolve turns toward an unwavering desire to be witnesses of love alive in the world. Against this resolve the forces of hatred and division cannot prevail. Let us draw strength from the courage of the victims and first responders in Munich so that we may continue down the path of peace, rejecting violence and that which seeks to divide us,” he said.

The following day, two suicide bombers detonated their explosives during a peaceful protest by a group of Shiite Muslims in Kabul, Afghanistan. A third bomber was killed by security forces before he could detonate his bomb.

The Islamic State group claimed responsibility for the attack that claimed the lives of more than 80 people and left more than 240 wounded.

Pope Francis assured his “closeness to the families of the victims and the wounded” in both attacks.

“I invite you to join with me in prayer so that the Lord inspires in everyone resolutions of goodness and fraternity,” the pope said after his Angelus address.

The same day, a suicide bomber killed 21 people and wounded at least 35 others in an attack in a neighborhood of Baghdad. The Islamic State group also claimed responsibility for that attack.

NEXT: Pope asks World Youth Day pilgrims to help him with prayers