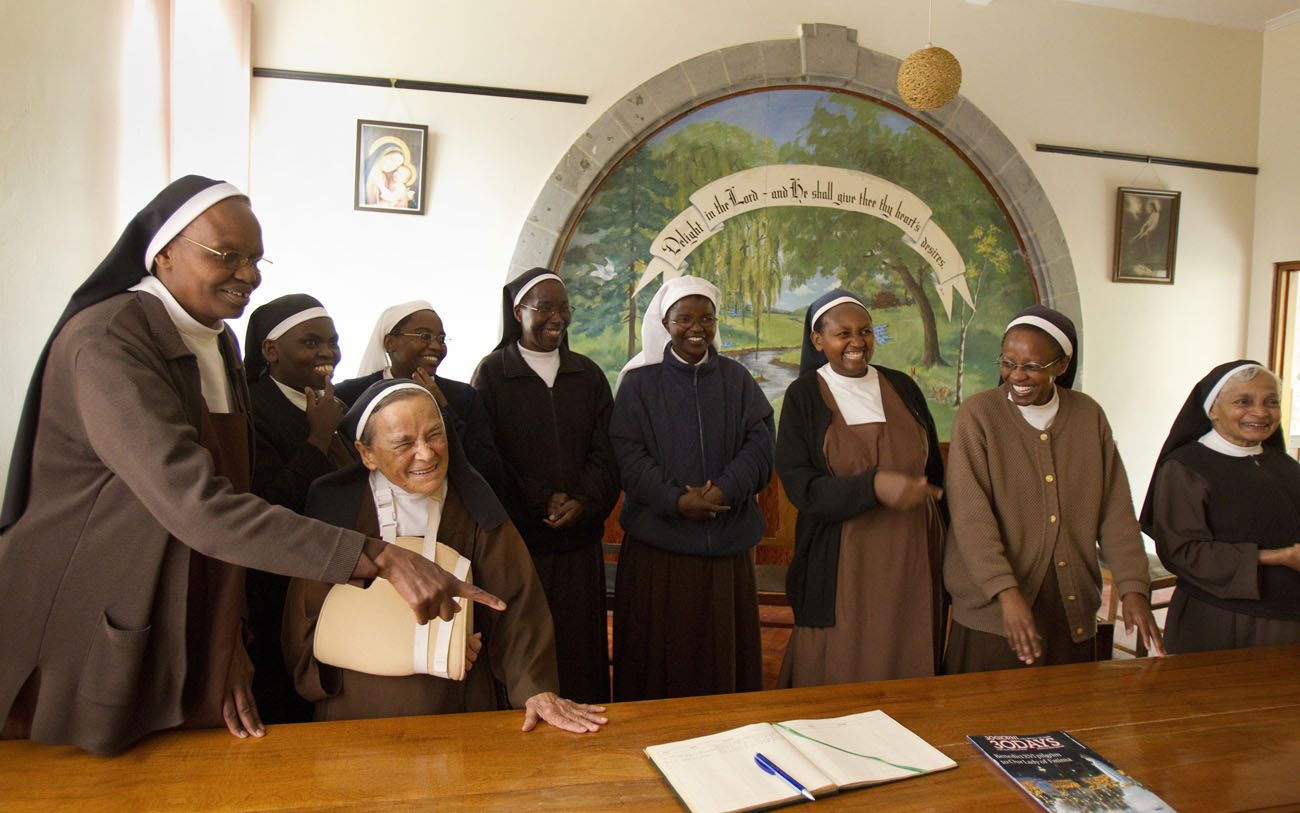 The Carmelite Sisters of Mount Carmel Convent in Nairobi, Kenya, ask their visitors from the United States to sign their guest book in this 2011 file photo. Pope Francis issued a series of new rulings dealing with formation, assets, prayer life, authority and autonomy of contemplative women. (CNS photo/Nancy Wiechec)

VATICAN CITY (CNS) — In an effort to help contemplative women religious renew their life and mission in the church and the world, Pope Francis issued a series of new rulings dealing with formation, assets, prayer life, authority and autonomy.

The new rulings include a mandate that “initially, all monasteries are to be part of a federation” based on “an affinity of spirit and traditions” with the aim of facilitating formation and meeting needs through sharing assets and exchanging members. Monasteries voting for an exception from joining a federation will need Vatican approval.

All institutes of contemplative women religious will need to revise or update their constitutions or rules so as to implement the new norms and have those changes approved by the Holy See.

Titled “Vultum Dei Quaerere” (Seeking the face of God), the document focuses on the life of contemplative women religious. Dated June 29, the feast of Sts. Peter and Paul, it was released by the Vatican July 22, the feast of St. Mary Magdalene.

The 38-page document contains 14 new articles ruling on various aspects of life within monasteries and their jurisdiction, including a regulation outlining the criteria needed for a monastery to retain juridical autonomy or else be absorbed by another entity or face closure.

The Vatican Congregation for Institutes of Consecrated Life and Societies of Apostolic Life is now charged with creating a new instruction to replace what had been the current — but now no longer in effect — “Verbi Sponsa” — the congregation’s 1999 instruction on contemplative life and cloistered nuns.

The bulk of the new document outlines 12 aspects of consecrated life that call for “discernment and renewed norms” in an effort to help contemplative women fulfill their specific vocation and “essential elements of contemplative life,” the pope wrote.

The document also notes today’s pervasive “digital culture” and praises the potential of internet for formation and communication. However, the pope calls for “prudent discernment” in the use of new media so that they don’t lead women to “wasting time or escaping from the demands of fraternal life in community” or become harmful to one’s vocation or an obstacle to contemplative life.

The pope praised contemplative women and expressed the church’s long-held esteem for men and women who chose to follow Christ “more closely” by dedicating their lives to him “with an undivided heart” and in a prophetic way.

Underlining how much the church and humanity need their prayers, self-sacrifice and evangelizing witness, the pope said it was not easy for today’s world to understand their “particular vocation and your hidden mission; and yet it needs them immensely.”

Like beacons of light, contemplative women are “torches to guide men and women along their journey through the dark night of time,” pointing the way to the new dawn and the truth and life of Christ, the pope said. They are “like Mary Magdalene on Easter morning, announce to us: ‘I have seen the Lord!'” and Mary, the Mother of God, who contemplates the mystery of God in order to see the world “with spiritual eyes.”

However, contemplative life can “meet with subtle temptations” — the most dangerous being: listlessness, falling into mere routine, lack of enthusiasm and hope, and “paralyzing lethargy,” he said.

To that end, the pope highlighted 12 aspects of contemplative and monastic life that needed particular attention and renewed norms for women: formation; prayer; the word of God; the sacraments of the Eucharist and reconciliation; fraternal life in community; autonomy; federations; the cloister; work; silence; media; and asceticism.

The document includes clearer regulations saying that maintaining juridical autonomy will entail having “a certain, even minimal, number of sisters, provided that the majority are not elderly, the vitality needed to practice and spread the charism, a real capacity to provide for formation and governance, dignity and quality of liturgical, fraternal and spiritual life, sign value and participation in life of the local church, self-sufficiency and a suitably appointed monastery building.”

If a monastery falls short of the criteria, then the Congregation for Institutes of Consecrated Life and Societies of Apostolic Life “will study the possibility of establishing an ad hoc commission made up of the ordinary, the president of the federation, a representative of the federation and the abbess or prioress of the monastery.” The commission’s aim will be to find ways to revitalize the monastery “or to effect its closure.”

Pope Francis repeats warnings he has made before in speeches to consecrated men and women, against “the recruitment of candidates from other countries solely for the sake of ensuring the survival of a monastery.”

Archbishop Rodriguez explained the church is “not closing its doors” to its universal makeup, but that more thorough and careful discernment must be made by superiors and candidates in reflecting upon their reasons for entering monastic life.

The document, the archbishop said, also clearly states that nuns charged with formation can receive continued formation for themselves even outside the monastery, in a way that is consistent with their charism. The importance of their own formation cannot be sacrificed, he said, just because they have been called to live a cloistered life.

The other major change, the archbishop said is contained in article 10, in which each monastery is to ask the Holy See “what form of cloister it wishes to embrace, whenever a different form of cloister from the present one is called for.”

“Once one of the possible forms of cloister is chosen and approved, each monastery will take care to comply with, and live in accordance with, its demands,” the document said.

Other mandatory norms each monastery will have to adhere to: verify the centrality and place of prayer in daily life; provide for “lectio divina” and eucharistic adoration; find ways to involve the local church more; and provide “suitable moments of silence.”

The archbishop said no document on the life of contemplative men’s orders was in the works or being considered.

He said work on the constitution began two-and-a-half years ago when the congregation sent out a questionnaire to every monastery, about 4,000 around the world. The responses were compiled and considered in the drafting process of the new constitution, he said, and contemplative women were “greatly listened to.”

Like the number of religious men and women, the number of contemplative women religious has declined the past decade going from more than 48,000 women in 2000 to less than 39,000 in 2014, he said.

Europe remains the continent with the highest numbers of contemplative women — more than 23,000, followed by the Americas with more than 8,000.

NEXT: After rounds of terror attacks, ‘our prayer should be more insistent,’ pope says