Hungry Venezuelans turn to church, which doesn’t have enough to help all 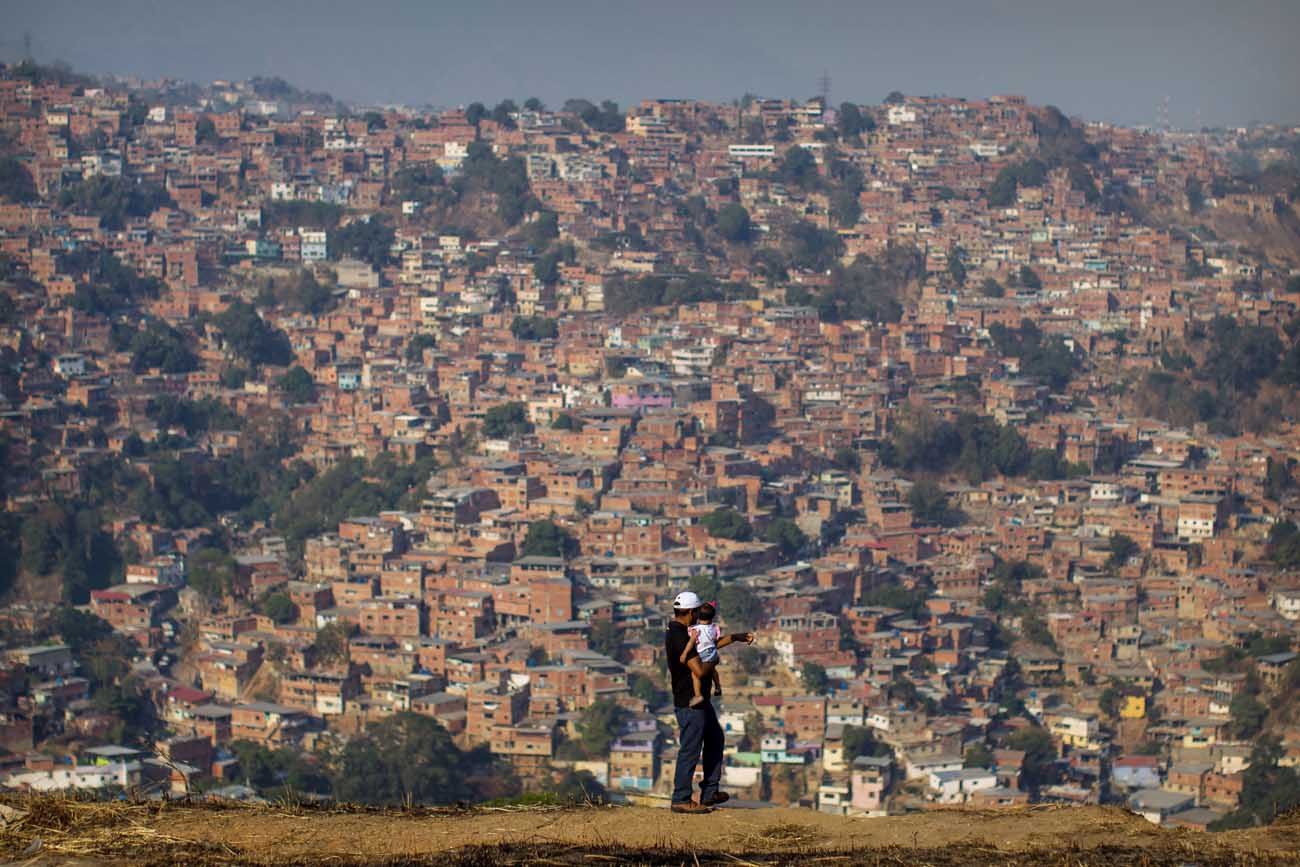 A man and his daughter overlook a neighborhood in Caracas, Venezuela, March 25. Venezuela's deepening economic crisis has prompted Catholics to turn to the church, which does not have enough donations to help everyone. (CNS photo/Miguel Gutierrez, EPA)

SANTO DOMINGO, Dominican Republic (CNS) — Even on the days he lines up hours before the store opens in his neighborhood in Caracas, Venezuela, Ernesto Salazar is not assured he’ll be able to buy basic food items, like flour and rice.

Under a government system, he can shop Thursdays for the goods, but some days the store shelves are empty by the time he gets inside. He can turn to the black market, where the costs are exponentially higher.

“Or, we just don’t eat certain foods, or we eat less,” he told Catholic News Service.

“We have gotten to the point where looking to buy food can be a job by itself,” said the 33-year-old auto mechanic, a father of two. “Something needs to change.”

Long lines for food, shortages of medications, runaway inflation and political unrest have gripped Venezuela for more than a year, pushing the South American country of 31 million people to the edge of collapse.

Maria Elena Febres-Cordero, president of Venezuela’s National Council of the Laity, said she believes the deepening economic morass has brought Venezuelans closer to the church and prompted them to look to their parishes and bishops for guidance. Yet the crisis has not spared the church, even as the public relies more on the services it provides.

In Lara, a state in central-western Venezuela, Father Humberto Tirado said he has cut down the days Caritas provides food and medicine, from once weekly to once monthly, because of a lack of donations.

“With the government restrictions, it’s become harder to get large donations through the national Caritas office, so we’re relying on individuals,” he said in a phone interview with Catholic News Service from St. Rose of Lima Parish. “And I have not received any donations of food in two months.”

Meanwhile, residents are coming to the parish daily to ask for basics.

“Unfortunately, we’ve had to prioritize the people who have absolutely nothing,” he said. “We don’t have enough to respond to everyone who needs help.”

Ramon Antonio Perez, a journalist who works in the Archdiocese of Caracas and edits the blog El Guardian Catolico, said in the past year he has witnessed the human suffering caused by the shortages.

“In lines (waiting to buy food) I have seen women and men pass out because they’ve gone days without eating. It’s terrible to see and hear the cries of children begging for food,” he said. “It’s not easy. But the mercy of God can work miracles.”

Febres-Cordero said the country, which sits atop one of the largest oil reserves in the world, is nearly unrecognizable from the one she grew up in.

“The Venezuela I grew up in was one where there were opportunities for education, for a career, for a future,” she said. “That needs to be rebuilt.”

International mediators plan to lead talks in coming weeks to find a solution to a political standoff between President Nicolas Maduro’s government and the political opposition, which holds the majority in parliament. On July 21, Ernesto Samper, secretary-general of the Union of South American Nations, said both sides support the Vatican having a role in those discussions.

But Catholic leaders in the country expressed doubt that the current government can find a way out. The government “has shown an inability to solve the country’s urgent problems,” Archbishop Diego Padron Sanchez of Cumana, president of the Venezuelan bishops’ conference, said when Catholic leaders met in Caracas in early July.

“A government that has failed to win the economic war and fails to provide food and medicine to the people, and what’s more, has refused to allow religious or social institutions lend their support to alleviate hardships and diseases, lacks the moral authority to call for dialogue and peace,” Archbishop Padron said.

Maduro’s government has been buffeted by a currency crisis and downturn in the price of oil, its principal export. The International Monetary Fund said July 20 that the Venezuelan economy will likely contract 10 percent this year while consumer prices would increase more than 700 percent.

Maduro has responded to the crisis by extending a state of emergency and increasing the role of the military by promoting Defense Minister Vladimir Padrino Lopez to a newly created position atop the government. Maduro now faces a potential recall vote; opposition lawmakers said July 19 that they had received enough signatures to proceed with the next step in calling for a popular referendum.

NEXT: Challenges change in AIDS fight, but churches asked to continue help