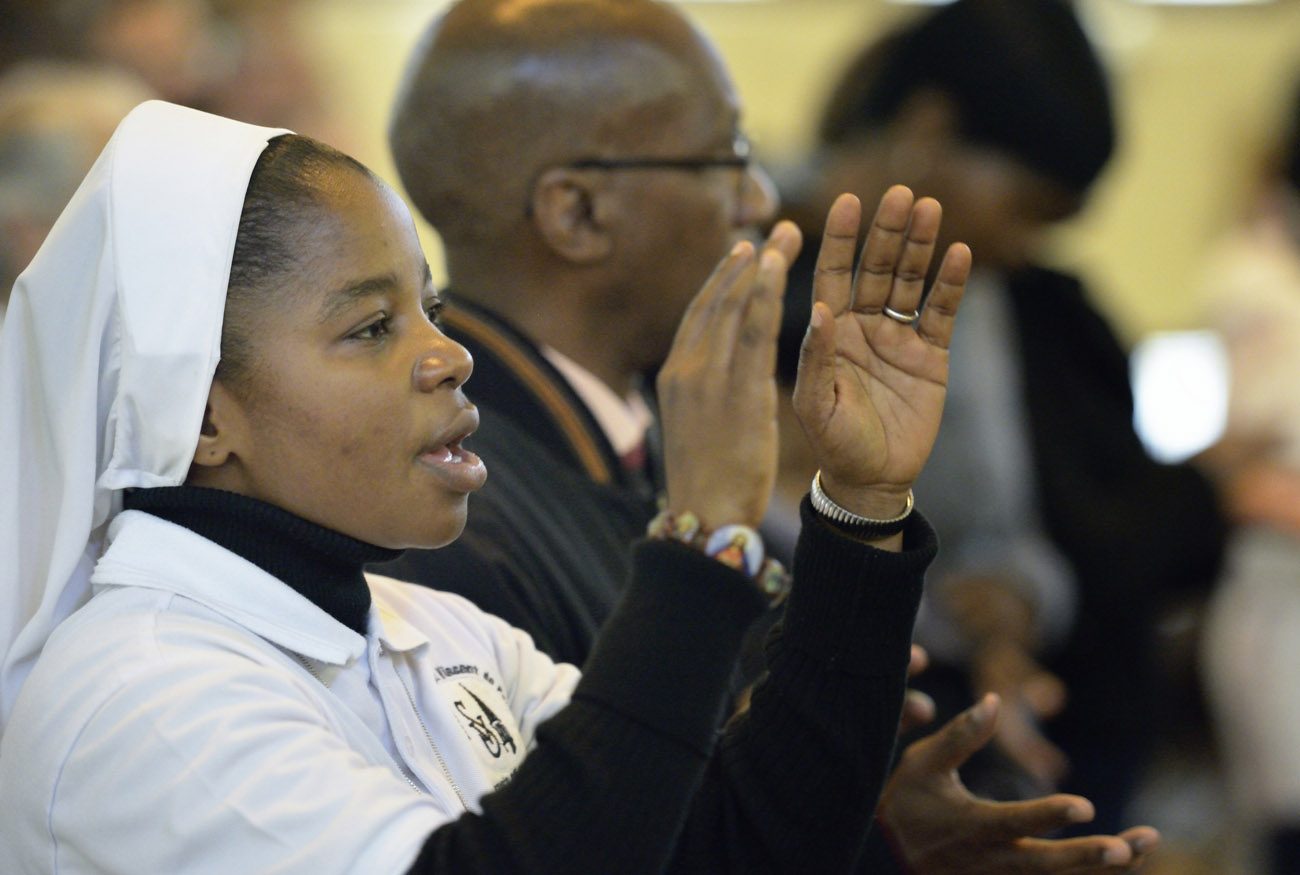 Sister Germaine Muaka of the Sisters of St. Vincent de Paul Servants of the Poor sings during a July 17 session of a Catholic conference on HIV and AIDS in Durban, South Africa. (CNS photo/Paul Jeffrey)

DURBAN, South Africa (CNS) — As the world moves into the fourth decade of the fight against AIDS, new challenges confront those struggling against the epidemic, and faith communities must continue to assure that those affected by the virus have both treatment and hope, a top U.N. official told religious leaders attending the International AIDS Conference here.

“The death toll from AIDS is going down everywhere. While 1.1 million will die this year, five years ago it was more than 2 million. This improvement is the result of access to treatment. This is science working for people,” Dr. Luiz Loures, deputy executive director of the Joint United Nations Programme on HIV/AIDS and assistant secretary-general of the United Nations, told a July 16 gathering of interfaith leaders in Durban for the international conference, which ended July 22.

“But more than ever, we know that science alone won’t solve this. You’ll not find all the solutions in scientific books, but you will in ‘Laudato Si’,’ where Pope Francis has alerted us that we cannot rely on technocracy by itself. Sometimes what looks like a great solution doesn’t capture the complexity of health,” Loures said.

“At the same time, we are saving more lives than ever, the AIDS epidemic is coming back, it is rebounding and re-emerging everywhere. The difference now to what we saw in the past is that the epidemic is much more selective, it’s affecting the ones you faith leaders care most about, the ones left behind, the last and the least in your societies. This is the modern shape of the AIDS epidemic.”

During a week in which hundreds of seminars and speeches focused on vaccine trials and rumors of breakthrough treatments, Loures said the medical and scientific communities need to go beyond traditional approaches to respond to the new challenges.

“It’s not just medicines and what happens in clinical wards and health centers that will solve this crisis. At the end, it’s about how we approach people, about ethics, about what brings us together to work for better societies, societies that our children will be proud to live in,” he said.

“The disease follows the increasing number of armed conflicts around the world. Rape as a tool of war has pushed the epidemic,” he said. “And AIDS is a geographical problem, in that it thrives in places no one wants to go. In South Sudan, for example, less than 10 percent of HIV-positive people have access to treatment.”

Loures, who has worked closely with Vatican officials on crafting a coordinated response to HIV in children, said the churches’ focus on community approaches works “faster and cheaper” than other responses to AIDS, and he praised the closeness of faith communities to affected populations. Loures said the recent Ebola outbreak in Africa proved the churches’ ability to respond quickly.

“Readiness is a new concept. Children who need treatment can’t wait. They’ll die first if we don’t take action. Readiness is related to proximity to people, and during the Ebola crisis the churches’ health workers were on the front lines and paid a high price for taking risks,” he said.

“Don’t be humble. What you have done, the places you have worked, the ones you have lost, you should be proud of all this. Come with us and take the central role you should occupy in our response to AIDS,” Loures said. “We need your experience and your approach to move us forward.”

Dr. Deborah L. Birx, U.S. global AIDS coordinator, spoke to the same group, praising them for their work in expanding treatment of children and slowing the transmission of HIV from mothers to children, but warning them that new adult infections were not slowing in some places.

Despite “tremendous progress in having children born HIV-free,” Birx said she worried about their fate as they grow up.

Of particular concern, she said, were girls, “one-third to half of whom are no longer in school because their families can’t afford it or because they have to work in a household. And we know that for one-third of young girls in sub-Saharan Africa, their first sex is forced or coerced. So a third of our young women that we’ve saved from HIV are being raped in their communities. These are the issues that we have to talk about. We have to challenge the culturally accepted practice that girls are not in high school and that young girls are raped within their communities.”

Birx challenged faith groups in the region to redouble their efforts against gender-based violence, which she said helps to fuel the AIDS epidemic.

“You are the individuals that put your strong arms around the women, the mothers who were dying. You were the essence of palliative care before it became a term. But now we have to care for young women to ensure that they can thrive in the same way as the babies that are under 5 and growing up immunized, protected against malaria and HIV-free.

“When you have done much, much more is asked of you,” she said. “So we have to work with churches, mosques and synagogues to make it clear that young women deserve to remain sexually complete beings who are allowed to grow up without being raped.”

Loures and Birx spoke to a joint conference sponsored by the World Council of Churches and several Catholic groups, including the Southern African Catholic Bishops’ Conference and Caritas Internationalis.

PREVIOUS: Hungry Venezuelans turn to church, which doesn’t have enough to help all

NEXT: Pope expresses shock over violence in French church