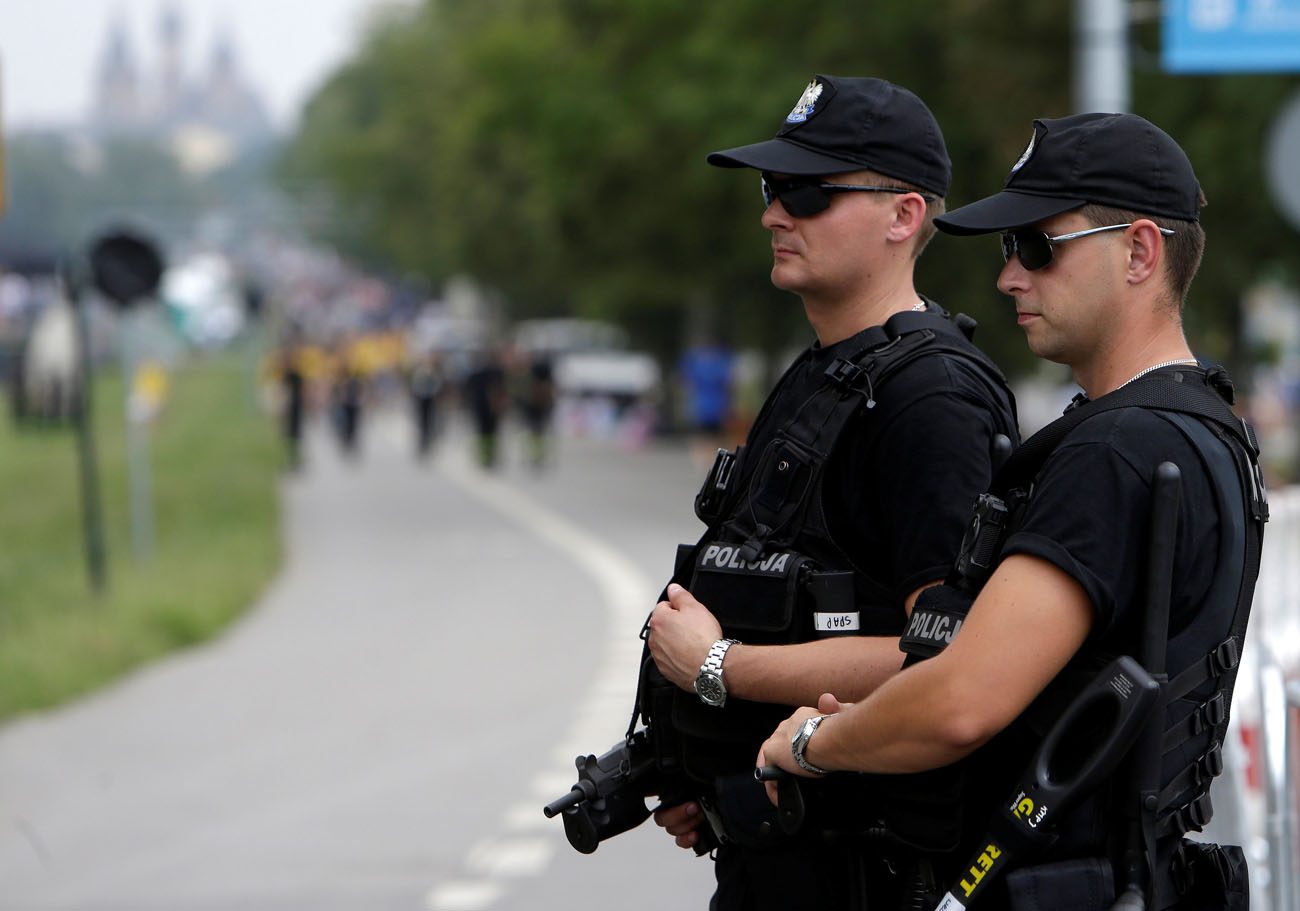 KRAKOW, Poland (CNS) — Polish police have raised the official security threat level at World Youth Day in Krakow, after an Iraqi man was arrested with traces of explosives.

However, a police spokesman said the category of “alpha,” or high, was not linked to any “concrete threat,” adding that security arrangements were “proceeding smoothly” for the expected arrival of 2 million young people in the southern city.

“We’re determined to assure maximum security for all, and our staffers are doing everything they should,” said Mariusz Ciarka, spokesman for Poland’s Warsaw-based police headquarters.

“But we’re also urging everyone to be vigilant and to inform the police or Youth Day volunteers if they see anything suspicious, such as baggage or packs left unattended, and to show understanding if we implement selective controls and movement restrictions. Safety of such a huge gathering of people is what’s most important,” Ciarka said July 26 ahead of the official opening ceremony World Youth Day.

Officials were expecting half a million young people to attend opening ceremonies from 187 countries in Krakow’s Blonia Park.

He said security services had so far noted only “minor incidents,” such as lost documents and small injuries, as well as a July 25 bus crash in which no one was reported injured.

He said police were using mobile X-ray devices and metal detectors, as well as using dogs trained to detect explosives, at railway and bus stations and major road hubs around the city, as well as anywhere crowds gathered.

Gas tankers and large trucks had been barred from Krakow, Ciarka said, after a 19-ton truck was driven into a celebration in Nice, France, July 15.

Security fears are high in Europe in the wake of the Nice outrage and a spate of Islamist-linked attacks in neighboring Germany, as well as the July 26 killing of French Father Jacques Hamel, 84, during an attack during a Mass at Saint-Etienne-du-Rouvray, France. The Islamic State group claimed responsibility for that attack.

Polish police said they had arrested a 48-year-old Iraqi man July 24 in Krakow, after explosive traces were found in his luggage and his clothes, as well as at hotels where he had stayed in Krakow and Lodz.

However, a Krakow prosecutor told journalists there were no grounds for charging the man with terrorism and said not enough explosive material had been detected to cause an explosion.

Ciarka said July 26 that 200 people had so far been barred from entering the country.

The police spokesman said drones and “unauthorized flying objects” had also been banned over a 65-mile zone around Krakow, as well as over the nearby city of Czestochowa, where Pope Francis will celebrate an open-air Mass July 29.

The carrying of arms and dangerous substances had also been outlawed, Ciarka added, as well as any objects normally not permitted aboard planes.

“From today, all movements are being limited around Krakow, as well as at Blonia and the Lagiewniki suburb, where pedestrians will have total priority,” the police official said. “The Polish government has given the police the task of serving society by ensuring this huge event passes off safely, and that’s what we will do.”

PREVIOUS: WYD pilgrims try to grasp the grimness of death at Auschwitz camps

NEXT: Pope urges Poles to value their memories, but be open to change