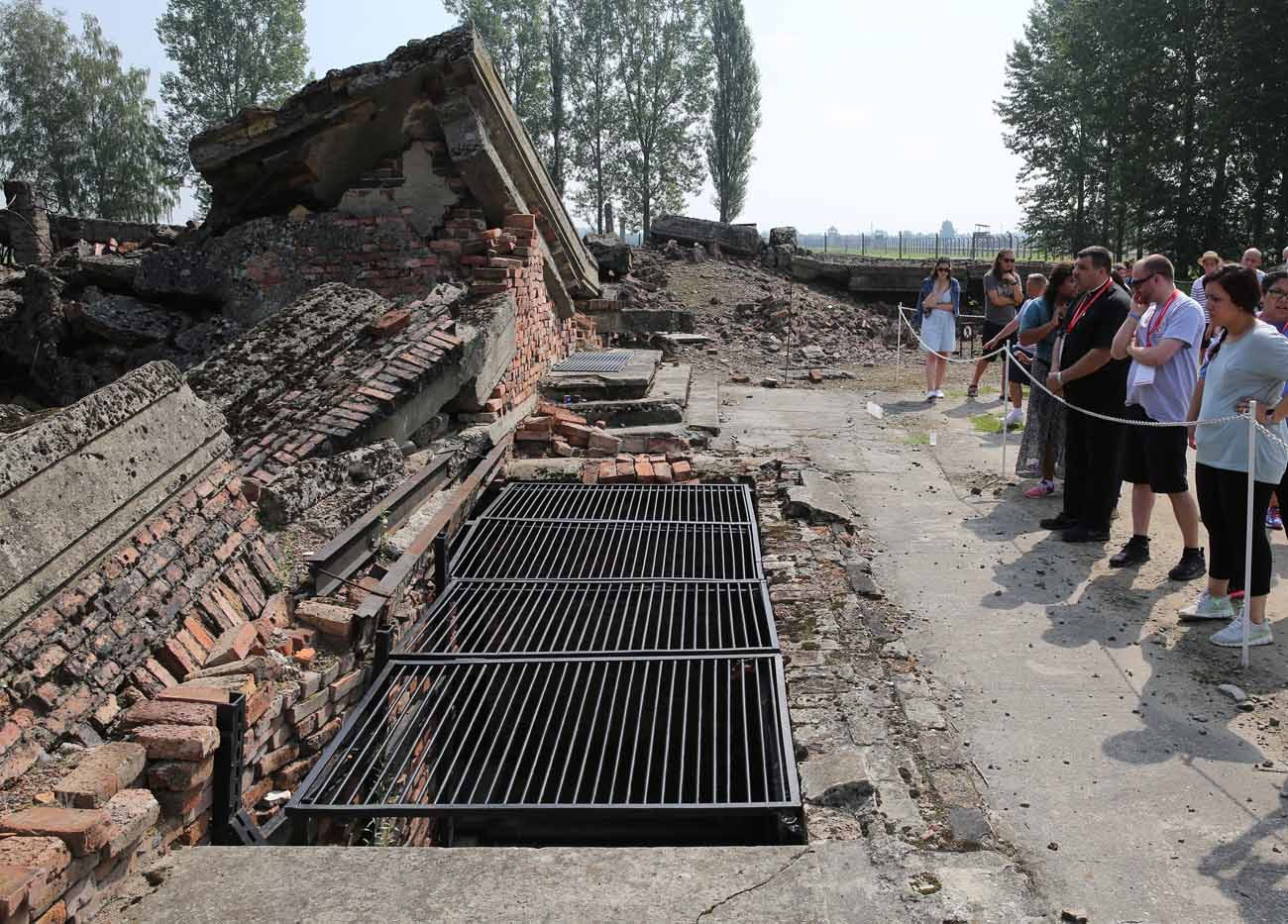 Father Robert Adamo, pastor of St. Ephren Church in Brooklyn, N.Y., prays near the site of gas chambers during a July 25 visit to the Birkenau Nazi concentration camp in Oswiecim, Poland. Father Adamo and other pilgrims from the diocese were in Poland for World Youth Day. (CNS photo/Bob Roller)

OSWIECIM, Poland (CNS) — Walking into the site of the former Nazi concentration camp at Auschwitz, Stephanie Dalton felt a chill up and down her spine.

She called it the spirit of those who died at the hands of the Nazis more than 70 years ago.

“You could tell the people’s presence (was) still there,” she said after her group from the Diocese of Brooklyn, New York, walked through the camp July 25 as part of their World Youth Day pilgrimage.

Dalton, 19, a member of Sts. Simon and Jude Parish, spoke to Catholic News Service during a break after touring the camp and the nearby Auschwitz-Birkenau extermination camp where nearly 1 million people were killed in secret during World War II.

Looking at forested areas at Birkenau, Dalton said she could see the people who were held “in the beauty” after arriving by train in crammed boxcars as their fate was being determined by the Nazis.

“They didn’t know what was going to happen,” she said in a solemn tone.

The Brooklyn contingent totals about 600. Forty of them filled a bus and joined thousands of others from around the world at the camps a day before the official opening of World Youth Day. 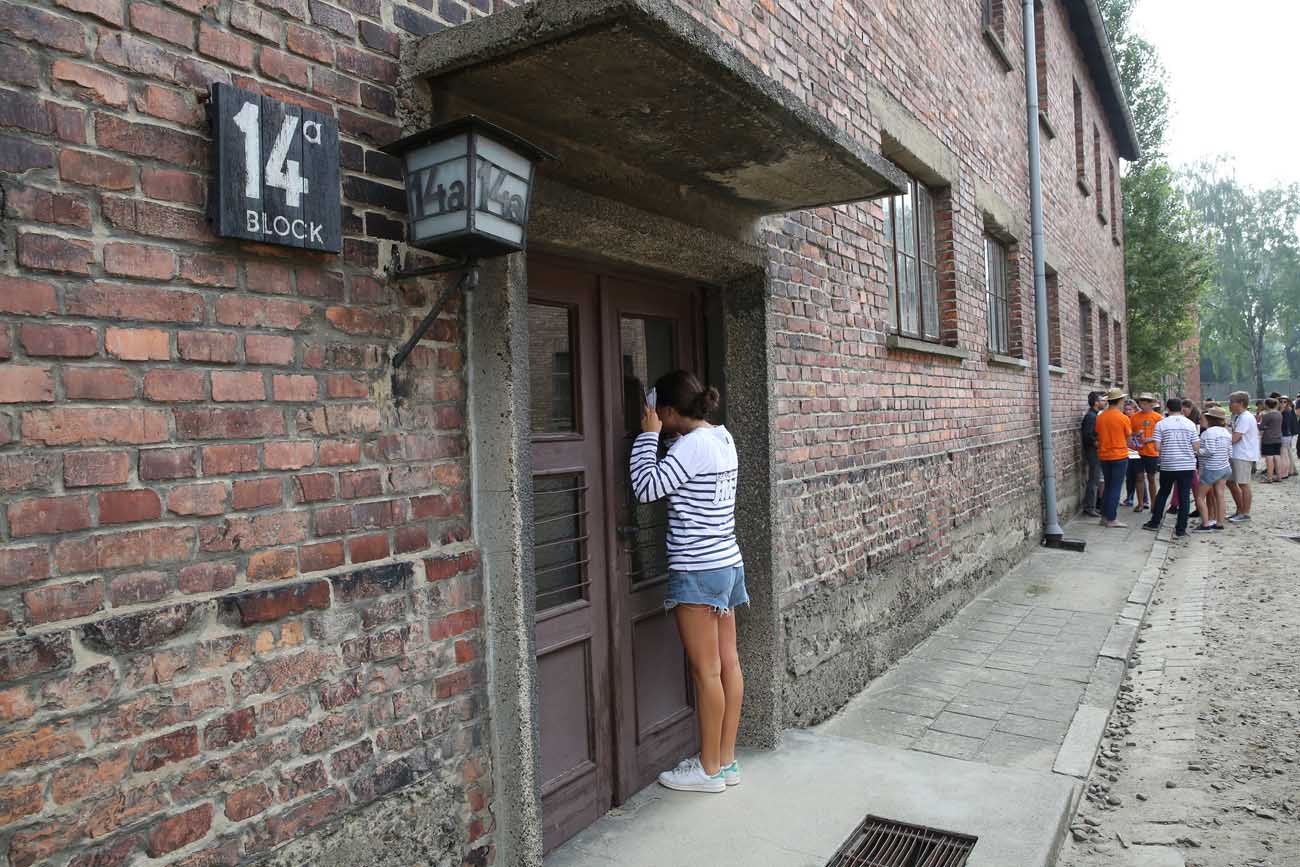 A World Youth Day pilgrim looks inside a building during a July 25 visit to the Auschwitz Nazi concentration camp in Oswiecim, Poland. (CNS photo/Bob Roller)

At Auschwitz, visitors walked in silence under the famous gate with the slogan “Arbeit macht frei” (Work makes you free.) Only the footsteps of the pilgrims on the dry, rocky ground could be heard.

For some of the Brooklynites, the silence echoed what it may have been like for the Jews, Roma and others identified for extermination as they left the trains and walked to their death.

Wadley Fleurime, 18, a native of Haiti and a member of Immaculate Heart of Mary Church, compared the pain of losing friends in his homeland’s 2010 earthquake to how families must have felt when they lost loved ones and friends at Auschwitz.

“It breaks my heart that something like this could happen, because I know what the heartbreak is like,” he said.

Patricia, 22, and Gabriella Ruiz, 19, sisters who belong to Mary Queen of Heaven Church, said after leaving Auschwitz they found it difficult to comprehend the killing that occurred onsite. They expect to share what they saw and learned with parishioners at home.

“It was crazy that we were walking in the same place that they harmed people,” Gabriella Ruiz said. Her sister described her experience as “surreal.” The sisters want to research the Holocaust more deeply so that they can support their experience with additional facts and photos.

“We can say we saw it with our own eyes,” Patricia Ruiz said.

Several contingents from France stopped at various locations at the expansive Birkenau site to pray and sing hymns of atonement for the sins of humanity.

Dominick Costantino, 24, vocation program coordinator for the Diocese of Scranton, Pennsylvania, was walking with a young Polish woman, Monika Hulewicz, discussing the history of the camps.

“It’s very sad that humans could have done this to other humans,” Costantino said. “It’s amazing (that) you’re walking in the suffering. In the silence you hear the stumbling, the falling, the crying of the people.”

Hulewicz, 23, said it is imperative for Poles to tell the story of the carnage at the camps.

“It is very important for us to show that this is not just Polish heritage, but that this is the heritage of the whole world,” she said. “It is a big, big reminder of how we can avoid doing it in the future.”

At the crumbling bricks of a dynamited Birkenau crematorium, Adrianna Garcia, 26, a member of St. Peter Prince of the Apostles Parish in San Antonio, stopped to discuss with a friend what she was seeing. She said that studying the Holocaust in school was far different than seeing the camps where mass executions were carried out.

“You honestly don’t get the full picture until walking the grounds,” she said.

As a fifth-grader in a Catholic school, Garcia had a Jewish teacher who would tell stories about the Holocaust. “Her stories can’t compare to seeing this,” Garcia told CNS. “She would take us to the San Antonio Jewish museum, but you can’t compare it.”

She said the pilgrims who visit the concentration camps must take home the stories home and encourage others to make the same trip if they can. She said she already had been sharing what she saw on social media.

“It’s important not to leave it in the storytelling. Stories come and stories go. But if you live it, you can help others understand it,” she said.

NEXT: Police raise security threat level in Krakow but say no concrete danger