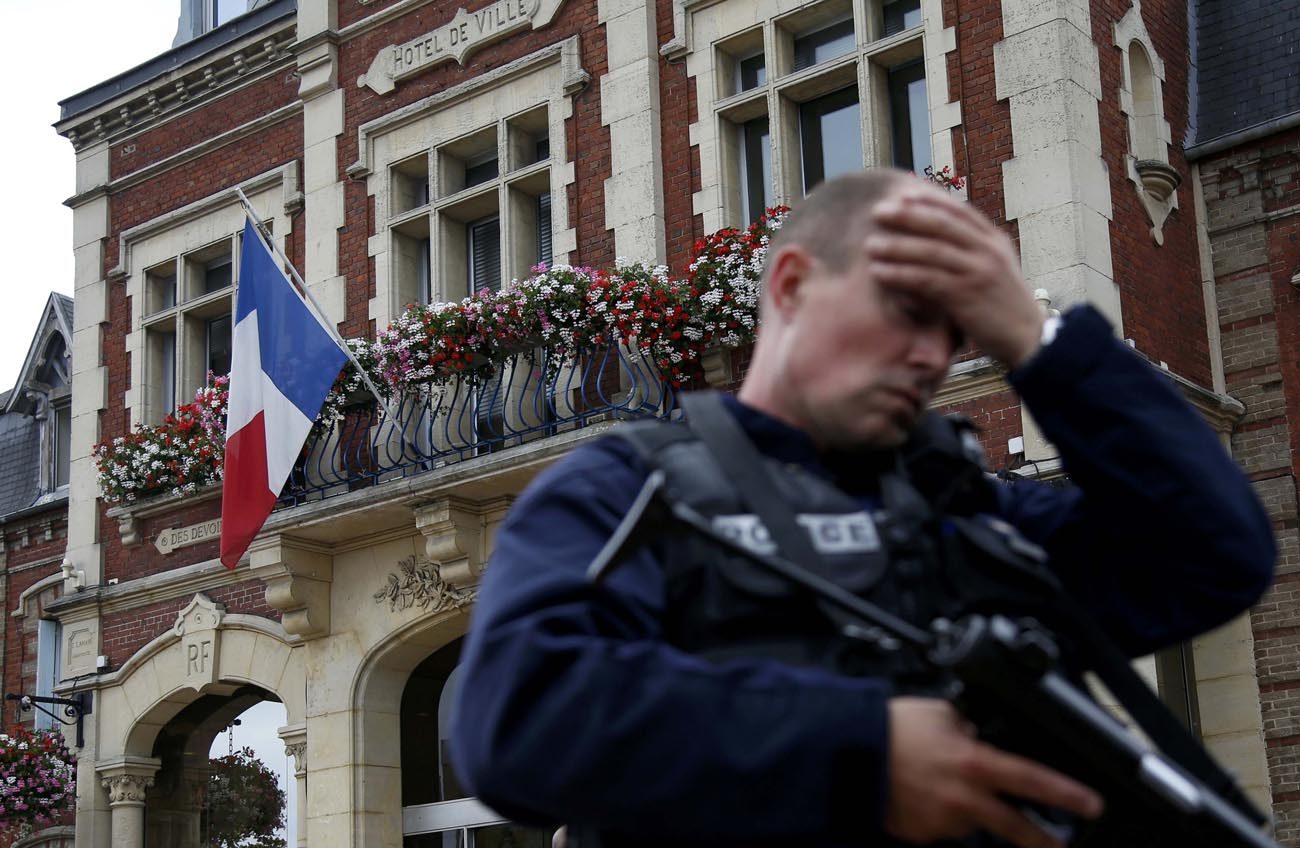 A policeman reacts as he secures a position in front of city hall after two assailants killed 84-year-old Father Jacques Hamel and took five people hostage during a weekday morning Mass at the church in Saint-Etienne-du-Rouvray, France, near Rouen July 26. (CNS photo/Pascal Rossignol/Reuters)

UPDATED — VATICAN CITY (CNS) — The murder of a priest in northern France, taken hostage with a handful of other faithful during a weekday morning Mass July 26, is another act of “absurd violence” added to too many stories of senseless violence and death, said the Vatican spokesman.

Pope Francis was informed about the hostage situation at the church in Saint-Etienne-du-Rouvray near Rouen and the murder of 84-year-old Father Jacques Hamel, said Jesuit Father Federico Lombardi, Vatican spokesman.

“With pain and horror” for the “absurd violence,” Pope Francis expressed his condemnation of “every form of hatred” and offered his prayers for all those involved.

“We are particularly stricken because this horrible violence occurred in a church — a sacred place in which the love of God is proclaimed — with the barbaric killing of a priest,” Father Lombardi said.

Police said two men, armed with knives, entered the church during Mass. They reportedly slit the throat of Father Hamel. They said another person present at the Mass was in serious condition at the hospital. An Interior Ministry spokesman said the attackers were killed by police, ending the hostage situation.

A nun who witnessed the attack described the scene to French radio station RMC.

“In the church, everyone screamed ‘Stop, you don’t know what you’re doing.’ They didn’t stop. They forced him to his knees; he tried to defend himself, and it was then that the drama began,” said the nun, who identified herself as Sister Danielle.

“They recorded themselves (on video). They did a little — like a sermon — around the altar in Arabic. It was a horror.”

The sister managed to escape the church and flag down a car for help, RMC reported.

She told the station about her respect for her colleague.

“It’s necessary to remember that this was an extraordinary priest,” Sister Danielle told RMC. “That’s all I want to say. He’s great, Father Jacques.”

The Islamic State group claimed responsibility for the attack via its news site, though the group’s involvement has not been confirmed by French police. French President Francois Hollande suggested the group was behind the attack.

Hollande called Pope Francis to express “the grief of the French people after the odious assassination of Father Jacques Hamel by two terrorists,” said a statement from the president’s office.

Archbishop Dominique Lebrun of Rouen, who was in Krakow, Poland, with World Youth Day pilgrims when the attacked occurred, said he would return to his archdiocese.

“The Catholic Church can take up no weapons other than those of prayer and brotherhood among people of goodwill,” the archbishop said in a statement from Krakow. He said that while he would leave Poland, hundreds of young people from his diocese would remain. “I ask them not to give in to violence,” but instead “become apostles of the civilization of love.”

Msgr. Olivier Ribadeau Dumas, secretary-general of the French bishops’ conference, also was in Krakow for World Youth Day. He told media: “We know now they were both terrorists.”

“We believe that evil and violence will not have the upper hand, and all the French bishops share this opinion,” he said.

Cardinal Pietro Parolin, Vatican secretary of state, sent a message of condolence to Archbishop Lebrun. The cardinal said Pope Francis was “particularly upset that this act of violence took place in a church during Mass, the liturgical act that implores God’s peace for the world.”

In the latest event of violence, the cardinal said, the pope prayed God would “inspire in all thoughts of reconciliation and brotherhood.”

Chaldean Archbishop Bashar Warda of Irbil, Iraq, was another church leader in Krakow for World Youth Day. He told Catholic News Service the attack in France reminded him of the 2010 massacred in Baghdad’s Church of Our Lady of Deliverance “when they held the people inside the church” during Sunday evening Mass “and killed two priests and then started killing the rest.” A total of 48 people were killed and more than 100 were injured.

“This is the sort of world we are living in,” Archbishop Warda said. “We pray for the priest and everyone who was shocked and horrified.”

At the same time, “we pray for all of ISIS so they could really wake up and know the God of mercy,” he said. “We know that it is going to be harder and harder because the more you push them, they come up with more terrifying stories and events.”

“It’s shocking, it’s sad, really sad” to know they could “enter a church, a place of prayer” and commit such violence, the archbishop said. “Imagine you enter a mosque and start killing people — but that’s ISIS. That’s the way they act. Unfortunately this is the way they’ve been trained.”

Archbishop Joseph E. Kurtz of Louisville, Kentucky, president of the U.S. Conference of Catholic Bishops, expressed gratitude for “the unforgettable witness of the faithful” in the church attack.

“Jesus calls us to be sisters and brothers, to strive to care for one another, and always to reject the evil that seeks to divide us,” the archbishop wrote in a July 26 statement.

Contributing to this story was Colleen Dulle in Washington and Robert Duncan in Krakow.