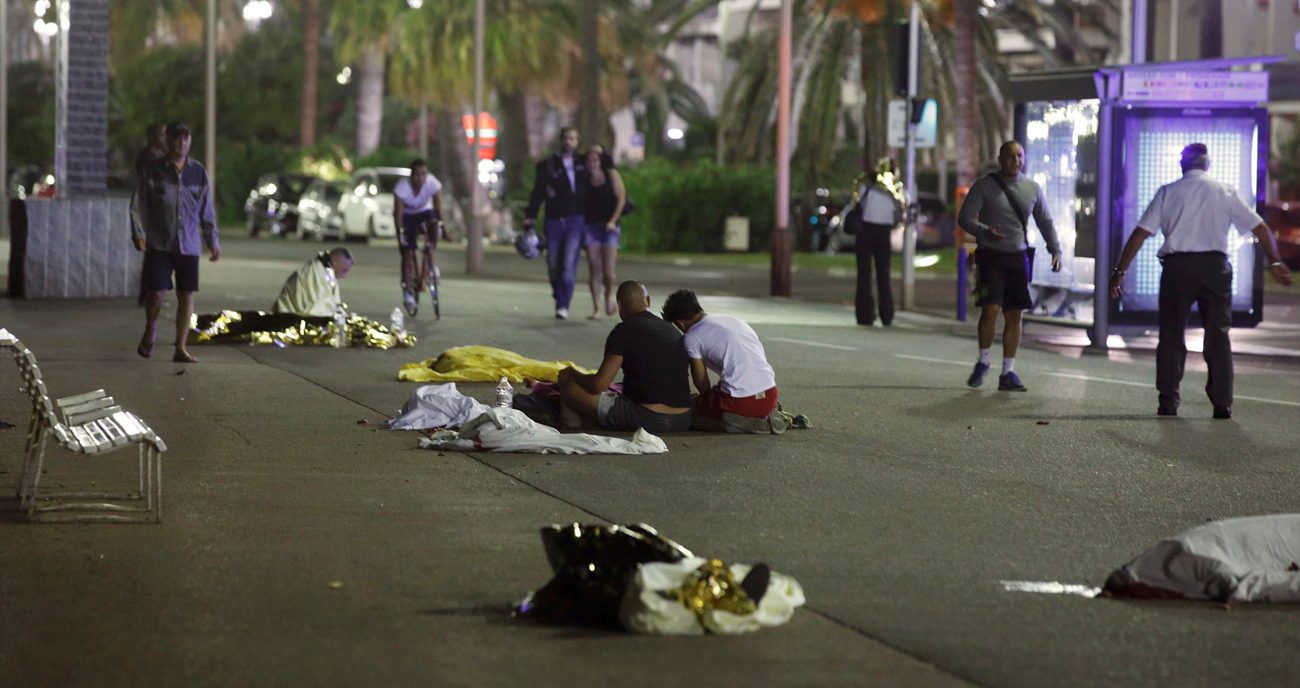 Bodies are seen on the ground July 15 after at least 84 people were killed in Nice, France, when a heavy truck ran into a crowd celebrating the Bastille Day national holiday July 14. (CNS photo/Eric Gaillard, Reuters)

The attack by a lone driver of a truck that ran down visitors along Nice’s seaside promenade Thursday night, July 14, left at least 84 people killed.

The pope expressed his “profound sadness” and “spiritual closeness” with the French people in a message to Bishop Andre Marceau of Nice, signed by Cardinal Pietro Parolin, Vatican secretary of state.

The message said Pope Francis “entrusts to the mercy of God those who have lost their lives” and he shares “the pain of the bereaved families.”

“The pope expresses his sympathy to those injured and to all those who have contributed to rescue efforts, asking the Lord to sustain each one in this trial,” the cardinal wrote. He said Pope Francis imparted his blessing on grieving families while invoking “God’s gift of peace and harmony” upon the people of France.

France declared three days of mourning beginning July 16 and extended its state of emergency after the Thursday night attack.

In Philadelphia, Archbishop Chaput wrote in a Facebook post that the attack in Nice was “another stark example of the turmoil and violence taking place throughout the world. These acts of terror are senseless and fill all of us with grief and fear. However, we must take comfort in God’s enduring love and mercy for each of us. He is a bright beacon of hope in the face of evil.

“Please join me in praying for the innocent lives lost in France and for the families and loved ones of those who perished as they struggle to shoulder a heavy burden of grief and loss,” Archbishop Chaput wrote. “We continue to pray for peace in the world and for God’s justice and mercy to endure always.”

“(The attack) was one of those insane acts that can arise in the hearts of men — and in this case, one man. How can it be reasonably possible that man can be the author of such carnage?” he asked.

The bishop said he hoped compassion and closeness would overcome the “scandal of evil” that might “rightly arouse hate, misunderstanding and closed-mindedness.”

“We must find a way to avoid this at all cost,” he told Vatican Radio. “The message I bring is that which, above all, calls people to be close to one another, to speak, to meet with each other.”

In a statement posted on the French bishops’ website, he said: “We can’t understand such an inhuman act. Nothing can legitimize deadly craziness, barbarism.”

He urged people not to keep their emotions bottled up. “Let’ not hesitate to tell each other what hurts our hearts; this is what being human is.”

“Don’t be afraid to go meet priests, people that can help you. Don’t keep for yourself what might become violence, hate maybe. This man cannot succeed in arousing what was in his own heart,” he said.

Adding that churches in Nice will be open for continuous prayer, Bishop Marceau said that in times of distress, the key word guiding the Catholic Church’s mission is “closeness.” The church is called “to be close and to also have the courage to take (people) by the hand, because words often can’t be understood. It is difficult, but we are there.”

“Christians, Catholics, let us bring around us this message of love. Our brothers need it. We need it. Our society needs it,” he said. “Let us bring a message that tells the strength of the heart of man. Death will not have the last word.”

Msgr. Olivier Dumas Ribadeau, secretary general of the French bishops’ conference, called for solidarity and prayer in a post on Twitter early July 15. French bishops reacted to the tragedy on social media and in statements, calling on people to pray for the victims and their families.

Churches around France set up special Masses. In Paris, Notre Dame Cathedral scheduled a Mass July 17 to commemorate the victims.

The French bishops’ conference said it “fully shares the grief of relatives and families of the victims.”

“This tragedy is added to the sad list of terrorist acts that have marred our country and other countries in the world for many months,” the bishops said. “Whatever the reason, this barbarism is unacceptable, intolerable. … More than ever, national solidarity must be stronger than terrorism. In pain of the day, we need to keep the certainty that unity is greater than division.”

Appalled by the dramatic news of the attack in Nice, the Belgian bishops said they shared the emotions of their southern neighbors and assured them of their unity in prayer.

“May real encounters consolidate the bonds of fraternity and respect between all citizens,” they said.

Contributing to this story was Philippe Vaillancourt, editor of Presence info in Montreal.