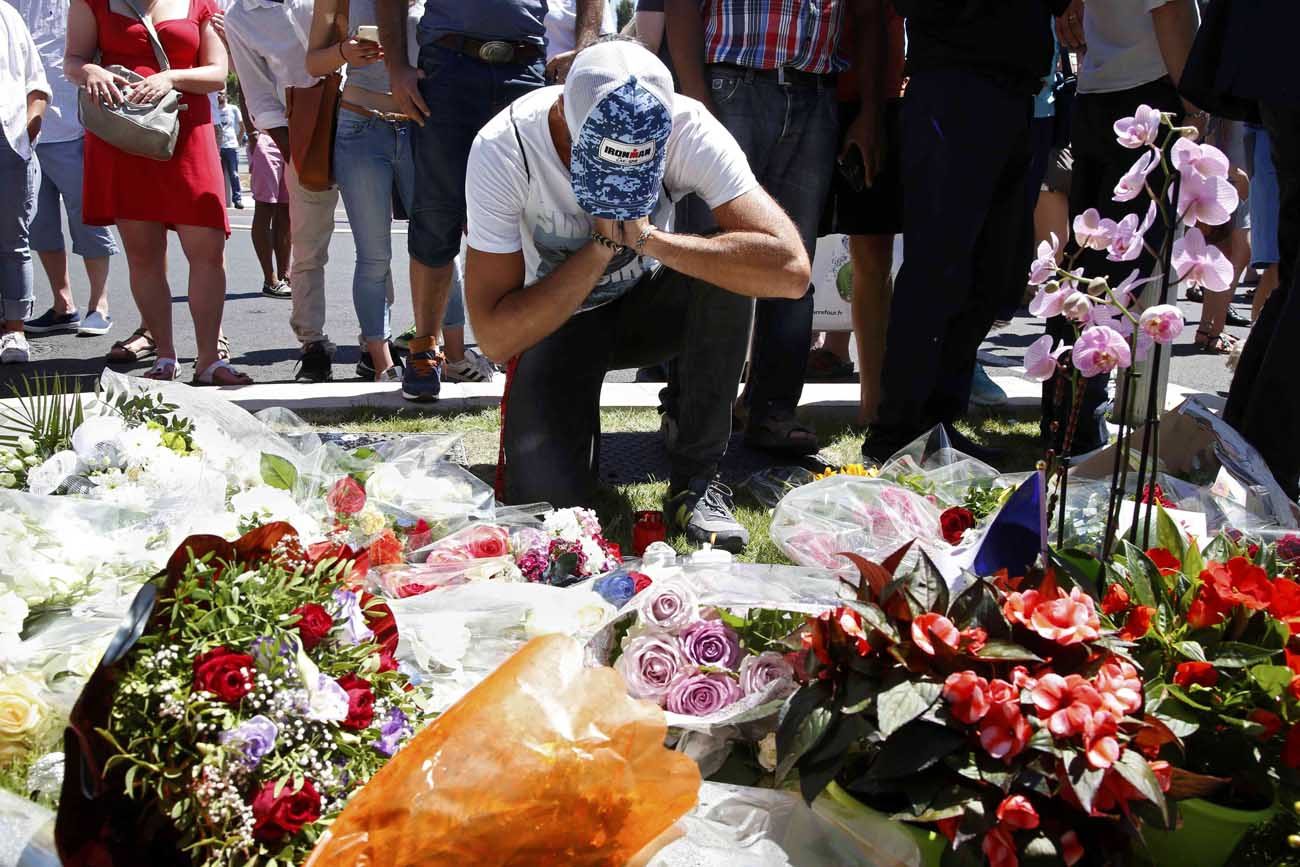 A man prays in front of a makeshift memorial July 15 in Nice, France, as people pay tribute near the scene where a truck ran into a crowd killing more than 80 people the previous evening. (CNS photo/Pascal Rossignol, Reuters)

VATICAN CITY (CNS) — Remembering the victims of the tragic terrorist attack in Nice, France, Pope Francis prayed that God may give comfort to grieving families and foil the plans of those who wish to harm others.

“May God, the good father, receive all the victims in his peace, support the wounded and comfort the families; may he dispel every plan of terror and death so that no man dares to spill his brother’s blood ever again,” the pope said July 17 after reciting the Angelus prayer with visitors gathered in St. Peter’s Square.

In a message following the attack signed by Cardinal Pietro Parolin, Vatican secretary of state, the pope condemned the Bastille Day attack as an “act of blind violence” and expressed his “deep sorrow” and “spiritual closeness” with the French people.

Before leading a moment of silent prayer at his Angelus address, the pope said the pain in the aftermath of the massacre in Nice, “in which so many innocent lives, even many children were mowed down, is still alive.”

“I give a paternal and fraternal embrace to all the residents of Nice and to the whole French nation. And now, all together, let us pray thinking about this massacre, the victims, and the families,” he said.

In his remarks before reciting the Angelus prayer, Pope Francis reflected on the day’s Gospel reading in which Jesus visits the house of Martha and Mary.

The pope noted that the sisters welcomed Jesus in different ways: Mary sat at the feet of Jesus listening to his word while Martha busied herself “preparing things” and forgetting “the presence of her guest.”

“If you welcome a guest in your house and continue doing things, you will have him sit there — both of you silent — as if he were a rock; a guest made of rock,” he said.

Instead, Christians are called to be like Mary and listen to Jesus whose word “enlightens and sustains all that we are and all that we do.”

Reminding the faithful that hospitality is a work of mercy, Pope Francis warned that it is also a virtue that “runs the risk of being left aside,” often due to the hustle and bustle of daily life in which people “don’t have time to listen.”

“I ask you to learn to listen and to dedicate more time to this. The root of peace lies in our capacity to listen,” the pope said.

NEXT: Puerto Rico priest sentenced to prison for felony in sexual abuse case