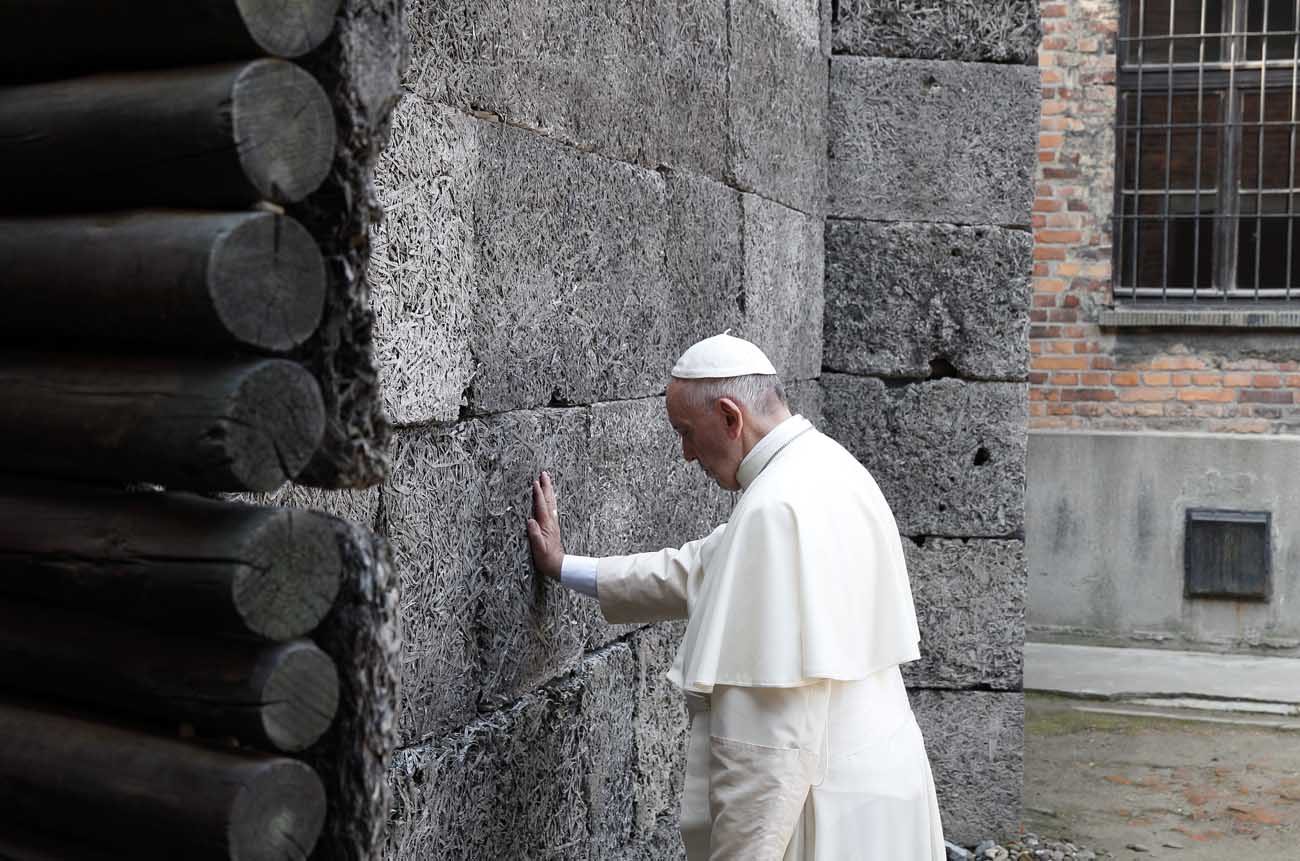 OSWIECIM, Poland (CNS) — Sitting with head bowed and eyes closed, Pope Francis paid silent tribute to the victims of one of the worst atrocities of the 20th century.

The pope arrived July 29 at the Auschwitz-Birkenau Nazi death camp in Oswiecim, an area now blanketed by green fields and empty barracks lined by barbed wire fences, remnants of a horror that remains embedded in history.

Used by the Nazis from 1940 to 1945, the camp was the Nazi’s largest and consisted of three parts: Auschwitz I, where many were imprisoned and murdered; the Birkenau extermination camp — also known as Auschwitz II — and Auschwitz III (Auschwitz-Monowitz), an area of auxiliary camps that included several factories.

In 1942, Auschwitz became the site of the mass extermination of over 1 million Jews, 23,000 Roma, 15,000 Soviet prisoners of war and thousands of Polish citizens of different nationalities.

Among those killed were St. Maximilian Kolbe, a Polish Conventual Franciscan friar, and Edith Stein, a Jewish philosopher who converted to Catholicism and became a Carmelite nun, St. Teresa Benedicta of the Cross.

Crossing the gate inscribed with the infamous motto “Arbeit macht frei” (“Work sets you free”) the pope quietly sat on a small bench for 10 minutes with his head bowed, occasionally glancing somberly around before closing his eyes in silent prayer.

He stood up, and slowly walked up to the wooden post of one of the barracks, reverently touching and kissing it. 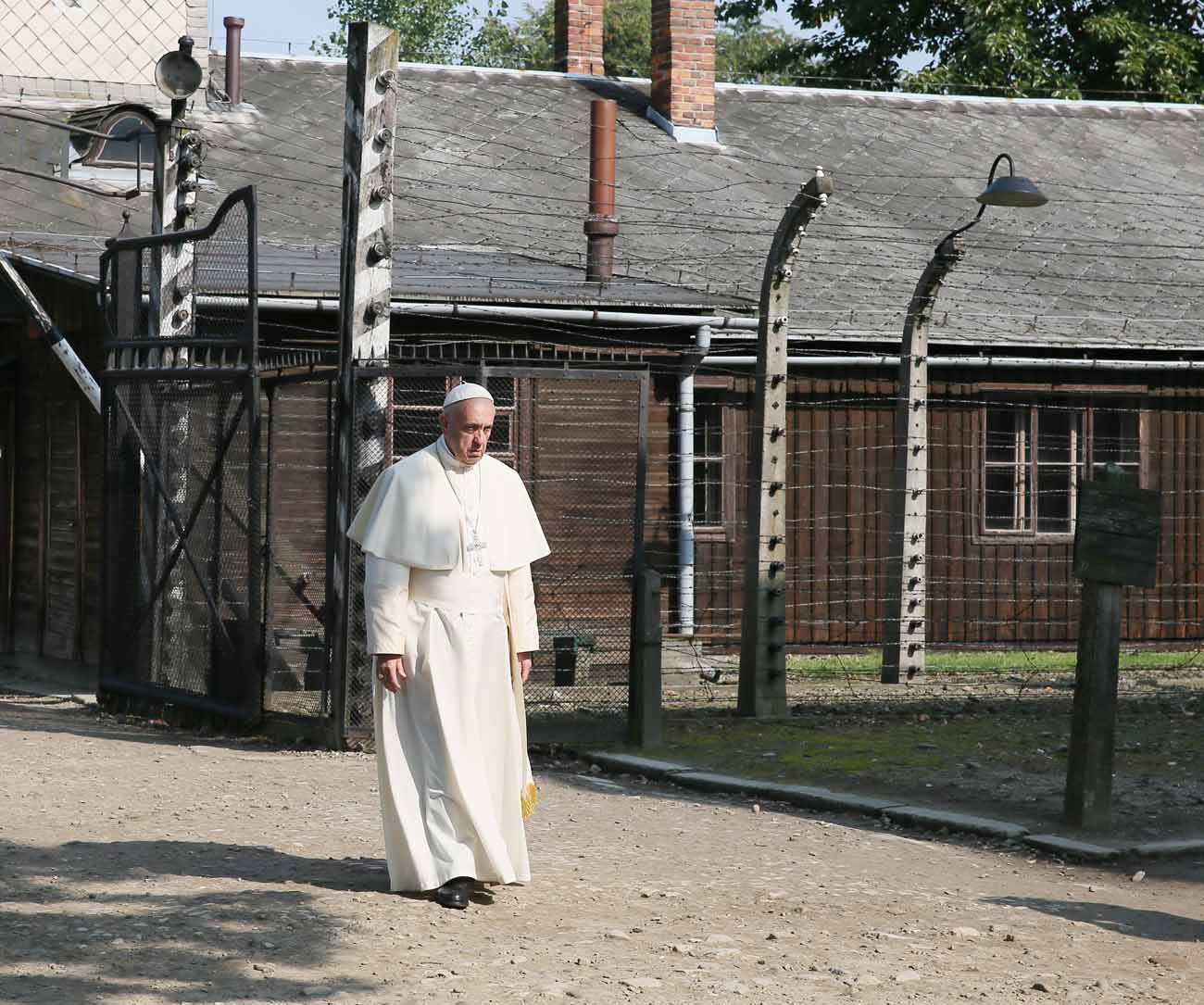 The pope then made his way to Block 11 to greet a dozen survivors of the camp, including a 101-year-old violinist, who survived by being in the camp orchestra. Pope Francis greeted each survivor individually, gently grabbing their hands and kissing their cheeks.

Among the survivors was Naftali Furst of Bratislava, Slovakia, who was deported to Auschwitz and was evacuated to Buchenwald in January 1945 before his liberation.

Furst, who now lives in Israel, gave the pope a photograph showing him and other inmates imprisoned in the Auschwitz barracks.

Pope Francis also signed a book for Furst before he made his way toward the “death wall” where thousands of prisoners were lined up and shot in the back of the head before their bodies were sent to the crematoriums.

Candle in hand, the pope lit an oil lamp in front of the wall, before praying and laying his hand on the wall. He then turned around and entered the barracks of Block 11.

Also known as “the death block” because the Nazis used it to inflict torture, it houses the cell where St. Maximilian Kolbe spent his final hours, starved and dehydrated before being given a lethal injection of carbolic acid.

Pope Francis entered the darkened cell, illuminated by a faint light from the corridor, revealing a candle, an engraved plaque marking the site of the Franciscan friar’s death, and countless words — even a cross — etched on the walls by those who spent their final moments in the starvation cell.

Once again Pope Francis sat in silence with his head bowed. Alone in the cell for eight minutes, he occasionally looked up to contemplate his surroundings.

Outside the cell, he signed the visitors’ book, writing a simple message: “Lord, have mercy on your people. Lord, forgive so much cruelty.”

Pope Francis then made his way to the Holocaust memorial at Auschwitz II-Birkenau, driven in an electric cart on a path parallel to the railroad tracks that carried countless men, women and children to their doom. It now leads to a monument that honors their memory.

To the left of the memorial lay the ruins of one of four crematoriums used to incinerate the bodies of those who died of disease or starvation or who were executed in the two gas chambers housed within the extermination camp.

The pope approached the memorial to the victims, lined with 23 plaques, each inscribed with a message in a different language: “Forever let this place be a cry of despair and a warning to humanity, where the Nazis murdered about one and a half million men, women and children, mainly Jews from various countries of Europe.”

Passing each plaque, Pope Francis reached the end of the monument where he set a candle in a large glass bowl and once again stood in silence, clasping his hands together over his chest in prayer.

While he prayed, the voice of Poland’s Chief Rabbi Michael Joseph Schudrich echoed Psalm 130 in Hebrew throughout the camp. The psalm begins with a cry to God: “From the depths I have cried out to you, O Lord.”

The event ended with the pope greeting 25 people honored as “righteous among the nations,” a recognition of non-Jews who risked their lives to save Jews from the Nazi extermination.

Among those present for the solemn occasion was Rabbi Abraham Skorka, a longtime friend of the pope from Buenos Aires.

Speaking to journalists July 28, Rabbi Skorka recalled a telephone conversation with Pope Francis in which he asked about the visit to Auschwitz.

“The pope told me, “I am going to behave the same way I did in Armenia — the places where people were killed — I will remain silent,'” he said.