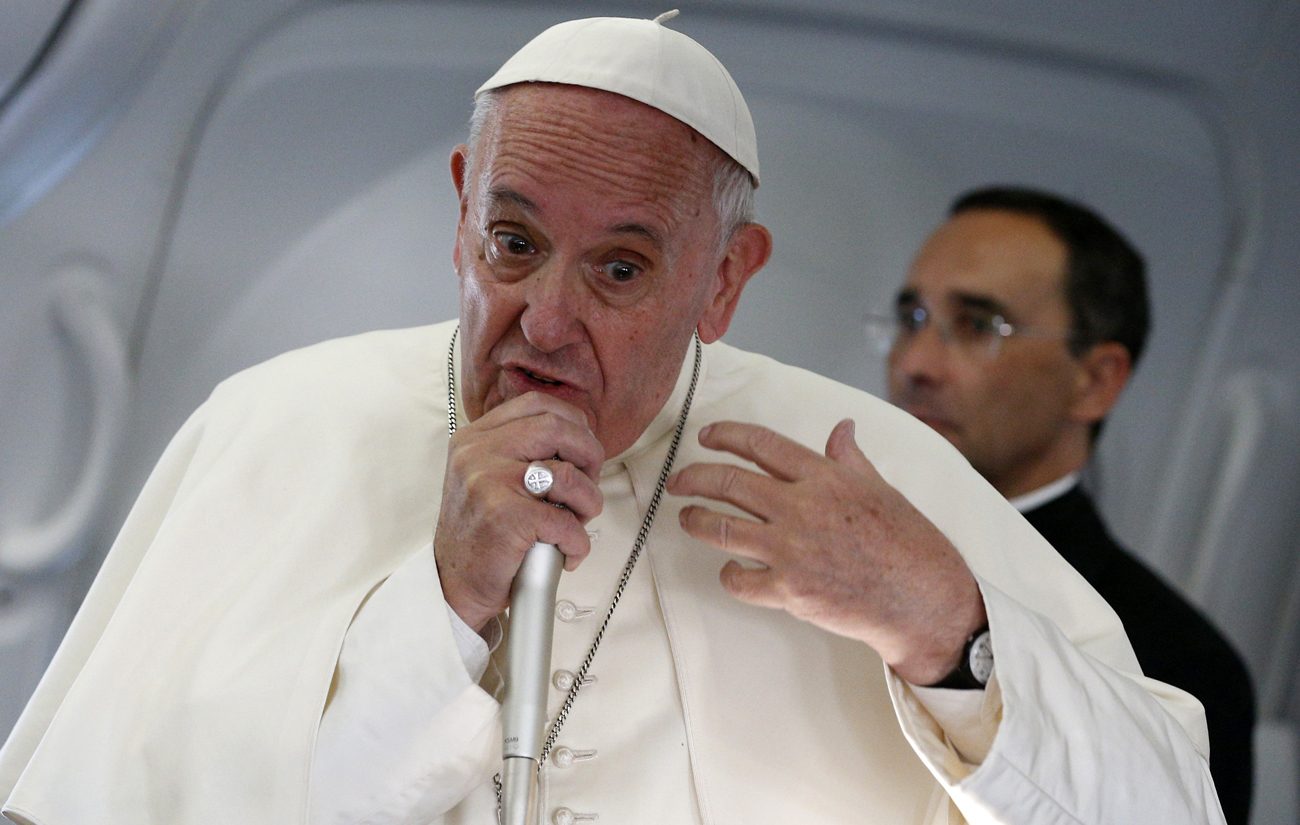 ABOARD THE PAPAL FLIGHT FROM KRAKOW, Poland (CNS) — Speaking to journalists aboard his return flight from Krakow, Poland, July 31, Pope Francis stressed that violence exists in all religions, including Catholicism, and it cannot be pinned to one single religion.

Spending about 30 minutes with reporters and responding to six questions, Pope Francis was asked to elaborate on comments he had made flying to Poland July 27 when he told the journalists that religions are not at war and want peace.

The pope’s initial comment came in speaking about the murder July 26 of an elderly priest during Mass in a Catholic church in Saint-Etienne-du-Rouvray, France. Two men, armed with knives, entered the church during Mass. The attackers murdered 85-year-old Father Jacques Hamel, slitting his throat. The Islamic State group later claimed responsibility for the murder.

Although the death of the French priest was committed in the name of Islam, the pope said that it is unfair to label an entire religion violent because of the actions of a few fundamentalists.

“One thing is true. I believe that in almost all religions, there is always a small fundamentalist group. We have them, too,” the pope said. “When fundamentalism goes to the point of killing — you can even kill with the tongue. This is what St. James says, but (you can kill) also with a knife. ”

“I do not think it is right to identify Islam with violence. This is not right and it is not true,” he said.

Instead, the pope said, that those who choose to enter fundamentalists groups, such as the Islamic State, do so because “they have been left empty” of ideals, work and values.

The pope was also asked about accusations of sexual abuse made against Australian Cardinal George Pell, prefect of the Secretariat for the Economy.

Pope Francis said the accusations are unclear, but are in the hands of investigators. He also warned against deeming alleged accusations true or false before they are investigated thoroughly.

“If I would give a verdict for or against Cardinal Pell, it would not be good because I would judge prematurely,” he said. “We should wait for justice and not judge beforehand (or) a verdict by the press, a verdict based on gossip.”

Pope Francis was also asked if he was all right after he stumbled and fell during Mass outside the Marian shrine of Jasna Gora in Czestochowa July 28. He missed a step as he was blessing the altar and an image of Mary with incense.

“I was looking at the Madonna and I forgot about the step,” he recalled. “I had the thurible in my hand and I just let myself fall. If I had tried to resist, then there would have been consequences.”

He also emphasized the importance of a “dialogue between past and future” and said older and younger generations must learn to speak to and learn from each other.

“Listen to them, speak to them because they must learn from us and we must learn from them. That is how history is made, that is how we grow. Without closing them off, without censuring them,” Pope Francis said.

NEXT: Pope Francis urges World Youth Day volunteers to be ‘hope of the future’