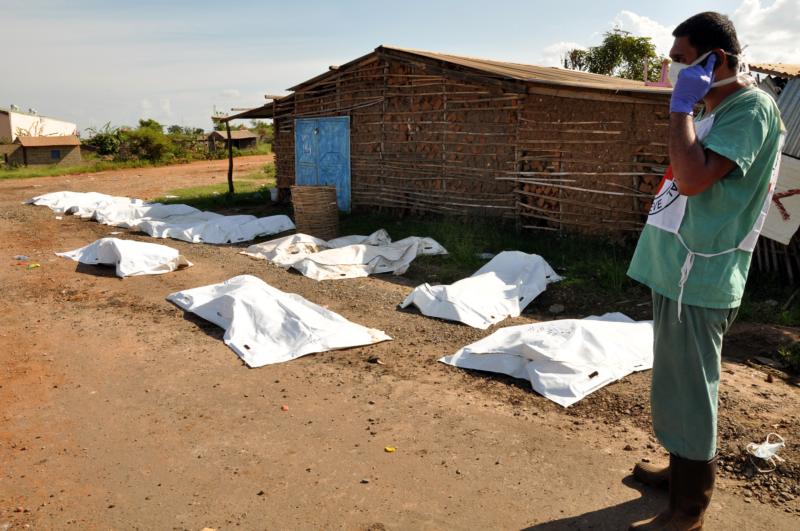 A worker from the International Committee of the Red Cross speaks on his phone July 16 as workers prepare to move bags containing bodies of unidentified people killed in the recent fighting in Juba, South Sudan. Pope Francis sent a high-ranking cardinal to South Sudan to urge for a peaceful end to the escalating violence in the country. (CNS photo/Jok Solomun, Reuters)

ROME (CNS) — Pope Francis sent a high-ranking cardinal to South Sudan to urge for a peaceful end to the escalating violence in the country.

Cardinal Peter Turkson, president of the Pontifical Council for Justice and Peace, met with President Salva Kiir in the capital, Juba, July 19 and delivered a letter on the pope’s behalf.

According to SIR, the Italian bishops’ news agency, a local missionary priest confirmed the pope’s concern for the increasing violence in the country.

“We know that Pope Francis is following every evolution (of the crisis) very closely. Cardinal Peter Turkson was sent by the pope here in these days to us in Juba,” said Italian Comboni Father Daniele Moschetti, superior of the Comboni Missionaries in Juba.

For nearly a year, South Sudan has been trying to emerge from a civil war caused by political rivalry between Vice President Riek Machar and President Salva Kiir, who represent different ethnic groups. Violent clashes spread across the city and left tens of thousands of people dead since the beginning of their rivalry in December 2013.

Although a cease-fire is currently in effect in Juba, Father Moschetti said the threat of violence continues to loom large over the people and the church, which includes 350 local and international missionaries.

“The climate, including toward the church, is changing: We are all at risk,” SIR reported him as saying.