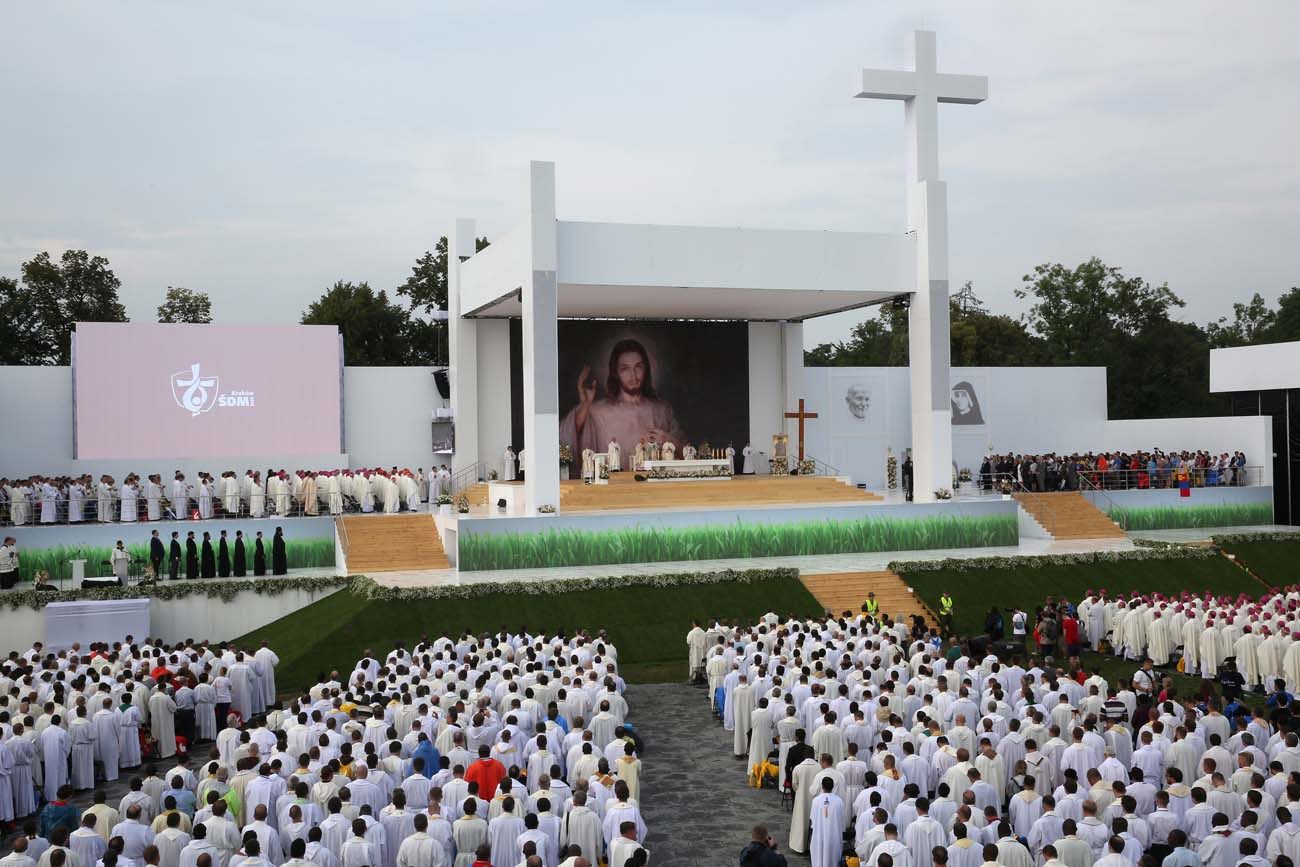 “We come from every nation under heaven, like those who came in great numbers to Jerusalem on Pentecost Day, but there are incomparably more of us now than 2,000 years ago, because we are accompanied by centuries of preaching the Gospel,” Krakow Cardinal Stanislaw Dziwisz said during the July 26 opening Mass.

“We bring experience of various cultures, traditions and languages. But what we also bring are testimonies of faith and holiness of our brothers and sisters, followers of the risen Lord, of past generations as well as the current generation,” he said.

The cardinal preached to an estimated 200,000 pilgrims from 187 countries in Krakow’s Blonia Park, a day before the scheduled arrival of Pope Francis.

He said a special clock had been fitted to the front of the city’s cathedral, “counting the days, hours, minutes and seconds,” since 2013, when the city was announced as the venue for World Youth Day this year.

He added that Krakow was the city from where St. John Paul “set off to preach the Gospel,” as well as where St. Faustina Kowalska helped spread devotion to Divine Mercy worldwide in the 20th century.

“You have come from all continents and nations, from the East and West, North and South of our globe,” said Cardinal Dziwisz, who was personal secretary to St. John Paul for 39 years.

“You bring with you many experiences. You bring many desires. You speak numerous languages. But starting today, we are going to communicate with each other in the language of the Gospel — a language of love, brotherhood, solidarity and peace.”

Up to 2 million young people were expected to attend World Youth Day July 26-31. Nearly 50 cardinals, 800 bishops and 20,000 priests from around the world also were to attend.

The opening Mass was partially disrupted by heavy rain, which forced the temporary closure of Krakow’s airport. The Mass site featured giant portraits of Sts. John Paul and Faustina by the main altar.

A Catholic teacher from the pope’s native Argentina, Clara Retta, told Catholic News Service she counted on Pope Francis to encourage young people to “go out to people and do things for others” and to bring a “message of joy and simplicity.” 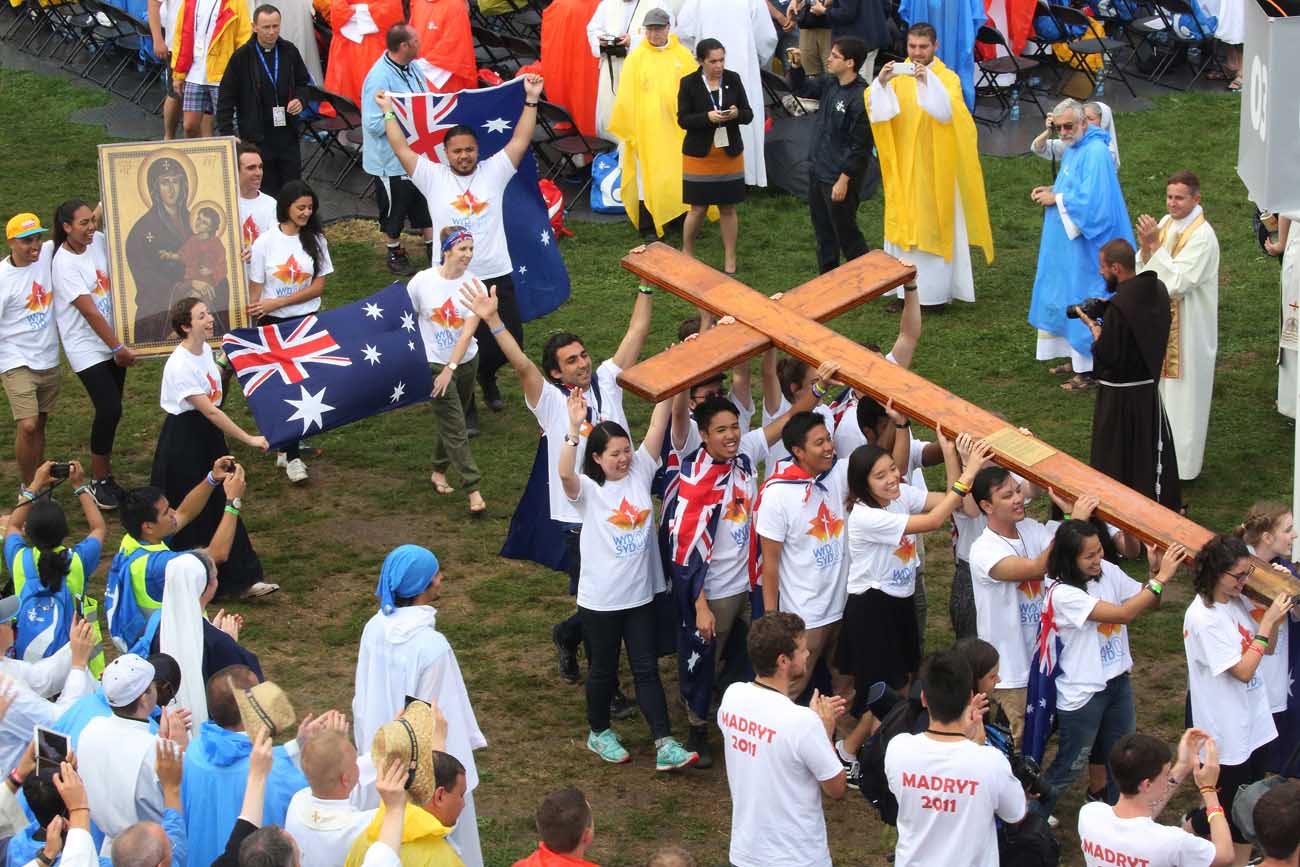 She added that she believed the 7,000 Argentines attending World Youth Day had been warmly welcomed in Poland and were “very excited and proud” to be seeing the pope.

Carolina Alraheb, a Catholic from the war-torn city of Homs, Syria, said she hoped her countrymen would come to see themselves as “part of one family” by somehow maintaining a “deep relationship with God.”

“I hope the pope will also ask our people to deepen their own relations with themselves and find meaning in life again,” said the 25-year-old physics student, who was among two dozen Syrian Catholics at World Youth Day with two Jesuit priests from Aleppo.

“Home is full of orphans and widows, and many people have asked where God is. But I realized he’s still here, suffering with us and staying with the young Syrians, who’ll one day rebuild their country as a house of God,” she said.

In his homily, Cardinal Dziwisz said young people had come to Krakow from peaceful countries, “where families are communities of love and life and where young people can pursue their dreams,” but also “from countries whose people are suffering due to wars and other kinds of conflicts, where children are starving to death and where Christians are brutally persecuted.”

He added that young Catholics would bring to World Youth Day their experiences of “living the Gospel in a difficult world, as well as their “fears and disappointments, hopes and yearning, and desire to live in a more human, more fraternal and solidary world.”

“Among us are young pilgrims from parts of the world that are ruled by violence and blind terrorism, and where authorities usurp power over man and nations, following insane ideologies,” the cardinal told young pilgrims, who waved flags and banners during the Mass.

“May the flame of love engulf our world and rid it of egoism, violence and injustice, so that a civilization of good, reconciliation, love and peace will be strengthened on our earth.”

Pope Francis was to arrive in Krakow July 27 on his first visit to Poland. He was scheduled to travel to the former Nazi concentration camp of Auschwitz-Birkenau during his stay, as well as leading an open-air Mass at the country’s Jasna Gora national sanctuary. He planned to pray before the relics of St. Faustina at Krakow’s Divine Mercy center.

A Polish World Youth Day ambassador, Jan Mela, who founded a youth support group after losing an arm in a road accident, said he hoped Pope Francis would help young people to “find sense in life” and overcome a widespread sense of “dissatisfaction and fatalism.”

Meanwhile, a Catholic from neighboring Ukraine, Elisabeth Dotsenko, said she and other members of the 5,000-strong Ukrainian Catholic delegation had got along well with Russian pilgrims in Krakow, despite the war currently raging in their country. She said she believed “human connections” could help overcome most political conflicts.

Archbishop Jean-Claude Hollerich of Luxembourg told CNS he believed the pope was able to “speak in the language of the Gospel, but not in complex theological language,” and would discourage notions that Christians were “up against a bad secular world” by showing young people that God’s love was “for everyone equally.”

Boston Cardinal Sean P. O’Malley told CNS he was impressed by the huge numbers who had come to “the city of John Paul II,” as well as the enthusiasm of young Americans attending the festival, adding that he was sure the pope would offer “many resonating messages.”

“In our more and more secularized society, it’s very reaffirming for the faith of young people to be surrounded by hundreds of thousands of others like this. It can have an important long-lasting effect on their relations with the church and Holy Father, as well as on their experience of the church’s catholicity.”

PREVIOUS: Pope urges Poles to value their memories, but be open to change