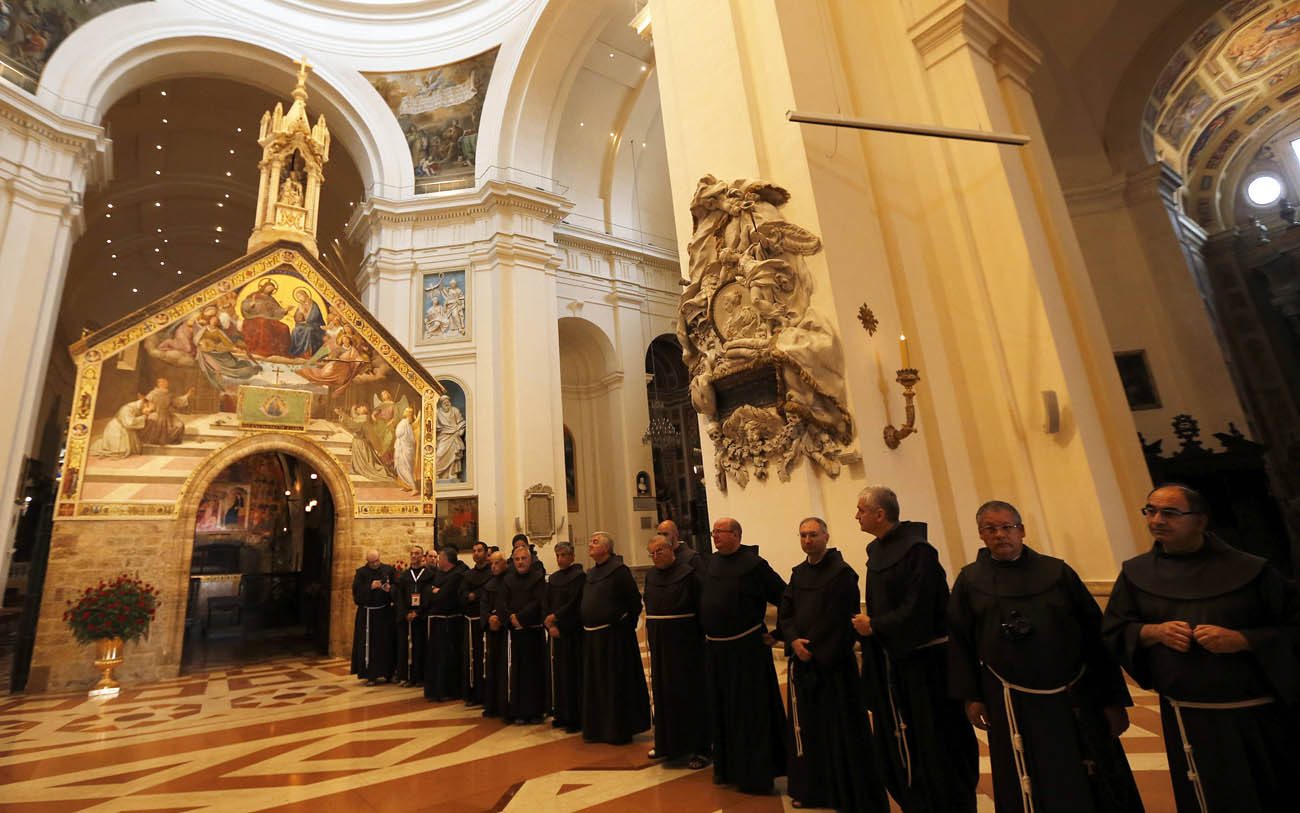 Franciscan friars wait for the arrival of Pope Francis outside the Portiuncola, the small stone chapel inside the Basilica of Santa Maria deli Angeli in Assisi, Italy, in this Oct. 4, 2013, file photo. Pope Francis plans to make a "simple and private" visit to the Portiuncola Aug. 4. The stone chapel was rebuilt by St. Francis. (CNS photo/Stefano Rellandini,, Reuters)

VATICAN CITY (CNS) — To mark the 800th anniversary of the “Pardon of Assisi,” an indulgence earned by visiting faithful who confess their sins and make a sincere promise of repentance, Pope Francis will visit a stone chapel rebuilt by St. Francis of Assisi.

The pope’s visit to the small Portiuncola chapel Aug. 4 was to be part of a “simple and private” pilgrimage during the Year of Mercy, according to Vatican Radio. The pope was expected to pray in the chapel and speak a few words, the radio said July 4.

The chapel, now contained inside the Basilica of Santa Maria degli Angeli, is where the saint founded the Franciscan order. Pope Francis previously visited the site on the feast day of the saint — his namesake — Oct. 4, 2013.

The August visit is meant to commemorate the 800th anniversary of the “Pardon of Assisi,” also called the Portiuncula Indulgence, which can be earned as part of a solemn annual celebration each Aug. 2.

St. John Paul II once said the message of the Portiuncula Indulgence is one of “pardon and reconciliation, that is, of grace, which divine goodness pours out on us if we are well disposed because God is truly rich in mercy.”

St. Francis was overwhelmed by the realization that God forgave all of his sins, the late pope had said in a letter in 1999. The saint wanted everyone to be able to share his experience of God’s mercy, so he asked for and obtained from the pope a plenary indulgence for pilgrims who would come to the Portiuncula prayerful and repentant, the late pope had said.

The small Portiuncula chapel was an abandoned Benedictine chapel that was then entrusted to St. Francis in the early 1200s; when St. Francis heard God tell him to rebuild the church, he first thought he meant the little chapel.

St. Francis restored the chapel in 1207. It was where he founded his religious order and where St. Clare publicly professed her vows.