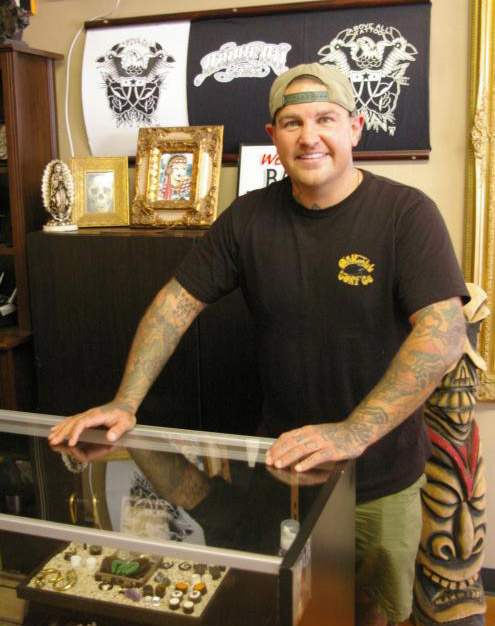 Kurt Deetjen is seen inside Above All Tattoo in San Diego, where he works as a tattoo artist.(CNS photo/Denis Grasska, The Southern Cross)

SAN DIEGO (CNS) — Kurt Deetjen is standing in front of Above All Tattoo in the city’s Pacific Beach neighborhood, where he works as a tattoo artist.

He’s wearing a baseball cap backward. His arms and legs are an ornate tapestry of tattoos. There are others on his hands, and still more peek out from beneath the collar of his T-shirt and extend up his neck.

A member of St. Brigid Parish for about four years, Deetjen told The Southern Cross, newspaper of the San Diego Diocese, “It took me about two years to get the guts … to volunteer for things or be part of the community, just because I felt so different than everybody else. I know I looked different.”

But, ultimately, Deetjen came to accept that “different” isn’t always bad and that it might even be a positive when it comes to evangelization.

The fact that he does not fit many people’s preconceived notions of what a practicing Catholic looks like, the 37-year-old said, sometimes makes people “a little more comfortable” about opening up to him and sharing their personal stories.

“I don’t have a problem … talking about the fact that I am a Catholic and I go to church and I want to be a good person,” said Deetjen, who will unashamedly explain that he needs to leave work a little early on Wednesday nights to attend Bible study, that Mass is his priority on Sundays, and that, on two Monday evenings each month, he serves dinner to homeless people.

Through conversations in the tattoo shop, Deetjen has inspired some clients to check out St. Brigid Parish, which is a 10-minute walk from the shop. Even one of his many tattoos — a depiction of Jesus that can be seen on the back of his head — has allowed him to share the good news, he said, “because, most of the time, I can’t hide it” and people will ask about it.

Deetjen was 17 when he got his first tattoo and has gotten so many since that he has lost count. His most recent is of a cross, anchor and heart, symbolizing the theological virtues of faith, hope and love.

Originally from Chicago, he was working at a hospital and studying to be an emergency medical technician when he began his transition into a full-time career as a tattoo artist. He has been in the profession for 16 years.

He came to San Diego about 10 years ago as a guest artist at a local tattoo shop. After several return trips, he decided to make San Diego his home.

During the first of those visits, he rode past St. Brigid Parish on a beach cruiser and felt something tugging at him to come back to the church.

“I went to Catholic school, I was baptized, confirmed, that whole deal,” Deetjen said. But, by the time he entered high school, he was in an angry place and dealing with “a lot of problems,” including drugs. Though he would accompany his family to Mass on holidays, he was no longer a regular churchgoer.

“Before I started going to St. B’s, I was just so embarrassed at my past and some of the things I had done … that I wouldn’t even go into the church,” he recalled. “I would just go outside St. B’s and pray in the evening when no one was there, just because I felt so desperate for that relationship (with God).”

Eventually, however, he took the plunge and found at St. Brigid’s both a supportive community and many opportunities to serve others.

At the 11 a.m. Sunday Mass, he discovered a “church buddy” in a 92-year-old woman he would sit next to each week. At a Thanksgiving dinner organized by the parish’s vibrant young adult community, he encountered a “really welcoming” group of Catholic peers.

He also began volunteering regularly with the parish’s Neighbors in Need ministry, which serves dinner to homeless people twice a month in the parish hall. His passion for it eventually led to a leadership position. Deetjen volunteers with the parish youth ministry and has been a leader on young adult retreats. For the past year and a half, he also has served as a mentor at Nativity Prep Academy, a tuition-free school for low-income children.

Last November, in recognition of his service, Deetjen was among 29 people honored by Catholic Charities, Diocese of San Diego for living out their faith through service to poor and marginalized people.

“Not only does Kurt himself have a great passion for serving the poor, but he has also been very persuasive and effective in inviting and involving other young adults in this ministry,” said Msgr. Steven Callahan, St. Brigid pastor.

Having reconnected with his faith and become an active parishioner, Deetjen has felt conflicted at times about his work as a tattoo artist and uncertain whether his livelihood is compatible with his Catholicism. But a priest encouraged him to remain where he was, bringing Christ to those he encounters in his community and his workplace, and acting as “a light in the darkness.”

As much as he may regret the mistakes of his past, Deetjen believes those failures have given him an authenticity and an approachability in the eyes of some.