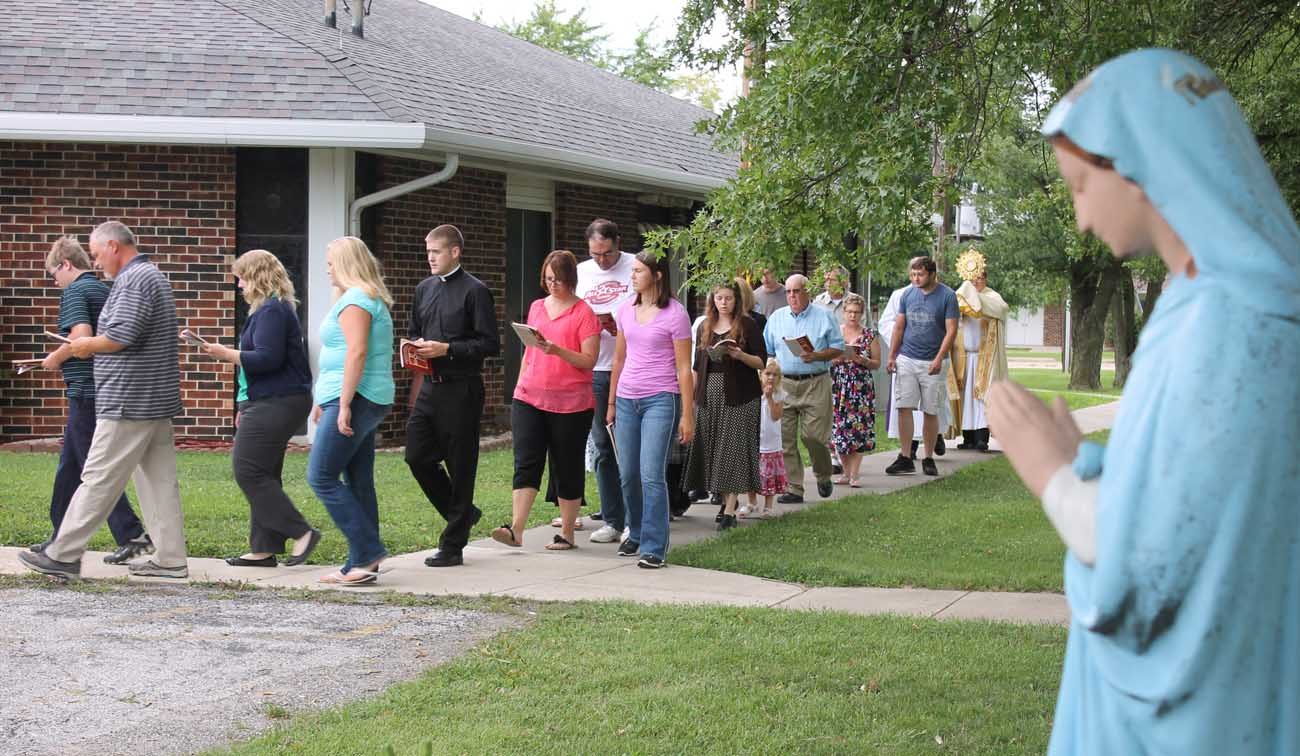 Parishioners walk to Mass at St. Clement Church in St. Clement, Mo., July 30. The church had been vandalized and desecrated the previous Sunday. (CNS photo/Jay Nies, Diocese of Jefferson City)

“Christ restored completely what Satan had taken from us,” Father Peckman, pastor of St. Clement Parish, said. “It was as if the sun was breaking over the horizon to let us know that the Light of Christ conquers the darkest sorrow the devil can inflict.”

The previous Sunday, July 24, a visiting priest arrived to discover that the church had been vandalized and desecrated. Altar wine and feces had been smeared onto the altar, the tabernacle, the baptismal font, the reconciliation rooms, the statues, the vestments and the large books of prayers and readings for Mass.

The blessed oils had been spilled on the floor, and the vigil candle and key to the tabernacle were missing.

“I was in shock, but I didn’t want it to put a black cloud over the Mass, so I started cleaning up,” said Father Dennis Rausch, who was in St. Clement to fill in for Father Peckman and give a mission appeal for Cross Catholic Outreach.

The people arriving for Mass were dumbfounded when he announced what had happened.

“Right from the start, people were in shock,” he told The Catholic Missourian, newspaper of the Diocese of Jefferson City. “They just stood there like statues, staring. At that moment, I believe they felt that their church, their faith, their worship and they themselves had been desecrated.”

Father Rausch asked everyone to join hands in praying the Our Father, resolving to set aside all bitterness and face this moment as one family — God’s family.

He asked God to forgive the person, obviously sick, who had desecrated his dwelling place.

“Lord, hear our prayer!” the people thundered back.

“I was just a visitor, but I kept using words like ‘we’ and ‘us’ and ‘our,'” the priest recalled. “I felt their pain with them. I felt it as their priest.”

Right away, parishioners started deep-cleaning the church and working to get the stains out of the vestments.

“They’re a good community,” Father Rausch stated. “They are really a people of faith.”

About 175 people gathered in the church that evening to pray for healing for themselves and the person responsible for the desecration.

“We must be doing something right!” Deacon Mark Dobelmann of neighboring St. Joseph Parish in Louisiana cried out from the pulpit. “If we weren’t, the devil wouldn’t be bothering with us.”

Later that night, police took a woman into custody. She was later identified as Linda M. Howard, 54, of Bowling Green. She was charged with a class-D felony of property damage in the first degree.

She confessed to having committed the acts of desecration because she was angry at God.

Howard lives nearby and had recently joined the parish. Fellow parishioners had been visiting her and bringing her Communion.

She told police that she returned to the church that night to tell God she was sorry for what she had done.

Whenever a church is desecrated, church law calls for an appropriate ritual of prayer and atonement to take place before the church can be used again for Mass and the sacraments.

Bishop Gaydos went to St. Clement July 30 to preside at a morning Mass that included “Public Prayer After the Desecration of a Church.”

Joining him at the altar were Father Peckman; Father Daniel Merz, chairman of the Diocesan Liturgical Commission, who is a St. Clement native and was ordained in St. Clement Church; and other priests of the diocese. Deacons from several parishes assisted.

“There is nothing God’s saving love cannot overcome,” the bishop said. “Let us be open to and recognize how close the Lord is in our midst.

“There is nothing in our lives that has not already been conquered by Christ,” Bishop Gaydos continued. “He asks us to trust him, to let our fears go, to enter into prayer to the Holy Spirit so we can ascent to a new level of hope.”

He emphasized that Christ’s message is one of forgiveness and transformation.

“That means we who receive so much forgiveness must offer reconciliation to anyone who has hurt us, and must also forgive ourselves for being human,” he said.

He implored everyone to stand in prayerful solidarity with all of the Christians throughout the world who are suffering persecution and death for their faith.

“Through Jesus, we are already able to share in his victory over all sin and over death,” he said. “The rest of our future begins right now.”

With incense burning and holy water mixed with salt, Bishop Gaydos traversed each room, corner and aisle of the church, blessing it and the people, reclaiming it for Christ.

The deacons and servers then prepared the altar and lit the candles.

After Communion, Father Peckman exposed the Blessed Sacrament in a monstrance on the altar. Everyone knelt down in adoration before adjourning to the parish hall for brunch. Afterward, about 200 took part in a procession around the outside and inside of the church.

Father Peckman said the parishioners’ response through it all surpassed all of his hopes and expectations.

He said there were no calls for vengeance — only mercy, concern and a desire to help a fellow parishioner who sincerely regrets her actions.

He encouraged everyone to look ahead with new energy and openness to wherever God is calling the church to go.