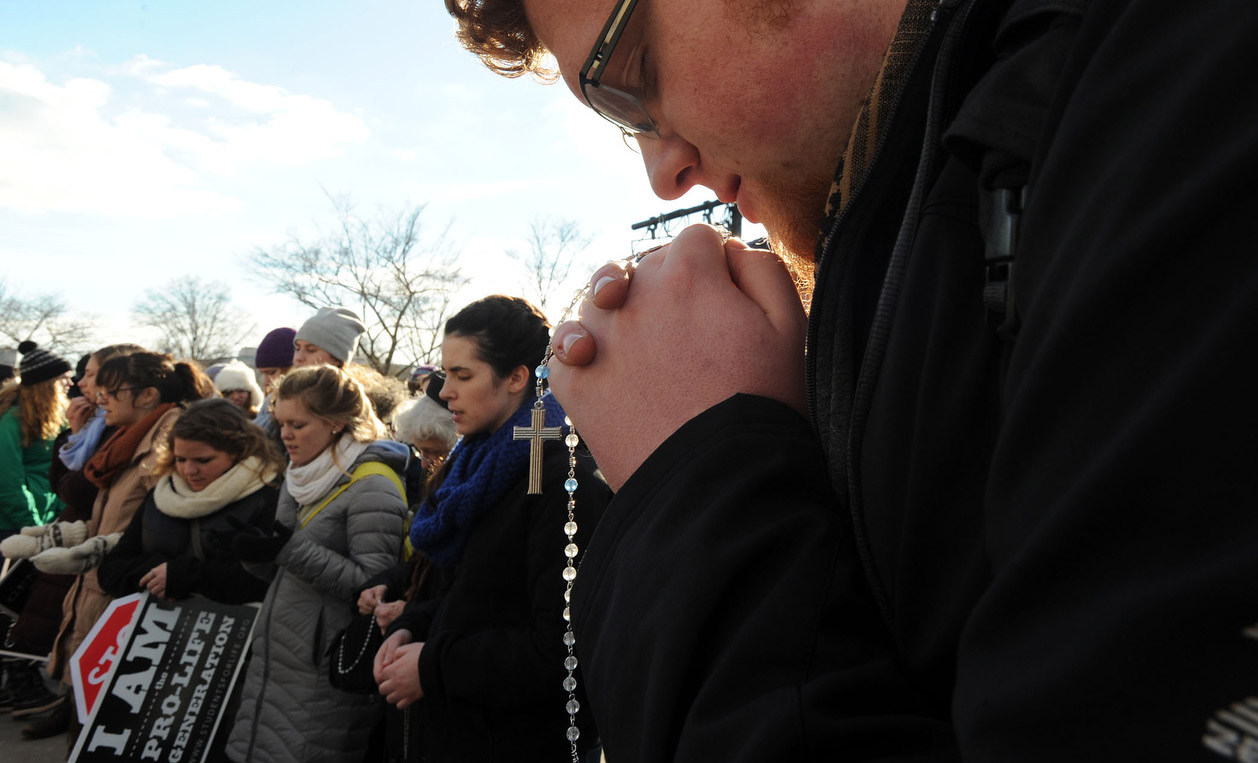 Andrew Juodawlkis prays the rosary with fellow members of Students for Life of Michigan in this Jan. 22, 2015 file photo. (CNS photo/Leslie E. Kossoff)

FALLS CHURCH, Va. (CNS) — On a sweltering Saturday morning on a busy street in the Washington suburb of Falls Church, about a dozen college and high school students were trying to improve a negative perception they feel the public has of protesters who hold vigils outside of abortion clinics.

“As long as we’re on the sidewalk, it’s fine,” said Lori Cascio, a regional coordinator for Students for Life. “If someone steps onto the property, the clinic will call the police.”

Because the clinic was not surrounded by a parking lot, “it’s harder to talk to the girls here,” said Cascio, who drove in from Charles Town, West Virginia.

Volunteers in orange smocks stood at the doorway to escort patients inside. There were no words exchanged between the groups, and no visible police presence. One man near the doorway brandished a sign encouraging motorists to honk their horns if they were “pro-choice.”

Groups of high school and college students at 30 locations nationwide spent that morning standing outside of abortion clinics, handing out literature for crisis pregnancy centers and attempting to counsel women who were going in.

The goal, said Students for Life publicist Kristina Hernandez, was “to change the perception. There’s a stereotype of older white men standing outside abortion clinics yelling through bullhorns as people go in.” Planned Parenthood uses audio of such protesters as part of a virtual-reality training program.

Any time they thought they’d gotten a woman to change her mind and turn back, the group referred to this as a “baby save.”

“We have seen in two years of our existence almost 1,350 babies saved, 30 abortion workers who have left the business, two abortion facilities closed,” Lauren Muzyka, a lawyer who is the executive director of Sidewalk Advocates for Life, said during an online training session Aug. 4. Anyone at the Falls Church event who missed the online session got their instructions at St. Leo the Great Catholic Church in nearby Fairfax.

Muzyka held up a small pink plastic fetus, describing it as an effective prop. She also reminded students that when encountering a woman about to enter a clinic, “she may start to cry, she may freeze up. So in that case, I just generally address the problem.”

She advised students to tell women, “You don’t want the first time you say hello (to your baby) to say goodbye.”

Protesters in Dallas brought fetal models, showing various stages of development. Jillian Ferguson, another regional coordinator with Students for Life, reported that an experienced counselor with the local Catholic pro-life committee persuaded one woman, already a mother of three, to change her mind by handing her the model and saying, “That’s what your baby looks like right now.”

The Falls Church group, which included students from Paul VI and Bishop O’Connell high schools, didn’t carry props and only spoke with “a couple of girls,” Cascio told Catholic News Service. “They didn’t have too many girls in for abortions today. I think about three. It’s still a tragedy. But I think our presence here is already making a difference.”

“Just standing outside an abortion clinic is a terrifying thing,” said Hernandez. “You know what is happening inside those walls.”

Cascio, just out of George Mason University and newly married, has been protesting at clinics for three years, including at one in Manassas that has since closed.

“Abortions are usually performed here on Saturdays,” she said, adding that “this facility changes its times of the procedures” to misdirect protesters with an irregular schedule.

“Go out there and love people, offer them resources, and you could see some amazing miracles,” Muzyka advised.

The Falls Church group handed out literature from 8 to 10 a.m., then participated in an hourlong prayer vigil.

NEXT: Mercy Farm offers visitors peace and quiet, lessons in caring for earth