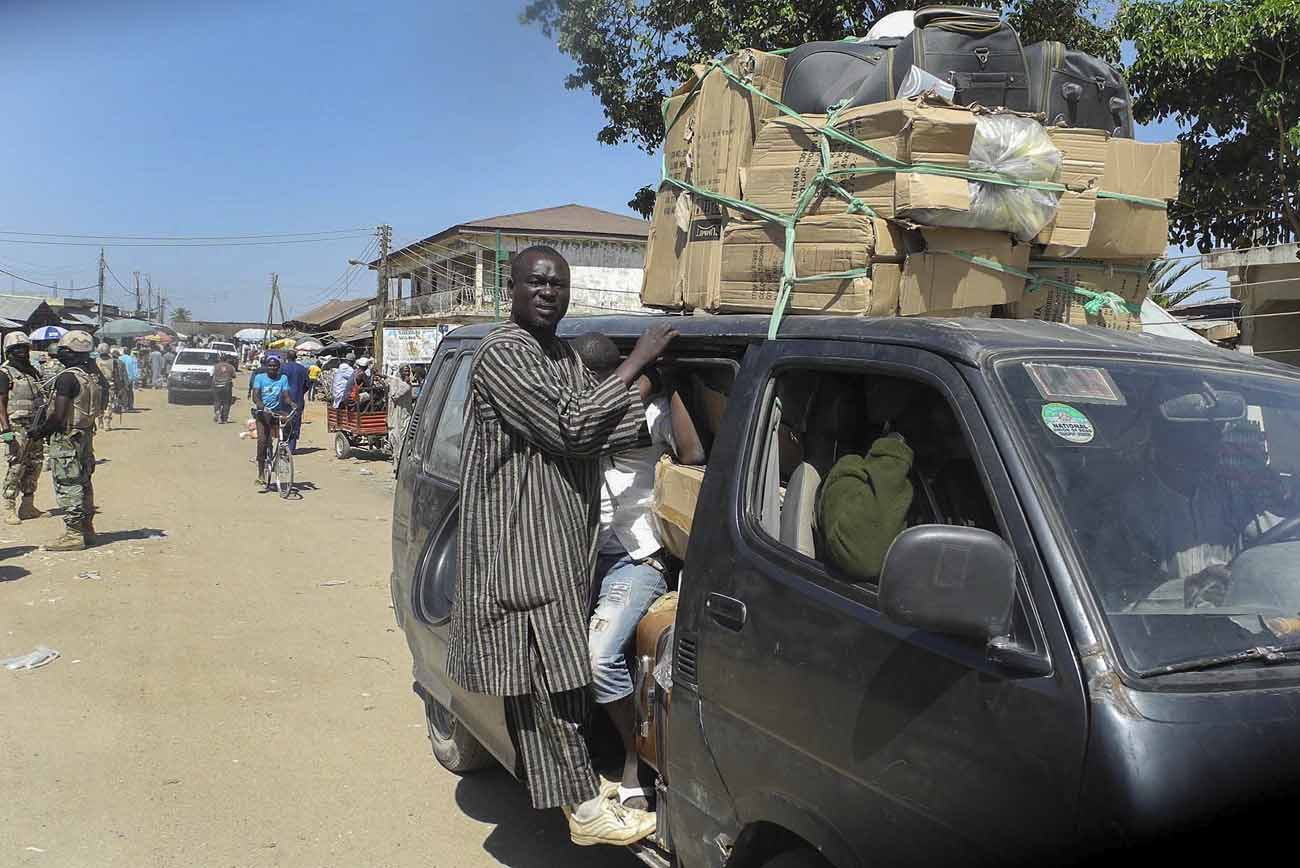 Nigerians are seen packed in a van fleeing Mubi, Nigeria, following attacks in 2014. Boko Haram has claimed responsibility for scores of attacks on churches and mosques, often killing worshippers during religious services or immediately afterward.(CNS photo/EPA)

Although Boko Haram in Nigeria and other terrorist groups elsewhere are cited in the report’s executive summary as posing a major threat to religious freedom in general, these groups also targeted fellow Muslims.

Now in its 18th year, the congressionally mandated report documents the status of the universal human right to religious freedom in 199 countries around the world.

At a news conference, Rabbi David Saperstein, the State Department’s ambassador-at-large for international religious freedom, said the new report “touches on all manner of restrictions to religious freedom.” But he highlighted in particular “this year the chilling, sometimes deadly effect of blasphemy and apostasy laws in many places of the world, as well as laws that purport to protect religious sentiments from defamation.”

The report said: “Societal passions associated with blasphemy — deadly enough in and of themselves — are abetted by a legal code that harshly penalizes blasphemy and apostasy. Such laws conflict with and undermine universally recognized human rights.

“All residents of countries where laws or social norms encourage the death penalty for blasphemy are vulnerable to attacks,” the report said.

The report spoke of the killing of Farkhunda Malikzada in Kabul, Afghanistan. Malikzada, 27, had stopped at a Muslim shrine to say her prayers and chatted with a caretaker there about the sale of charms at the shrine, some of which Malikzada considered to be un-Islamic. As the situation escalated, the caretaker accused Malikzada of burning a copy of the Quran, a crime punishable by death in Afghanistan. The argument soon attracted a mob.

Malikzada “denied the accusations and tried to defend herself from the increasingly agitated mob. Before long, a member of the crowd urged the mob to take ‘justice’ into its own hands and kill her. Some of the police nearby tried to intervene,” the report said, but they gave up and “watched as the crowd tormented and killed its victim. She was beaten with sticks and boards, kicked, run over by a car and dragged, thrown into a dry riverbed, stoned, and finally set on fire as bystanders recorded the crime and police watched every act of barbarity.”

The report noted that Malikzada died during the attack, yet “the crowd continued to abuse her lifeless body.”

In neighboring Pakistan, more than 62 people have been killed since 1990 by mob violence, according to the Center for Research and Security Studies in Pakistan. In 2013, there were 39 registered cases of blasphemy against more than 350 people, according to the Human Rights Commission of Pakistan. The U.S. Commission on International Religious Freedom report said more than 40 people remain on death row for blasphemy, “many of whom are members of religious minorities.”

According to an Aug. 10 report by the Express Tribune, a Pakistani online newspaper, a one-man tribunal suggested making changes in Pakistan’s blasphemy law to ensure the law is not misused. Many have pointed to false accusations being made as a result of a dispute over unrelated matters. The tribunal was convoked in 2009 after rioting in one town killed seven Christians.

In Mauritania, one man published an online article that the government alleged criticized the prophet Muhammad and implicitly blamed the country’s religious establishment for the plight of the country’s “forgeron,” or blacksmith caste, which historically has suffered discrimination. In 2014, the report said, a court convicted him of apostasy — a charge subsequently downgraded in April after the blogger “repented” — and sentenced him to death. The man remains in jail.

In Nigeria, Boko Haram, which pledged allegiance to Daesh, another name for the Islamic State group, “continued to launch indiscriminate, violent attacks targeting both Christians and Muslims who spoke out against or opposed their violent ideology,” the report said. “Boko Haram claimed responsibility for scores of attacks on churches and mosques, often killing worshippers during religious services or immediately afterward.”

The report had some good news for Christians.

During Pope Francis’ visit to the Central African Republic last November, the report said, “there was a peaceful march of Christians and Muslims in the Fatima neighborhood. The pope was escorted by Muslim youth from the central mosque to the stadium in Bangui,” where he celebrated Mass for 30,000 citizens.

“Religious leaders said that the pope’s visit helped restore a significant degree of trust between religious communities. They also said that the pope’s visit led to the dismantling of some of the physical barricades that had previously divided Muslim and Christian neighborhoods.” The barricades, which trapped Muslims inside their neighborhoods, had been erected after Christian-Muslim violence that killed 41 civilians.

In the United Arab Emirates, “the Roman Catholic Church in Abu Dhabi opened a second church in the large industrial neighborhood of Musaffah, where many migrant laborers live and work, and where several new churches were built in recent years,” the report said.

The full State Department report on international religious freedom can be found here.