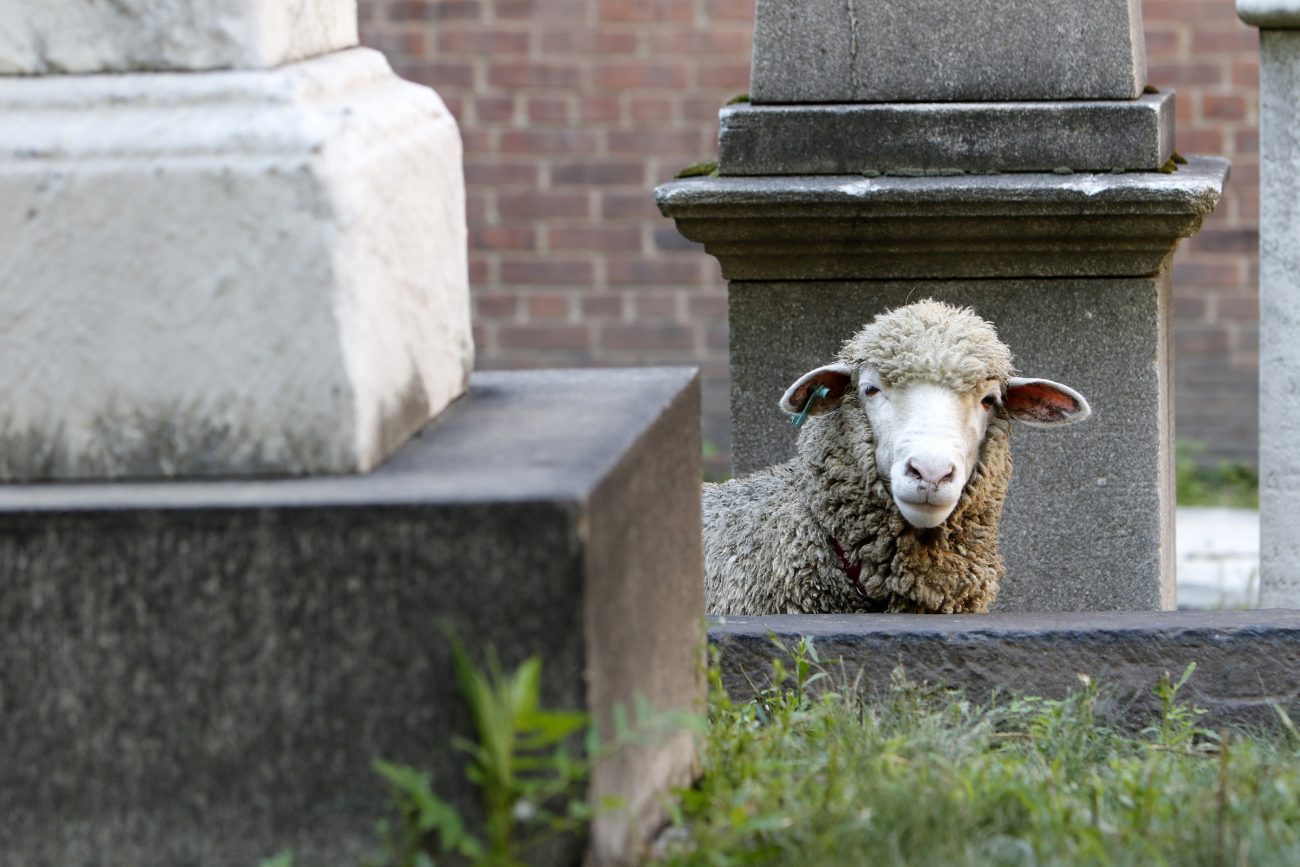 A sheep looks over a wall in the cemetery at the Basilica of St. Patrick's Old Cathedral in New York City Aug. 9. The parish is uses three grazing sheep to cut the graveyard's grass this summer. (CNS photo/Gregory A. Shemitz)

For the third straight year, a historic New York City church has imported three sheep from an upstate New York farm to serve as organic lawn mowers in its two-century-old cemetery.

The woolly visitors graze on grass and weeds growing in between and around the weather-eroded headstones and obelisks in the north graveyard of the Basilica of St. Patrick’s Old Cathedral, a structure dedicated in 1815 and located in the Lower Manhattan neighborhood of Nolita, for “North of Little Italy.”

The sheep arrived Aug. 7 following an 85-mile ride in a pickup truck from a fiber farm in New Paltz, where the owner breeds Cormo Sheep exclusively for the high-quality fleece sought by knitters.

They roam on a half-acre plot of land that contains the graves of Civil War heroes, aristocrats and other citizens of 19th-century New York. The body of sainthood candidate Pierre Toussaint once rested here before the liberated slave’s remains were removed and transferred to the crypt at St. Patrick’s Cathedral in midtown in 1989.

Msgr. Donald Sakano, St. Patrick’s pastor, told Catholic News Service that the idea of bringing sheep to the cemetery was initiated in 2014.

“It started with a conversation I had with a groundskeeper who was planning to retire,” Msgr. Sakano recalled. “I joked, ‘What do you expect me to do now, get sheep?’ The second I said it I thought, ‘That might be a good idea,’ even though I knew nothing about sheep-keeping here in New York City.”

After weeks of research and conversations with the city’s health department, the first sheep arrived in mid-September of that year and were subsequently named Gold, Frankincense and Myrrh. 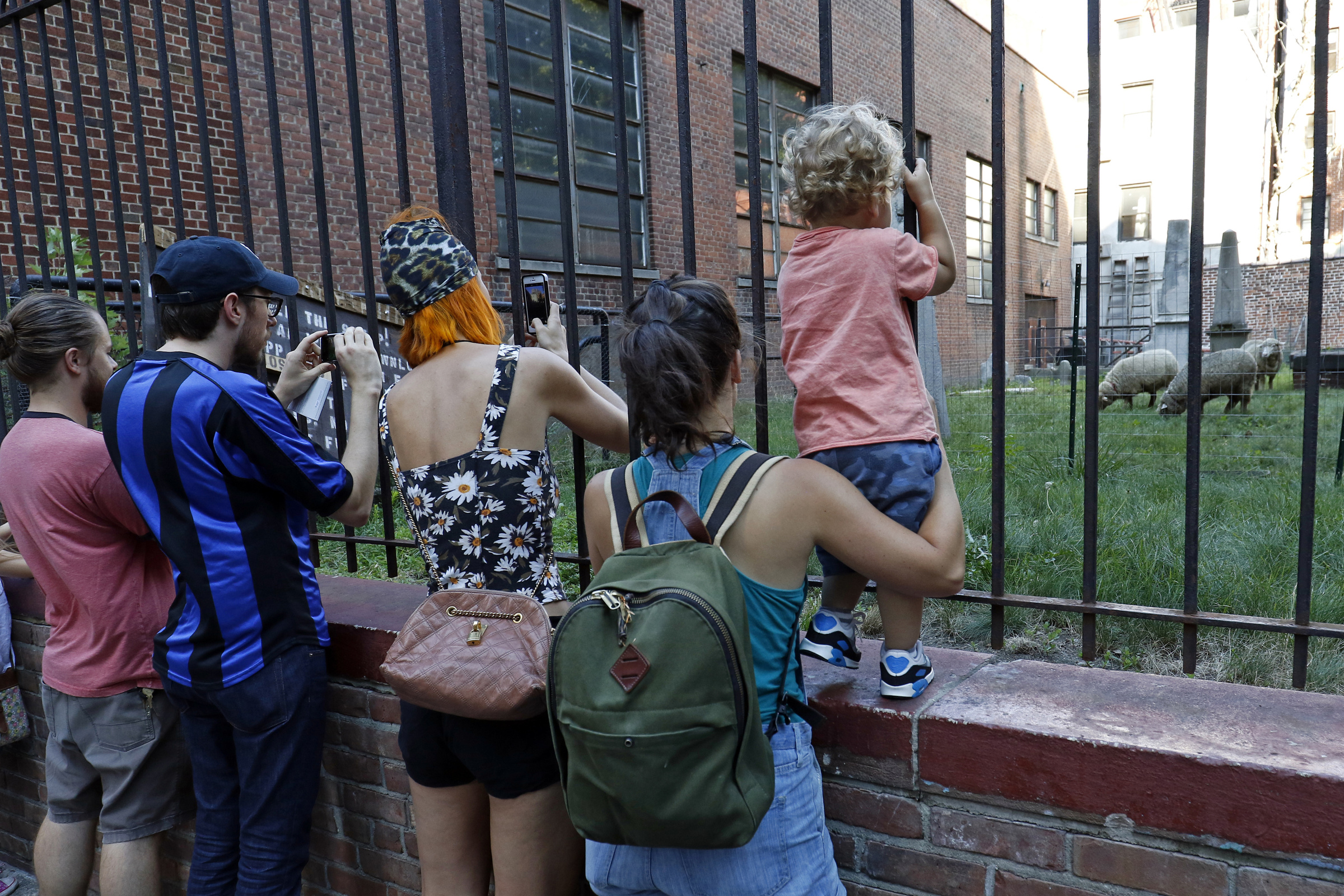 People gather to look at sheep in the cemetery at the Basilica of St. Patrick’s Old Cathedral in New York City Aug. 9. The parish is using three grazing sheep to cut the graveyard’s grass this summer. (CNS photo/Gregory A. Shemitz)

In addition to helping maintain the grounds of the only Catholic cemetery in the borough of Manhattan, the sheep are a “good catechetical tool” for the parish, said Msgr. Sakano.

“It is the most referenced animal in the Bible,” he said, citing several examples, including the use of lambs for animal sacrifice, the ‘Lord is my shepherd’ psalm, and the metaphor of Christ as the lamb of God.

Six parishioners were trained to care for this year’s sheep, which have been named Faith, Hope and Charity. The animals are neutered males — ages 2, 4 and 5, respectively — and weigh an average of 87 pounds. The urban shepherds’ principle responsibility is to coax the rams into a shed at night.

To protect the sheep from intruders, the shed is secured and alarmed while they sleep; the cemetery grounds are under 24/7 video surveillance. The pastor, other parish personnel and the sheep’s owner can monitor the animals via a live feed that can be accessed using their smartphones, tablets and desktop computers.

According to a parish consultant who oversees the sheep’s visit, the cost of maintaining the animals is about $1,000, which covers transportation, city health department certifications, veterinary fees and supplemental food (hay and grain pellets). St. Patrick’s uses the *Spotfund iPhone app (*SohoSheep) to solicit $1, $2 and $3 donations to help offset the expenses. 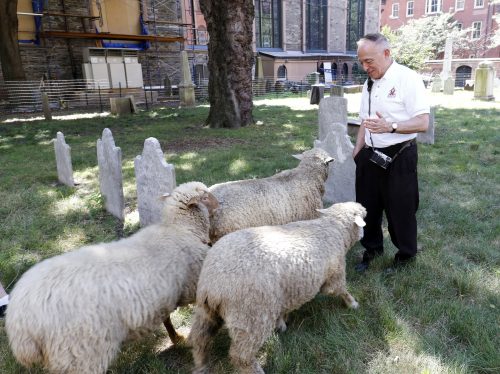 The health department prohibits the sheep from being kept in areas where the general public can be in physical contact with them. Temporary wire fencing prevents the animals from getting near a wrought iron fence that borders one side of the church’s main plaza and part of a sidewalk. Faith, Hope and Charity also are protected on two sides of the cemetery by 8-foot-tall brick walls constructed in the mid-19th century to shield the church from roving mobs fueled by anti-Catholic sentiment.

The sheep are a popular neighborhood attraction, drawing the attention of hundreds of adults and children each day, who stop, stare and snap photos. An innocent bleat will bring smiles to the faces of spectators of all ages.

“People are either consoled or delighted by the sight of the sheep,” Msgr. Sakano said, adding he has not received “one complaint” about the animals’ presence on church property.

On Aug. 23, St. Patrick’s will host a presentation by the sheep’s owner, Paula Kucera of White Barn Farm, who will speak about fiber farming. She will return in mid-September to sell yarn at a booth outside the church during Little Italy’s annual San Gennaro street festival.

Faith, Hope and Charity will be transported back to the farm Oct. 1.

Sean McCluskey, 30, one of the parish’s volunteer shepherds, told CNS that he appreciates the sight of the sheep in the graveyard. “The city can be a pretty lonely and dreary place at times,” he said. “It’s nice to have that sign of life here. It’s a nice juxtaposition.”