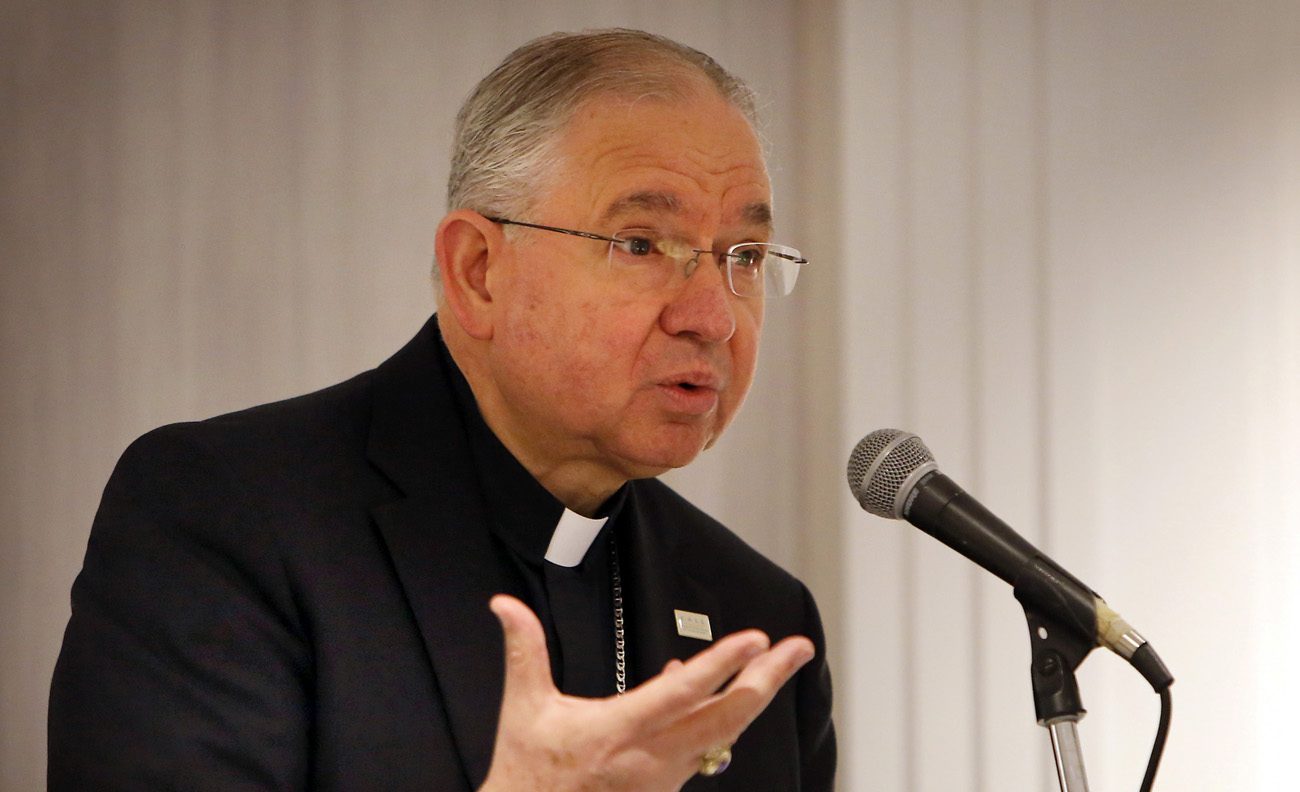 CHICAGO (CNS) — Latino Catholics have many gifts and values to benefit the church and society and the time is now to embrace them and share them.

The organization was founded in 2007. Archbishop Gomez, a native of Mexico, and Archbishop Charles J. Chaput of Philadelphia are its co-founders. The Los Angeles archbishop was an auxiliary bishop in Denver from 2001 to 2004 when Archbishop Chaput headed the Denver Archdiocese.

“I wanted to reach out to the professional Latinos in the business world and the universities, wherever they are, because most of them are traditionally Catholic. They go to high school and they go to college and they lose the contact with the church,” the archbishop said.

The organization helps them feel they are important to the life of the church and helps them bring values common to the Latino community, to the culture, he said.

This was the first year the annual conference was held in the Midwest. The group wanted to highlight Chicago’s strong history of welcoming immigrants from various countries and promoting their cultures.

CALL has over 250 members with chapters in 14 cities. The Chicago chapter began in 2015, said chapter president Jim Palos, who is director of the Hyde Park Institute. In the next year they plan to focus on strengthening families, following the directive of Pope Francis.

“We are a lay organization that is engaging Latino is leadership positions to bring the positive Christian influence of the church to the various areas in which we lead,” he said. “We need to see that CALL experience because the church and the Latino community has so much to offer.”

Mar Munoz-Visoso, executive director of the Secretariat of Cultural Diversity in the Church at the U.S. Conference of Catholic Bishops, expanded on that point in her keynote Aug. 19.

Munoz-Visoso, a native of Spain, drew from Pope Francis’ remarks to immigrants when he visited the United States for the World Meeting of Families in Philadelphia in 2015.

At one point in his remarks at Independence Hall Sept. 25, Pope Francis singled out the large presence of Hispanic immigrants in the United States and those second and third generation Latinos.

“I ask you not to forget that, like those who came here before you, you bring many gifts to your new nation. You should never be ashamed of your traditions. Do not forget the lessons you learned from your elders, which are something you can bring to enrich the life of this American land. I repeat, do not be ashamed of what is part of you, your life blood,” Pope Francis said.

“You are also called to be responsible citizens, and to contribute fruitfully to the life of the communities in which you live,” he continued. “I think in particular of the vibrant faith which so many of you possess, the deep sense of family life and all those other values which you have inherited. By contributing your gifts, you will not only find your place here, you will help to renew society from within.”

The pope implored Latinos — who come from various countries in the Americas — to be aware of their gifts not for vain glory but for service, Munoz-Visoso said.

“If we want to contribute to the common good and help build this society, then it is important to know ourselves and our culture so that we recognize those assets that we have that we can bring to the table,” she said.

What are the assets that Pope Francis is asking Latinos — no matter their country of origin — to embrace? Family Life, faith and values — which are under threat in an increasingly secular American society.

Faith is primarily transmitted in the family with the parish an extension of the domestic church. However, those connections between family and faith have broken down in recent generations, Munoz-Visoso said.

It only takes a generation for young people to distance themselves from the church.

“As studies show, a growing number of our young people are growing up without the faith or with a very superficial sense of it,” she said. “It is a sociological fact that the more assimilated Latinos get into mainstream culture the less Catholic they become.”

Latino Catholics understand family as a set of relationships that extend beyond the nuclear family to grandparents, uncles and aunts, godparents and more.

“Spending time together with loved ones is important, or used to be important,” she said. “Whether we immigrated to the U.S. more recently or our families have been here for generations, the truth is our children are growing up in a highly secularistic and materialistic culture.”

As the pope said in Philadelphia, Latino Catholics can bring these values back to an American society that used to hold them in esteem. To do that, Latinos must embrace and share these values that are native to themselves.

“When you are called to lead in a highly diverse and pluralistic society like the United States of America, it is important to first of all know ourselves,” she said. “We are Latinos, but first of all we are Catholics. And since we are Catholic we are called to carry on and cooperate with the mission of the church. The church exists to evangelize.”

While the U.S. culture today is moving away from organized religion, the Catholic Church here hasn’t seen such a drop off in numbers as a result.

“It’s not because we’re not losing members as well. It’s because of the influx of immigrants. Seventy percent of the growth of the Catholic Church in the United States in the last 30 years has been thanks to immigrants, particularly from Latin America,” Munoz-Visoso said.

“We are remaining steady but if you go to the second and third generation we’re also losing a lot of them. Something needs to be done,” she added.

While in some archdioceses Latinos already account for the majority of Catholics, “we are not producing a proportional number of vocations — ordained, religious or lay,” said Munoz-Visoso. Some of that can be attributed to a time not long ago when Latino men and women were not welcome in some religious houses in America.

Church and society need Latino leaders who are engaged in their faith and in the culture and who can bring the values of faith, family and work as leaven in the culture, she said.

“Our own diversity has prepared us to function and live in a diverse environment,” she said. “We are a very diverse crowd and some of our families have been here from generations.”

She urged her listeners not to be discouraged along the way.

“In the face of growing secularism, keep your faith. Keep your faith traditions,” she said. “Remember that others have walked before us, have made it to heaven and are watching over us.”

PREVIOUS: After 147 years, Little Sisters of the Poor to end ministry in St. Louis

NEXT: Catholic vote remains important, but less predictable than in the past