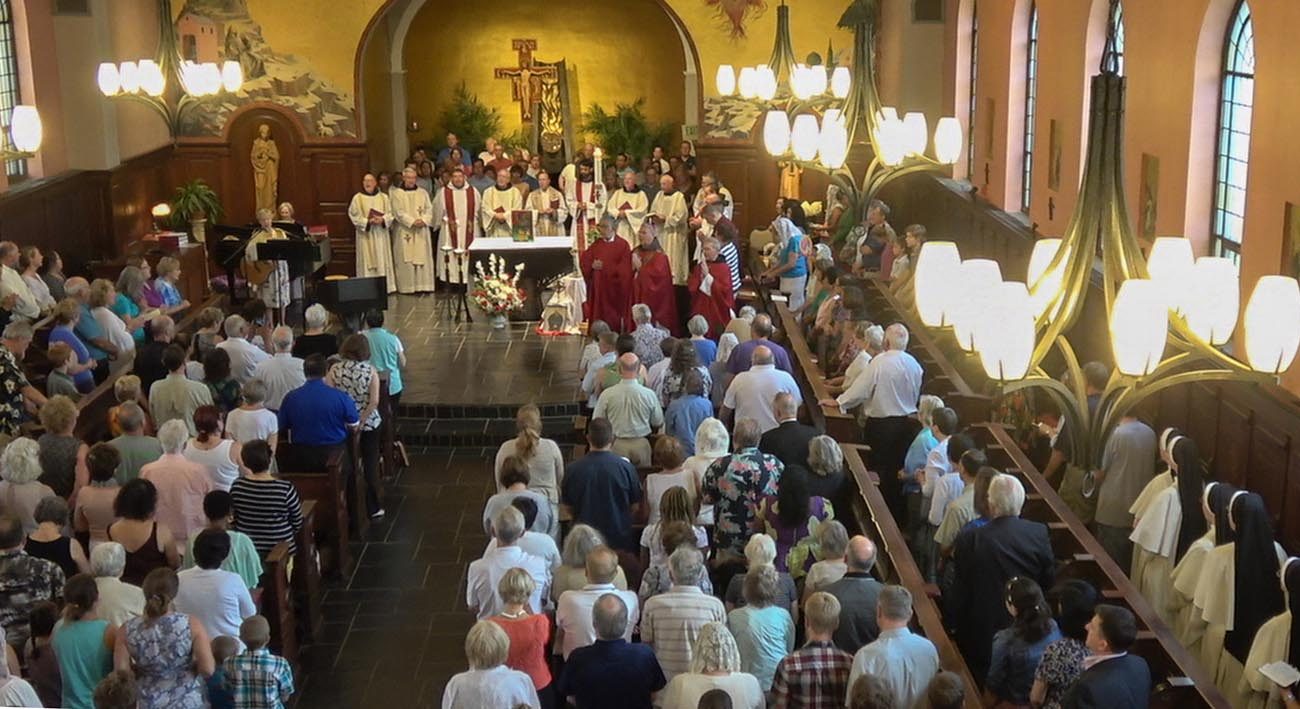 Catholics attend Mass at the Shrine of St. Anthony in Ellicott City, Md., Aug. 14 to mark the 75th anniversary of the martyrdom of St. Maximilian Kolbe. The Mass also marked the end of a pilgrimage of a relic of the saint. (CNS photo/courtesy Father Tom Lavin)

ELLICOTT CITY, Md. (CNS) — Amid the lush, green farmland of Howard County, several hundred worshippers filled the chapel at the Shrine of St. Anthony Aug. 14 to honor a man whose final days were spent starving to death in a crowded, underground bunker.

It was 75 years to the day in 1941 when the man — known as prisoner 16670 at the infamous Auschwitz death camp in Nazi-occupied Poland — received a lethal injection after he spent two weeks without food while comforting and encouraging his nine fellow prisoners before they died.

He would be canonized in 1982 as St. Maximilian Kolbe by St. John Paul II.

Bishop Gregory J. Hartmayer of Savannah, Georgia, recalled the incident in his homily at a special Mass at the shrine, which is in the Baltimore Archdiocese. Like St. Maximilian, the bishop is a Conventual Franciscan.

“As novices,” Bishop Hartmayer said, “we learned about the life of St. Francis of Assisi and the history of the Franciscan order. It was then that I first learned about the courage and the sanctity of Maximilian Kolbe.”

As punishment for a prisoner’s successful escape from the extermination camp where more than a million people were executed, and to dissuade future attempts, the Germans had chosen 10 men to starve to death. Among them was Franciszek Gajowniczek, who is said to have cried out, “My poor wife and children! I will never see them again!”

A prisoner who only several years before had, with his fellow friars, run the largest printing operation in Poland, announced that he would take the anguished family man’s place.

“When they asked him (St. Maximilian Kolbe) to identify himself, he had said, ‘I am a Catholic priest.’ Those words said more about himself than any other words could,” Bishop Hartmayer said.

The Aug. 14 Mass also marked the conclusion of a pilgrimage of a relic of St. Maximilian Kolbe that went throughout Conventual Franciscans’ Our Lady of the Angels Province, which stretches from Ontario in Canada to the eastern United States, from New England to Florida. The province includes Costa Rica and custodies in Brazil, Great Britain and Ireland.

“That is the fullest I ever seen this chapel,” said Father James McCurry, minister provincial, about the standing-room-only gathering.

The eight-month relic tour began at the Ellicott City shrine in January and made several stops in the Archdiocese of Baltimore, including Archbishop Curley High School, where the faculty includes several friars who reside at the shrine.

The tour was the inspiration of Father Jobe Abbass, a fellow Franciscan friar, said Father McCurry during his closing remarks after the 90-minute Mass.

“It really took off,” Father Abbass said, following an outdoor ceremony in front of St. Maximilian’s statue on the grounds. “It’s wonderful and a blessing. You can see it by the participation, the total number of friars and the number of people. I’m really pleased.”

The Mass evoked strong memories for Bishop Hartmayer, who was vested in the Franciscan habit Aug. 14, 1969, at what is now the Shrine of St. Anthony.

“I had never heard of Maximilian Kolbe until I came here for the very first time in August 1969,” Bishop Hartmayer said in his homily.

He added later, “It was a pleasant throwback to 47 years ago, when I took off my black suit jacket and put on the Franciscan habit.”

Bishop Hartmayer said he is hearing the saint’s name more frequently at confirmations in the Savannah Diocese.

“Maximilian is a name I am hearing more and more,” he said. “He is a contemporary saint. I think the students find his example and story very attractive. They see somebody with principles, with honor.”

As the patron saint of prisoners, journalists and the addicted, St. Maximilian offers an example for everyday life, said Father Abbass.

Sometimes, his help is requested for less serious matters as well.

Father McCurry, a Massachusetts native and devoted fan of the Boston Celtics, Red Sox and New England Patriots, planned to call upon his fellow Franciscan before his annual visit to Camden Yards to see the Orioles host the visitors from Boston in a two-game series Aug. 16-17.

“I’ll be praying to my friend, St. Maximilian Kolbe, to intercede for my boys,” he said with a laugh.

Meisel writes for the Catholic Review, the news website and magazine of the Archdiocese of Baltimore.

NEXT: Biden called ‘counter-witness’ to church teaching for presiding at wedding