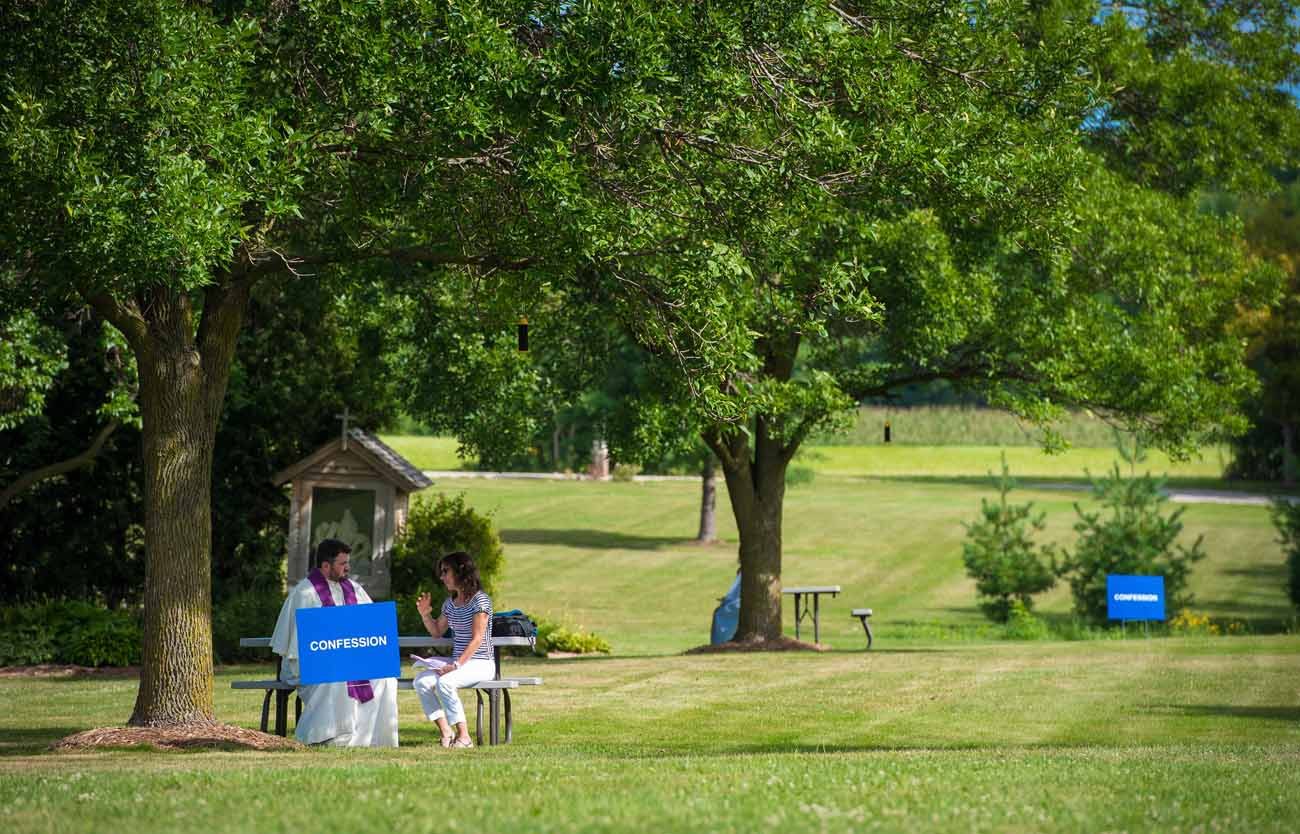 A priest listens to confessions outside of the National Shrine of Our Lady of Good Help in Champion, Wis., Aug. 15. (CNS photo/Sam Lucero, The Compass)

Today, it is the only approved Marian apparition site in the United States. On Aug. 15, the feast of the Assumption, the U.S. bishops formally designated the Shrine of Our Lady of Good Help in Champion as a national shrine.

Bishop David L. Ricken of Green Bay announced its new status at a news conference prior to the annual Mass celebrated at the shrine for the feast day.

More than 1,500 people attended the outdoor Mass, which was followed by the annual rosary procession around the shrine grounds.

Archbishop Jerome E. Listecki of Milwaukee was the main celebrant of the Mass, with Bishop Ricken as homilist. Bishop James P. Powers of Superior and numerous priests of the Diocese of Green Bay were concelebrants.

“I am deeply thankful for the faith, devotion and unwavering commitment to all those who have been stewards and caretakers of the Shrine of Our Lady of Good Help for the past several generations,” Bishop Ricken said during his homily.

“Each of them simply followed the whispers of their own deep faith and in doing so, preserved and advanced the shrine,” he continued. “They carried the inspiring story of Adele Brise, a young Belgian woman to whom the Blessed Mother appeared.

“They carried this message in their own hearts, passing it on from one generation to the next, freely sharing it with all who came seeking, searching and praying.”

On Dec. 8, 2010, Bishop Ricken formally approved the apparition of Our Lady of Good Help to Brise, making the Marian apparitions that occurred some 18 miles northeast of Green Bay the first in the United States to receive approval of a diocesan bishop. His decree came nearly two years after he opened a formal investigation into the apparitions.

At the same time the site also was officially recognized as a diocesan shrine, although for years Catholics in the diocese had already viewed it as such.

The national shrine designation by the U.S. Conference of Catholic Bishops “is a testament and an honor to all those who come before us,” Bishop Ricken said in his homily Aug. 15. “Their generous Christian spirit of warmth, hospitality, reverence and simplicity is very much alive in this holy place.”

According to canon law, “The term ‘shrine’ signifies a church or other sacred place to which the faithful make pilgrimages for a particular pious reason with the approval of the local ordinary.”

On April 30, 2015, Bishop Ricken sent a request to the USCCB and its Committee on Divine Worship asking that they consider the Champion site as a potential national shrine. Bishop Ricken noted that the “mission of prayer and catechesis is at the very heart of the apostolate of this sacred shrine.”

Since 1992, the U.S. bishops have followed a set of approved norms to designate local shrines as national shrines.

Father Michael Flynn, executive director of the USCCB Secretariat for Divine Worship, said that while exact numbers are not known, there are about 70 national shrines in the United States.

To be granted such a designation, a shrine must meet several requirements, including:

— Has served as a diocesan shrine and place of pilgrimage for at least 10 years.

— Operates under statutes approved by the diocesan bishop.

— Is easily accessible, with appropriate facilities for pilgrims.

— Is dedicated to promoting the faith of the pilgrims by centering on a mystery of the Catholic faith, a devotion based on authentic church tradition, on revelations recognized by the church or on the lives of those in the church’s calendar of saints.

A national shrine also must nourish the spiritual lives of pilgrims by offering celebrations of the liturgy, and develop and utilize some form of common prayer, such as the Liturgy of the Hours. It also needs to have enough liturgical ministers to provide adequate pastoral care for pilgrims, especially for various language groups, and provide sacramental celebrations in various languages.

The shrine also must have a rector. In the case of the Shrine of Our Lady of Good Help, the rector is

Father John Broussard, a member of the Congregation of the Fathers of Mercy. Beginning in July 2011, Bishop Ricken had asked the Fathers of Mercy to care for the shrine. Father Peter Strycker was the first rector, serving from 2011 until this past July.

Finally, a shrine cannot serve as a local parish, so ordinarily, baptisms, weddings and funerals cannot be held there. And, once approved as a national shrine, its formal statutes must be reviewed by the U.S. bishops’ conference every 10 years.

Kasten is associate editor of The Compass, newspaper of the Diocese of Green Bay.