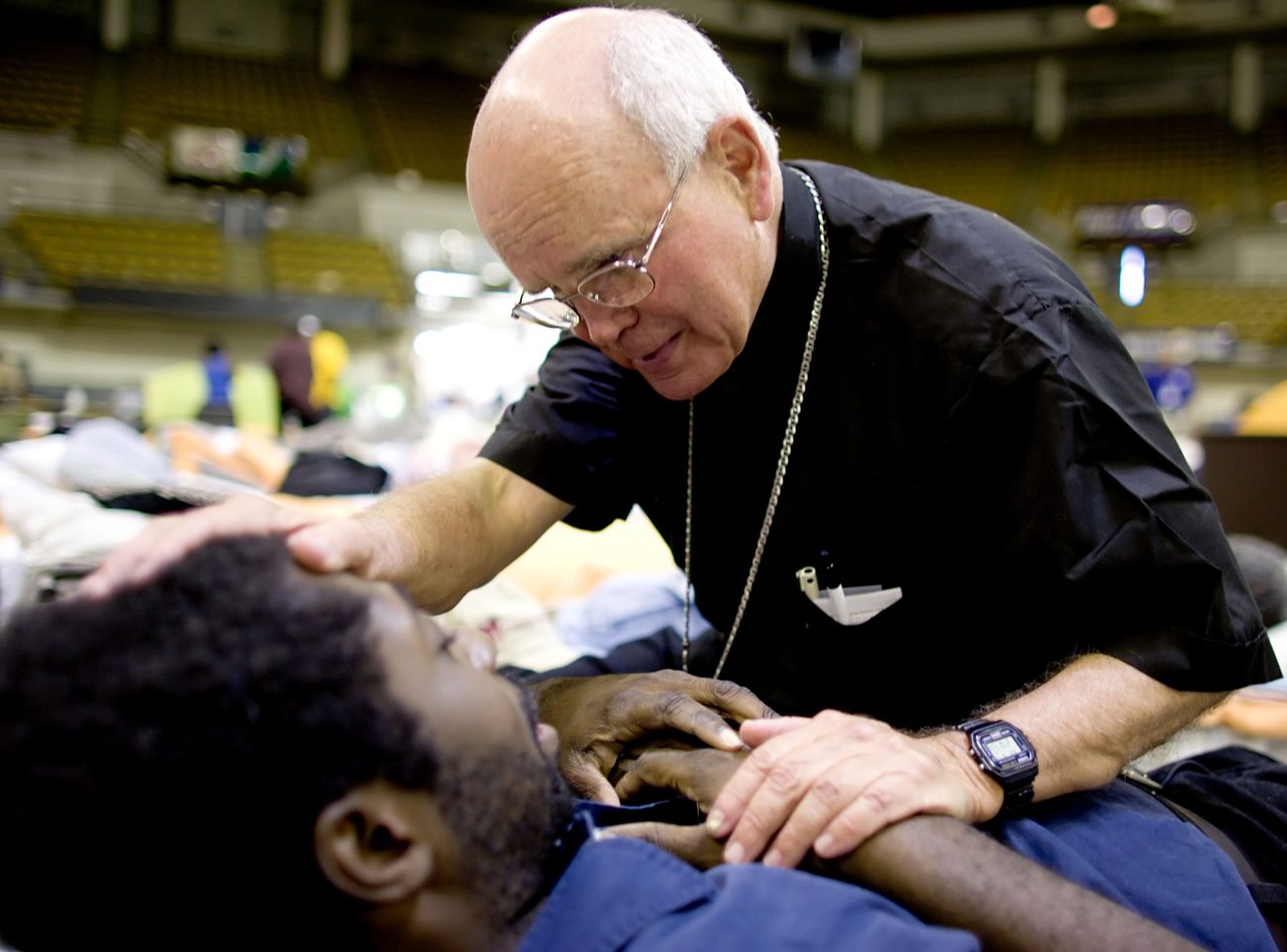 WASHINGTON (CNS) — To help before tragedy occurs, a Washington-based priest and psychologist is conducting a free webinar at the end of August to prepare priests, religious and other church members to deal with the trauma that follows a natural disaster, an act of terrorism or any other large-scale tragedy that they and the communities they serve might face.

“Just because you’re a priest or a (religious) sister or a brother does not mean you have the training to deal with these large-scale disasters,” said Msgr. Stephen Rossetti. He’s conducting the free Aug. 31 online webinar “Shepherding in Tragic Times: Caring for Self and Others in Trauma” via St. Luke Institute in Maryland.

Msgr. Rossetti, a licensed psychologist, first dealt with large-scale tragedies after Hurricane Katrina hit the Gulf Coast in 2005 and he was dispatched to help priests in Biloxi, Mississippi.

Since then, Msgr. Rossetti, past president of St. Luke Institute, has seen a way to apply lessons he learned in Biloxi to other experiences that bring about mass pain and trauma that may affect parishes and their communities. He will discuss some of these during the webinar aimed at priests and religious, but available to anyone who wants to register at www.sliconnect.org.

In September 2015, Msgr. Rossetti took some of those lessons to a training for priests in Florida, which Father Miguel Gonzalez, pastor of St. John Vianney Catholic Church and vicar for priests for the Diocese of Orlando, attended.

“Thank God for the timing” of the presentation, said Father Gonzalez, who received an urgent phone call in June to help with Spanish-speaking families after a nightclub shooting in Orlando left 49 dead and more than 50 injured.

Because of the training, he had prepared himself mentally and spiritually for the chaos, the media swarm, the depth of the grief he witnessed, and even his reaction. He knew that instead of finding the right words, it was more important to be near those waiting to be told whether their relatives were alive, to let them know they weren’t alone.

He knew small gestures, such as fetching water for those who were in shock and grief, were important, and to allow those who were suffering to question God and be angry. He even knew he had to find moments to “decompress” and take a step back from the situation so that he could continue helping.

“What I learned (from the training) definitely clicked,” he said. “We were in a better place to meet needs but not disconnect from our needs,” Father Gonzalez said during a phone interview with Catholic News Service.

Preparing for tragedy begins by recognizing that it can happen anywhere at any time, Msgr. Rossetti said.

“It’d be foolish for us to think that it’s not going to happen to us. Look at the number of dioceses (in the U.S.) in the last year that have been directly affected by terrorism and tragedies. I think every diocese, every order, should have, not only training, but also a plan,” Msgr. Rossetti said.

Each diocese should ask the question: “What are we going to do if downtown in our city a hundred people are shot and killed? Who’s going to do what?” Msgr. Rossetti said.

Priests and religious need to know how to spot people dealing with post-traumatic stress disorder and other conditions. Some of these situations may mean dealing with people’s anger and frustration, terror and sometimes faith.

“We need to encourage people to go through that faith journey,” Msgr. Rossetti said. “If you need to get angry at God, if you need to question why, then do that. Bring it to prayer.”

In the midst of tragedy, questioning one’s faith can happen to anyone, he said, adding that “it happens to priests as well … it can really strongly affect your faith, and getting angry at God, questioning God’s providence, all those things” are normal.

Father Gonzalez said it helped to hear what to expect from those who had been through it, such as Msgr. Robert Weiss of Newtown, Connecticut, who shared the experience of dealing with tragedy after he had to tell families their children had been shot and killed at Sandy Hook Elementary. Sadly, it has become necessary to understand mass tragedy “in light of the things we’re witnessing in the world,” Father Gonzalez said.

“People understand natural disasters, hurricanes, floods, that sort of thing, but when it’s done by people intentionally, it carries an extra level of terror,” Msgr. Rossetti said. “You’re being faced with such evil, a devastating evil, it leaves a mark on people.”

Believers, he said, have to be strong in faith and “not respond with vengeance, not respond with hatred because that’s what makes us precisely like them. If you want to talk about it in terms of good and evil, this is what the devil tries to do: tries to make us like himself — full of rage, hatred.”

We can instead study and prepare the truly Christian response, Msgr. Rossetti said. Faith leaders can consider, for example, the response of those in Charleston, South Carolina. When a shooter killed nine of their members during a prayer service at Emanuel African Methodist Episcopal Church in 2015, family members of those killed showed up to the killer’s bond hearing to forgive him and tell him they were praying for his soul.

“They said, ‘We forgive you,’ even though they were devastated, those wonderful people of faith,” said Msgr. Rossetti. “They defeated evil by the power of goodness.”

Unfortunately, there’s no reason to think that these tragedies will stop, said Msgr. Rossetti.

“We have every reason to think that it’s going to get worse. So, let’s get prepared,” he added.

NEXT: Devil’s in the details: Satan clubs seek OK for school groups