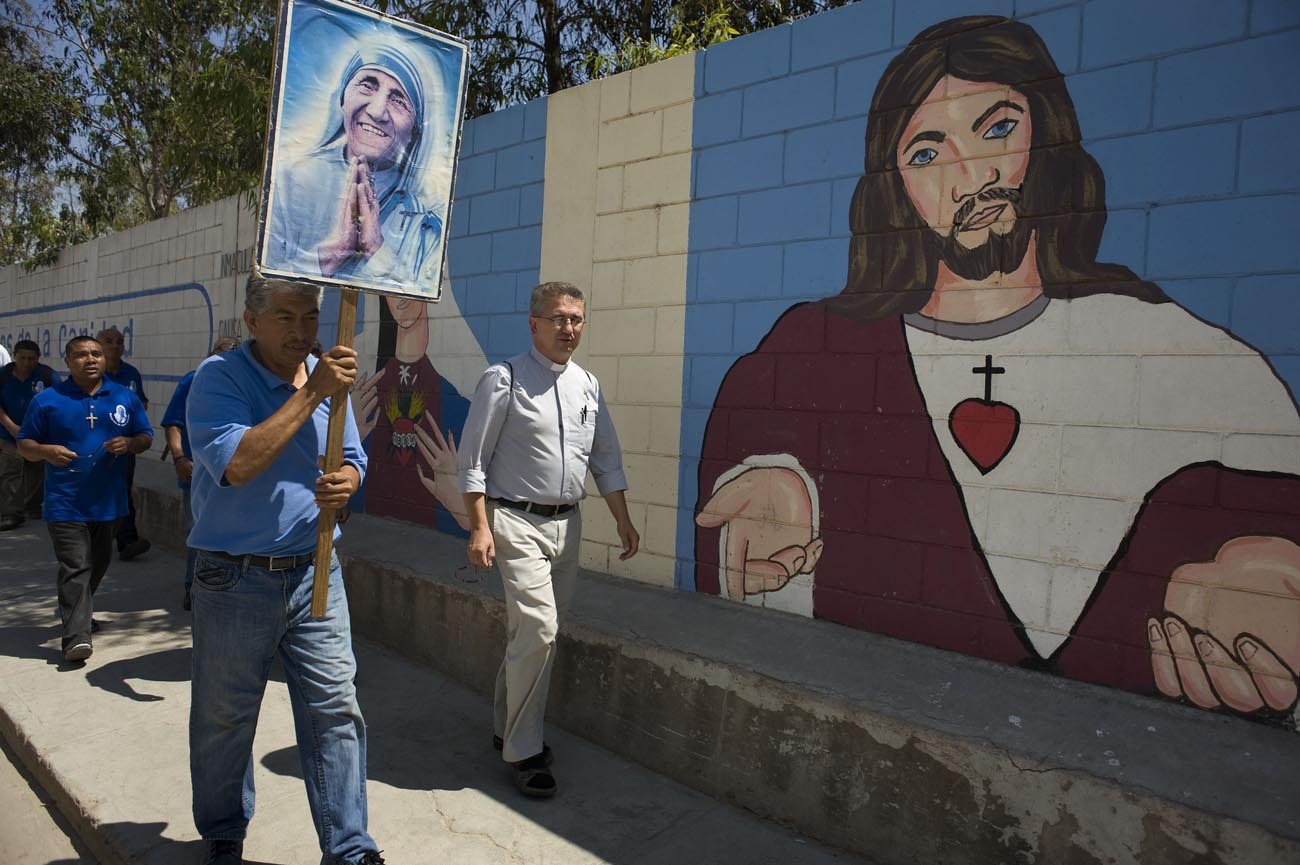 Father Zbigniew Szczotka, a member of the Missionaries of Charity Fathers, center, accompanies a group of men at the sanctuary of Blessed Teresa of Kolkata, as they begin a short walk to invite people to Mass Aug. 21 in Tijuana, Mexico. They are part of a group doing spiritual and community service with the Missionaries of Charity. Mother Teresa will be canonized Sept. 4 at the Vatican. (CNS photo/David Maung)

TIJUANA, Mexico (CNS) — The men trudged down the dusty road of an impoverished Tijuana neighborhood. The Sunday morning air was already arid and hot, but the small group was on a mission: They were heading to a tiny neighborhood community center, bearing lemonade, food and prayers for the local families.

The men are members of the Missionaries of Charity Fathers, founded by Blessed Teresa of Kolkata. The Fathers’ generalate house has been in Tijuana since 1988.

As preparations for Mother Teresa’s Sept. 4 canonization continue, priests and volunteers carry out her work in Tijuana’s most ragged and forgotten corners: in its makeshift plywood towns built over dirt roads with sewage trickling through them; among its addicts and deportees; and among those living amid trash and desolation.

“Here, there are not many changes,” said Father Zbigniew Szczotka, indicating the dusty roads as he and his crew drove through the neighborhood, dodging roosters, puppies and children. Father Szczotka, known locally as “Father Zibi,” first came to Tijuana in 1989 and has watched it grow and change since. Only the poorest areas remain the same.

The Missionaries of Charity not only hold Masses and teach religion; they also operate a soup kitchen, tend to the ill, and help the poorest of the poor in other spiritual and material ways.

In Tijuana, continuing Mother Teresa’s legacy often means taking in and helping people who have been deported from the United States, who are physically separated from their friends and families by border laws and stranded with no support network. Some of them even join, offering their services and donning the blue T-shirts emblazoned with a picture of Mother Teresa.

“We pray about this,” said Leonardo Guerrero, 36, a volunteer with the Missionaries of Charity and who was deported from the United States about two years earlier. “This community of Catholics, they emphasize people that are immigrants, that have gotten deported … they emphasize that they need help.”

He credits the group with enormous positive changes in his life. The onetime addict has given up drugs and is now getting his tattoos removed. He also said that he plans to stay in Mexico to do what he can to help.

“If I go back, I’m going to be labeled as an illegal immigrant, and I don’t want that anymore,” Guerrero said. “I just want to try to live life as a law-abiding citizen and try to make the best of it. I’ve had a lot of jobs here, and throughout all of it there’s prejudice, they look at me differently…

“Now that I’m here with the disciples of Christ … you have to put your feelings a little bit to the side. Now that I’m going back to my roots, my religious ways, I want to do things in a spiritual sense. Let God do his divine work.”

The Tijuana Missionaries of Charity Fathers helped make the case for Mother Teresa’s canonization. Father Brian Kolodiejchuk, who divides his time between Tijuana and Rome, is currently in Rome for the ceremony. He has been preparing evidence of her sainthood for 17 years.

Meanwhile, her work quietly continues in the places that the rest of the world forgot.

NEXT: Garden program source of food, comfort for refugees settling in Kentucky