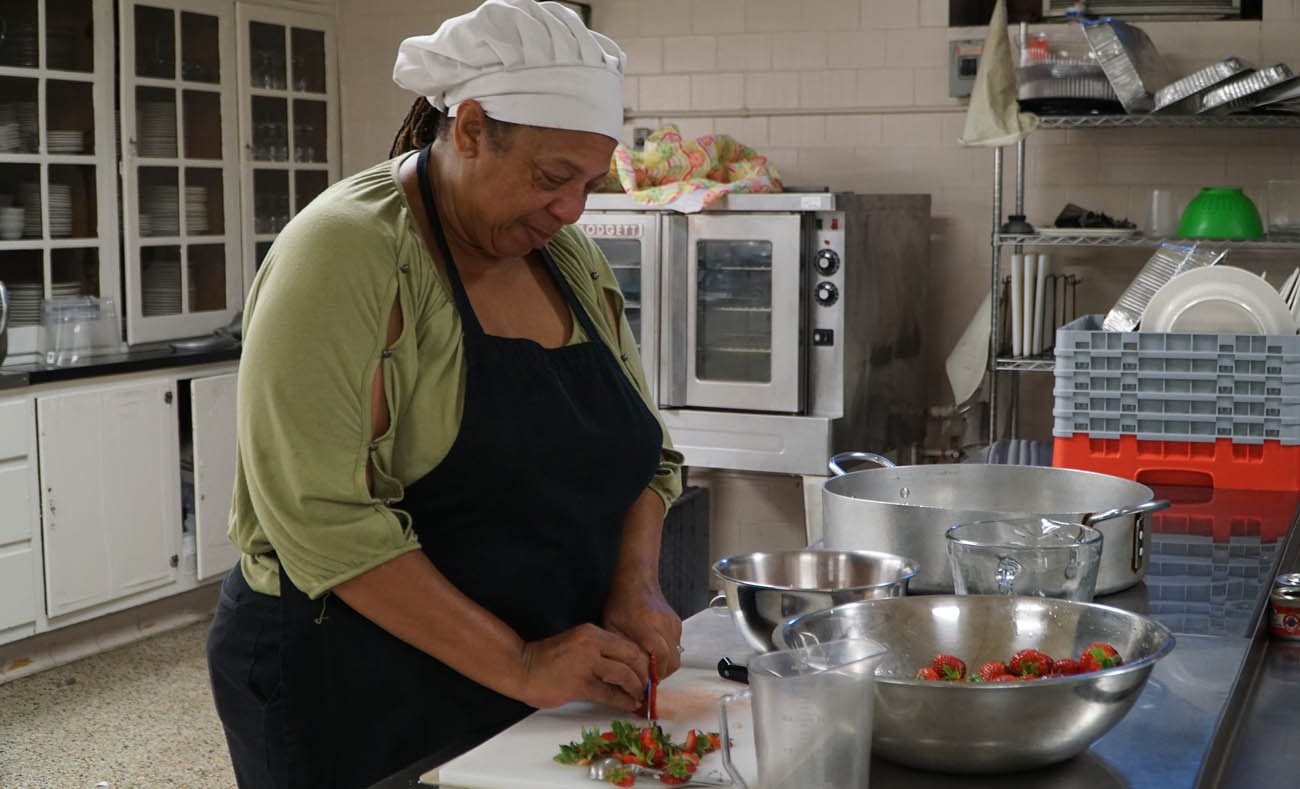 Tracy Malone, a student in Catholic Charities of Louisville's Common Table Culinary Arts program, slices strawberries for a shortcake to be served Aug. 23 at the Garden Cafe. The cafe serves lunch to the public on Tuesdays and Thursdays. (CNS photo/Ruby Thomas, The Record)

LOUISVILLE, Ky. (CNS) — After a long and tiring journey to get to their new home, many refugees being resettled by Catholic Charities of Louisville are finding hot meals waiting upon their arrival.

The meals are prepared by students in Catholic Charities’ Common Table Culinary Arts program and delivered by social workers who help coordinate the resettlement of refugees.

The Ready to Eat Meals is the newest service offered by the program, which provides culinary skills training to refugees as well as unemployed and underemployed people.

The Common Table, which started about a year ago, “really helps students find a sense of empowerment and gives them the opportunity to take control of their financial situation and achieve self-sufficiency for their family,” said Laura Stevens, who heads the program.

Students use fresh produce from the community garden program, which has nine locations around greater Louisville. The gardens encompass nearly 360 plots worked by 200 growers, most of whom are refugees, Stevens said.

Catholic Charities also runs the Garden Cafe. Located in the basement of one of its offices, the cafe serves lunch Tuesdays and Thursdays. Its menu offers a variety of selections — from typical American fare to ethnic favorites.

The catering program has so far provided breakfast and lunch for office meetings and hot meals for fundraising events.

Both have been a success, in Stevens’ estimation. Together, they have generated $15,000 in its first six months of operation, according to a Catholic Charities report.

Stevens said the Common Table is a social enterprise. Its goal is to become self-sustaining after its second year. Stevens aims for it to generate enough revenue after its third year to sustain the Common Earth garden program.

The idea for the culinary arts program started taking shape when a fully equipped commercial kitchen in the basement of the Catholic Charities office on West Market Street was no longer being used by the Dare to Care Kids Cafe.

The vacancy in the kitchen, coupled with the need to train newly arrived refugees “who have little to no marketable job skills,” led to the development of the program, Stevens said.

Over the course of eight weeks, Common Table chef Hank Levitt teaches students about food and kitchen safety and sanitation, food preparation and the basics of cooking. Stevens and Levitt also teach students how to prepare a resume and what they call “soft job skills,” such as how to call in sick and the importance of arriving on time.

Refugee students also learn how to operate a cash register and give change in United States currency. Students who complete the program receive the ServSafe food handlers permit that is needed to work in the food industry.

With a shortage of restaurant employees in Louisville, employers have responded positively to the training program, Stevens said.

Eighteen students have graduated from the culinary program and found employment at local companies, such as the Brown-Forman Corp., Mussel and Burger Bar and Queen of Sheeba Restaurant.

She also explained that the program helps to build leadership skills in some of the refugee women who had no previous working experience. Each student has the opportunity to lead the class in choosing and preparing the lunch menu for a day.

Many choose to share recipes from their homelands, Stevens said, helping the women realize they can teach others about themselves and their experiences.

Thomas is a staff writer for The Record, newspaper of the Archdiocese of Louisville, Kentucky.