At Lebanon camp, seeing the face of God in the disabled 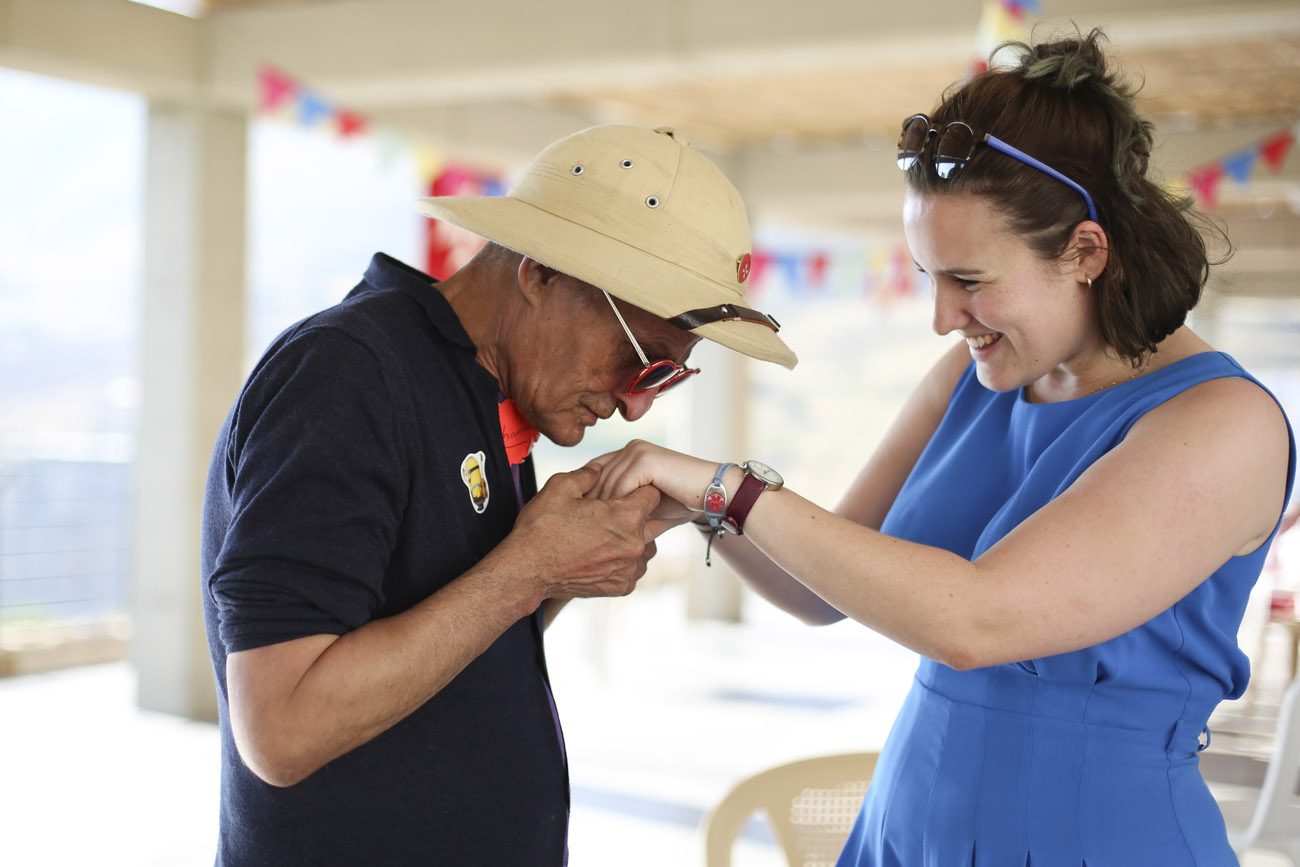 CHABROUH, Lebanon (CNS) — In a pristine mountain setting in Lebanon, a female volunteer gently takes hold of the hands of Mohammed, a disabled adult who has trouble communicating. She gazes into his eyes — still shaded in heart-shaped sunglasses from the dress-up activity a few hours earlier — as she engages him in a dance to the rhythm of the music playing in the background.

Smiling contentedly, Mohammed bows his head to kiss her hand, and she responds with a kiss on his forehead.

“By showing acts of love, we are demonstrating that everyone is made in the image and likeness of God,” Anton Depiro, a 30-year-old Catholic volunteer from London, told Catholic News Service during a recent camp for people with disabilities, run by the Order of Malta Lebanon.

As Depiro affectionately put his arm around Mohammed, he introduced his middle-aged guest like a proud brother, saying, “He’s very shy and quiet.” He told CNS they were “working together slowly and getting to know each other, and we’re finding ways we can interact.”

The issue of disability is still somewhat of a taboo in Lebanon, and families often experience shame when they have a child with a disability. Because the Lebanese government does not offer support for people with disabilities, many families resort to putting their family member into an institution, where there is little connection with the outside world.

The Order of Malta Lebanon addresses this inadequacy by bringing together disabled people from institutional settings and volunteers to spend a week together at its center in Chabrouh for a camp. Each disabled “guest” is paired with a volunteer for complete care and attention.

One of the aims of the Order of Malta Lebanon camp is to give guests “the love and respect they deserve and to give them back their humanity,” Patrick Jabre, project director for the Chabrouh camp, told Catholic News Service. Jabre was among the first volunteers when the organization hosted its first camp there in 1997.

Depiro said volunteering with the guests can be challenging, for example, waking them to wash and get dressed for the day. 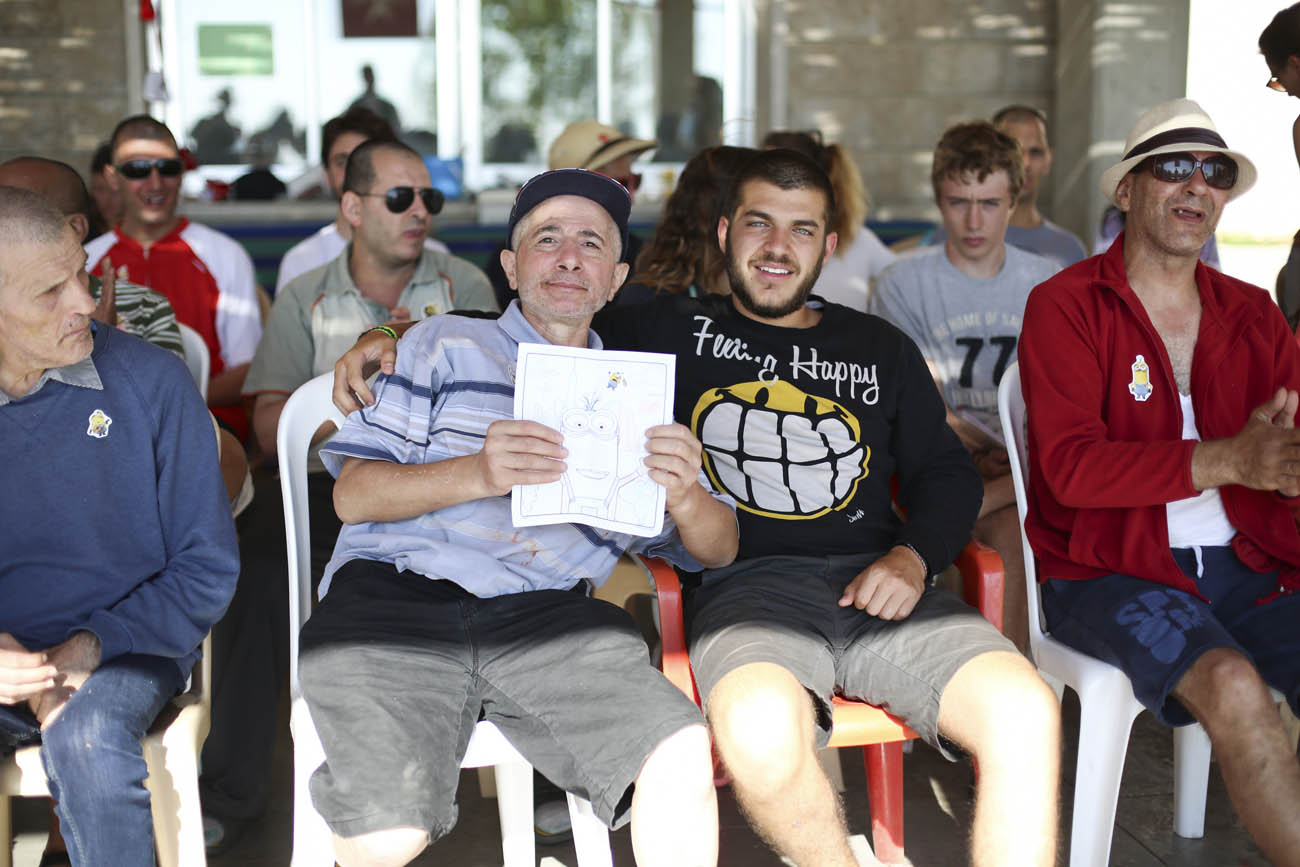 “But it’s simply about sharing love with our brothers and sisters. After a while, you find the guest starts to look after you,” he said.

The motto at Chabrouh is, “Our guests are our lords, and we are here to serve them.”

So, if a guest signals to the volunteer a desire not to participate in the group activity in progress, the pair might instead play a quiet game, or just sit together and hold hands while taking in the spectacular views from the camp. Chabrouh, which is near Faraya, a popular skiing destination, is 6,200 feet above sea level.

Camp activities include hiking, olive picking, theatre plays, “Olympic” games as well as an outing to the beach.

Jack Straker, 25, a Catholic volunteer from England, said his guest, Charbel, who is mute, “has ups and downs all day.” Middle-aged Charbel sometimes makes sounds of approval or disapproval. That morning, Charbel especially enjoyed washing up.

“Charbel likes to receive kisses. He goes up to people and presents his cheek,” Straker added.

“To see the face of God in the face of the guest helps to renew a lot of people’s faith,” Straker said, referring to the Chabrouh camp experience as a “silent evangelization.”

Each day begins and ends with a group prayer. Mass is celebrated most days, and confession and the anointing of the sick are available.

Melkite Father Romanos Bou Assi, director of the center, said the daily schedule “is always engulfed in the grace of the Lord.”

Although the volunteers come from different paths and an active Christian spiritual life is not a prerequisite, the camp experience encourages them to “think deeply about the meaning of their lives,” Father Bou Assi told CNS. Such reflection, while working closely with the disabled, the priest explained, also can help the volunteers to understand “the things that sometimes cripple us in life” and the importance of having a relationship with God.

Chabrouh underwent an extensive renovation and expansion, whereby two buildings were joined and a new building added in time for the 2016 camps. Cardinal Bechara Rai, Maronite Catholic patriarch, will consecrate the center Sept. 3.

This year’s schedule at Chabrouh included Order of Malta volunteers from four European countries as well as from Lebanon for 18 separate weeklong camps, including two at Christmastime. In all, about 650 volunteers and 500 guests — 15-20 percent of whom are Muslim — will participate. The organization also hopes to receive delegations from North and South and America for future camps.

After each camp, volunteers with the Order of Malta Lebanon visit the former guests where they reside.

The order also sponsors a course for college students, who spend 10 months in Lebanon learning about the region, faith and coexistence, while working daily with the disabled in institutions across the country.

Marwan Sehnaoui, president of the Order of Malta Lebanon, fondly refers to the Chabrouh camp as “a little family” and a “house to learn how to love.”

“When you look around you and see the state of the world, you understand that something is missing,” Sehnaoui told CNS, citing murder, suicide and bloodshed rampant in the world today. “So we decided that the spirituality of this house is to teach how to love. Because a world without love cannot work.”

Sehnaoui stressed that the experience of the camp instills in volunteers a hope that “together, they can join hands for a better world through loving the disabled.” At the same time, the guest also discovers a capacity to love.

“Christ resides in these suffering people, and Christ, through these disabled people, is an instrument of peace and coexistence,” Sehnaoui said, adding that in Lebanon, “all this is being done on a holy land.”

PREVIOUS: Pope: Jesus’ compassion is a call to service, not a vague sentiment