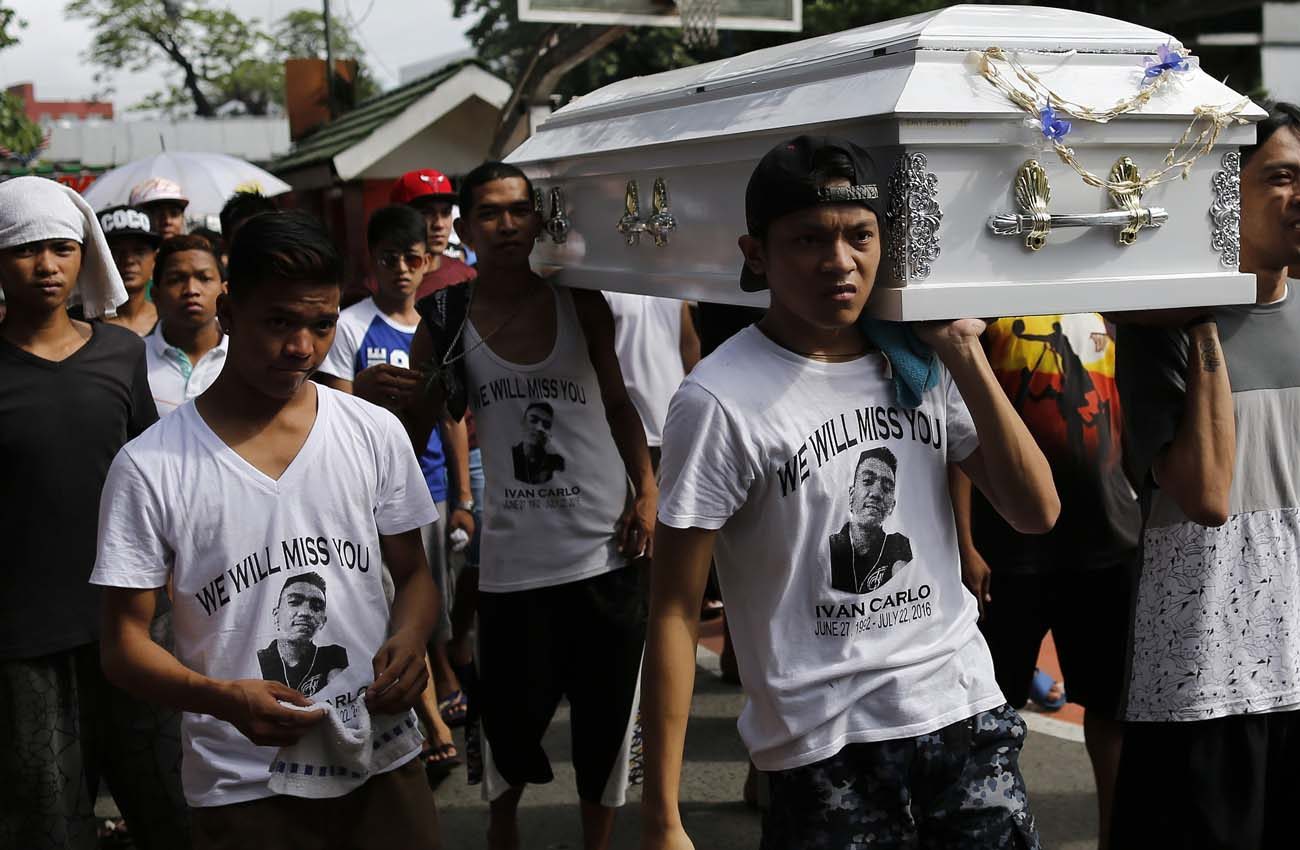 Filipinos carry the coffin of an alleged drug dealer at Manila North Cemetery Aug. 7. Catholic leaders say they are powerless to stop a growing number of extrajudicial killings in the Philippines that have come with Duterte's war on drugs. (CNS photo/Francis R. Malasig, EPA)

MANILA, Philippines (CNS) — Philippine Catholic leaders say they are powerless to stop a growing number of extrajudicial killings that have come with President Rodrigo Duterte’s war on drugs.

“What I predicted is happening, and the church is powerless to stop the killings,” Redemptorist Father Amado Picardal, head of the Philippine bishops’ Commission for Basic Ecclesial Communities, told ucanews.com. He said the killings are “already unstoppable,” adding that some church leaders are losing hope.

Father Picardal, who has linked the president to a death squad allegedly responsible for the killings of more than 1,400 people, warned of “dark prospects” for the Philippines following Duterte’s election in May.

During his campaign for the presidency, Duterte vowed to stop criminality, especially the illegal drugs trade, and corruption in the first six months of his term, warning that his administration would be a “bloody” one. Ucanews.com reported estimates of more than 600 people killed since Duterte was elected in May; 211 of those were murdered by unidentified gunmen.

Archbishop Socrates Villegas of Lingayen-Dagupan, president of the bishops’ conference, appealed to Filipinos’ sense of humanity amid the killings. He said he was “in utter disbelief,” adding that the killings “are too much to swallow.”

“There is a little voice of humanity in us that I believe is disturbed by the killings,” the archbishop said in a statement read in churches in his archdiocese in early August. He said the “voice of disturbed humanity is drowned out by the louder voice of revenge or silenced by the sweet privileges of political clout.”

“In our dream to wipe out drug addiction, are we not becoming a ‘killing fields’ nation?” he asked.

“I don’t have to be a bishop to say this. I do not have to be a Catholic to be disturbed by the killings that jar us every time we hear or watch or read the news,” Archbishop Villegas said.

“From a generation of drug addicts, shall we become a generation of street murderers? (Can) the do-it-yourself justice system assure us of a safer and better future?” he said.

After three drug suspects were found murdered in the city of Tacloban in early August, Father Virgilio Canete of Palo Archdiocese said the killings are “out of control.”

The victims, two of them women, were shot several times. A crude sign that said “I am a pusher, Lord I am sorry” was placed next to the bodies.

On Aug. 3, six people linked to a drug syndicate were killed in a police operation in the small town of Albuera in Leyte province.

“Only the police and the president can stop the killings by declaring a moratorium,” said Father Canete.

“The church cannot do anything now,” said the priest. “It had already warned of the consequences. Only those who started these bloodbaths can stop it.”