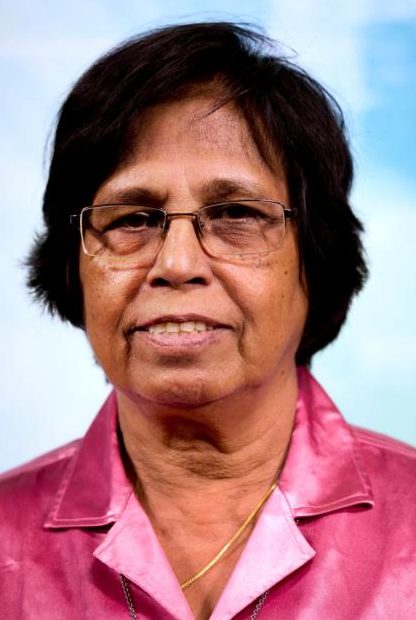 WASHINGTON (CNS) — Rosaline Costa heard people tell her “be careful” so often she decided that she had to flee her native Bangladesh for the United States to stay alive.

Costa, 67, a Catholic, has been the editor of Hotline Bangladesh for 30 years. The monthly newsletter chronicles corruption, crime, terror and religious violence in the nation, which borders India to the east.

But now Costa is in New York City, figuring out how she can get Hotline Bangladesh published nearly half a world away.

Costa left Bangladesh in July. She has been staying with two nephews and a niece, each of whom left Bangladesh themselves a year ago after they had been harassed and threatened.

The niece’s Muslim uncle was trying to force her into marrying him, Costa told Catholic News Service Aug. 9 during a visit to Washington. One nephew was taken to a mosque and told to convert to Islam under fear of death.

The other nephew, a promising art student, was followed by Muslims and told to convert — and then to join their number so he could help similarly “recruit” others. “After that, I did not allow him to go to the university anymore for classes,” Costa said.

What happened to her kin, according to Costa, is a microcosm of what is happening to Christians throughout the country, as the police and judicial system are either too weak to deter such criminality or indifferent to it.

Religious violence has spiked in Bangladesh in recent years. In May, an Italian priest was shot in Dhaka, the capital. Earlier this year, the U.S. Commission on International Religious Freedom included Bangladesh among the countries it is monitoring, although Bangladesh did not make the list of the worst nations, or even the commission’s “Tier 2” group of bad actors.

“I made several editorials in the newsletter” decrying the upsurge in religious violence, Costa said. “In the last two-and-a-half months I could not go out of the house.”

It got to the point where, to get to her office, she had to enter her car next to her house, drive it to a garage connected to the Hotline Bangladesh office, and repeat the process in reverse to get back home.

She told of a woman who had been “chopped” — attacked with a knife — and “beaten very badly. But she would not let me visit her in the hospital. She did not want to be identified. Second, she feared for my safety.”

Costa said she had been subject to harassing phone calls. “I went to the police and they did not want to take a report,” she told CNS. She said she countered by going to a different police station where she knew an officer and was able to file a report there. Afterward, though, “I got calls from anonymous people with anonymous threats, Costa said; she believes someone had leaked her complaint to the people who had been harassing her.

Although she has spent 30 years leading a crusade for ethics, fairness and tolerance in Bangladeshi society, journalism has not been the sole focus of Costa’s life.

In 1994, she organized women at a garment factory into a labor union. Although she said she ended her involvement once the union was in place, “I was a target of the factory owner,” but was “saved” thanks to the intervention of a Bangladeshi labor federation with ties to the AFL-CIO in the United States.

Costa also worked in the 1990s to better the lives of poor children in Bangladesh. The work won her awards in Nepal and South Korea. “It’s very hard for a woman to receive recognition” in Bangladesh, she explained, although she did receive honors from a Muslim organization in the country as well as a Hindu-Buddhist-Christian unity council there.

During her time in the United States, Costa has already met with a representative of the U.S. State Department, whom she said told her he would help her find work in the country.

Asked if she thought she might never be able to return to her country, Costa sighed and replied, “I don’t want to go back” under the current state of affairs.

NEXT: U.N. Refugee Olympic team: ‘The victory scream of all refugees’