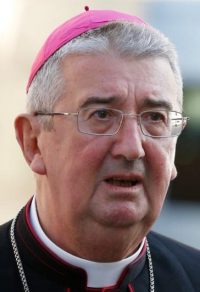 DUBLIN (CNS) — The trustees of Ireland’s national seminary have agreed to bring in a specific policy to protect whistleblowers after serious allegations were made about life in the college.

The Aug. 23 announcement also followed a decision by Dublin Archbishop Diarmuid Martin to pull his students from St. Patrick’s College, Maynooth, after publicly raising misgivings about the life and governance of the 221-year old institution.

The archbishop referred to claims of what he described as a “gay culture” in the seminary and further allegations that some seminarians have been using a gay dating app. Archbishop Martin said some of the allegations had been shown to be true.

The seminary trustees — 13 senior Irish bishops, including Archbishop Martin — said in a statement that “there is no place in a seminary community for any sort of behavior or attitude which contradicts the teaching and example of Jesus Christ.”

The statement said the trustees “share the concerns about the unhealthy atmosphere created by anonymous accusations, together with some social media comments which can be speculative or even malicious.”

The trustees agreed to “review current policies and procedures for reporting complaints with a view to adopting best practice procedures for ‘protected disclosures’ (whistle-blowing).”

They said they would ask the Irish bishops’ conference to conduct an independent audit and report of governance and statutes in the three Irish seminaries: Maynooth, the Pontifical Irish College in Rome and St. Malachy’s College in Belfast, Northern Ireland. They also agreed to reassess future personnel and resource needs for the seminary.

The statement said “the trustees accept their responsibility for ensuring that the national seminary adheres to best practice in all areas of training for priesthood and that college staff are trained to the highest level in accordance with requisite professional standards and the requirements of the Holy See.”

Archbishop Martin first raised concerns publicly in early August when he said “there seems to an atmosphere of strange goings-on there (Maynooth); it seems like a quarrelsome place with anonymous letters being sent around.

“There are people saying that anyone who tries to go to the authorities with an allegation are being dismissed from the seminary,” the archbishop said.

“I don’t think this is a good place for students,” he added.

There was no immediate reaction from Archbishop Martin to the trustees’ meeting and no indication as to whether he would change his mind as a result of the trustees’ intervention.

In early August, he said he had offered to provide an independent person for whistleblowers to approach, but the response to this offer was the publication of more anonymous letters. At the time, the archbishop said authorities in Maynooth “have to find a way to let people come forward with solid evidence to substantiate the allegations.”