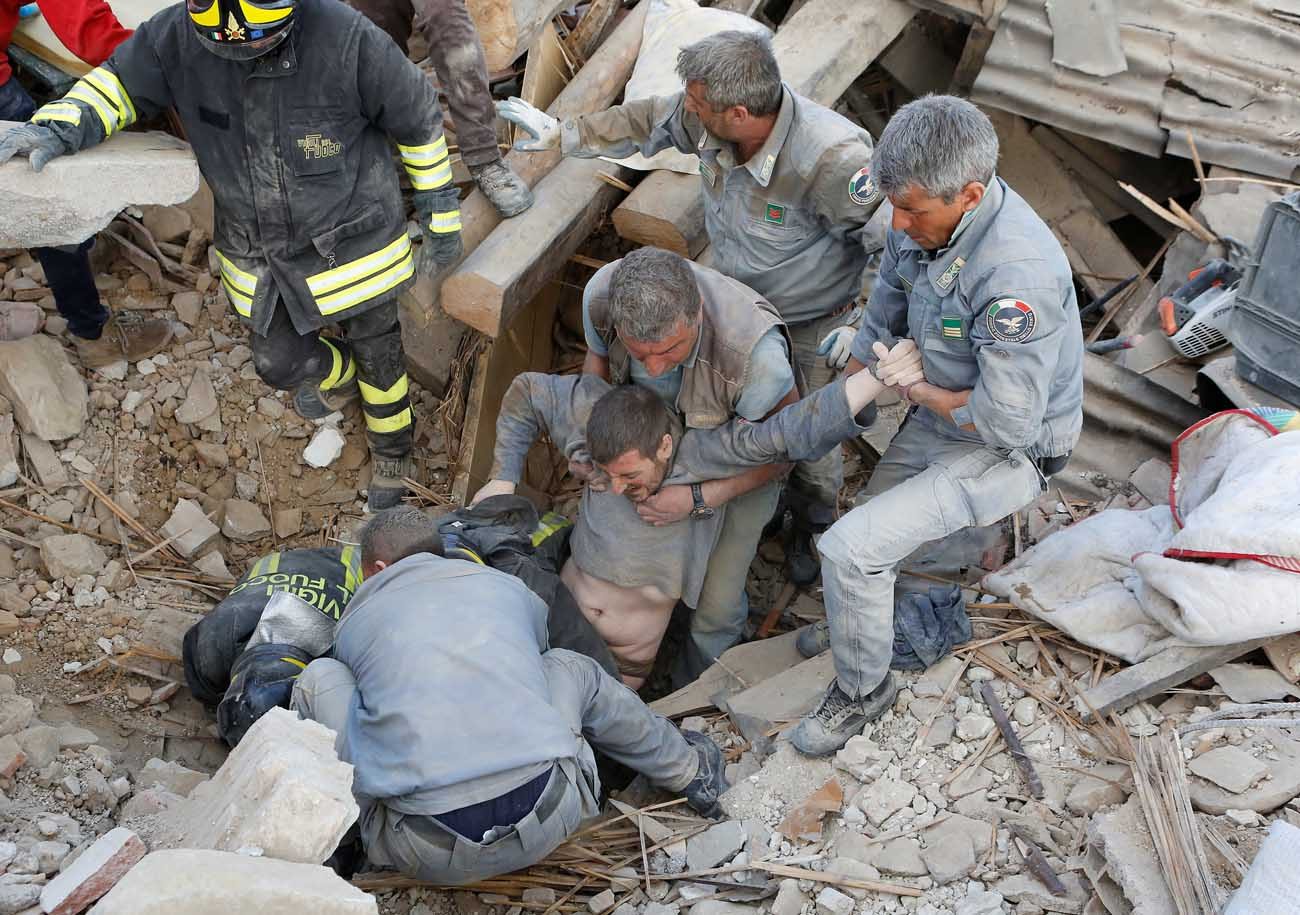 A man is rescued from the ruins following an earthquake in Amatrice, Italy, Aug. 24. (CNS photo/Remo Casilli, Reuters)

While the pope and some 11,000 pilgrims and tourists recited the sorrowful mysteries of the rosary in St. Peter’s Square, six Vatican firefighters were on their way to the town of Amatrice, about 85 miles east of Rome, to help search for victims under the rubble. The pope sent six Vatican police officers to join them the next day.

The U.S. Geological Survey said the magnitude 6.2 quake had an epicenter close to Norcia, the birthplace of St. Benedict and home to a monastery of Benedictine monks, who are attracting a growing number of visitors because of their solemn prayer life and beer brewing business. The monks and their guests were all safe, but the monastery and Basilica of St. Benedict suffered serious structural damage.

Smaller temblors — at least two of which registered more than 5.0 — continued even 24 hours after the main quake. By early Aug. 26, Italian officials said the death toll had reached 267, and 260 people were hospitalized with quake-related injuries. Rescuers had been able to pull 238 people out of the rubble.

When Pope Francis arrived in St. Peter’s Square for his general audience just six hours after the main quake, he set aside his prepared audience talk and instead spoke of his “heartfelt sorrow and my closeness” to everyone in the earthquake zone, especially those who lost loved ones and “those who are still shaken by fear and terror.”

“Having heard the mayor of Amatrice say, ‘The town no longer exists,’ and knowing that there are children among the dead, I am deeply saddened,” Pope Francis said.

Assuring the people in the region of the prayers and “the embrace of the whole church,” the pope asked the crowd at the audience to join him in praying that “the Lord Jesus, who is always moved by human suffering, would console the brokenhearted and give them peace.”

Archbishop Joseph E. Kurtz of Louisville, Kentucky, president of the U.S. Conference of Catholic Bishops, asked U.S. Catholics also to pray the rosary for the victims in Italy, as well as for the victims of other natural disasters, including those suffering because of the flooding in Louisiana. 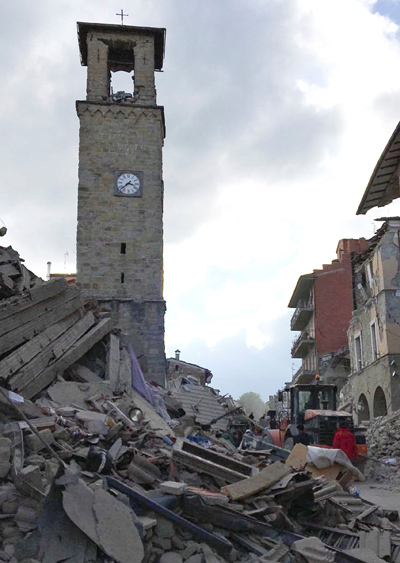 The partially damaged tower bell with the clock signaling the time of the earthquake is seen in Amatrice, Italy, Aug. 24. (CNS photo/Emiliano Grillotti, Reuters)

“Knowing all too well the personal toll of natural disasters in our own country, let us join with the Holy Father in prayer for everyone suffering from Louisiana to central Italy,” the archbishop said in a statement Aug. 24.

Bishop Domenico Pompili of Rieti, the diocese that includes Amatrice, said he received a phone call from Pope Francis at 7 a.m. the morning of the earthquake. The quake and first big aftershock were felt in Rome and woke the pope up, he said, adding that Pope Francis said he had celebrated Mass for the victims shortly after 4:30 a.m.

Caritas Italy and its diocesan affiliates mobilized immediately with volunteers rushing to the impacted towns, helping with the search and rescue operation, providing food and blankets and helping to staff the tent cities erected by the Italian government outside the damaged towns. The Italian bishops’ conference immediately pledged 1 million euros ($1.1 million) for relief efforts and asked all parishes to take up a special collection at Masses Sept. 18 to aid the victims.

In Amatrice, one of the hardest-hit towns, the bodies of three nuns and four of the elderly guests they host in the summer were pulled lifeless from the rubble Aug. 25. Three nuns and two of the elderly were rescued at home run by the Handmaids of the Lord.

Many of the small towns in the region have few residents who live there all year. But in the summer, people return to their families’ native towns to visit grandparents and escape the heat of the big cities. The victims of the quake included dozens of children who were spending the last weeks of August with their grandparents. 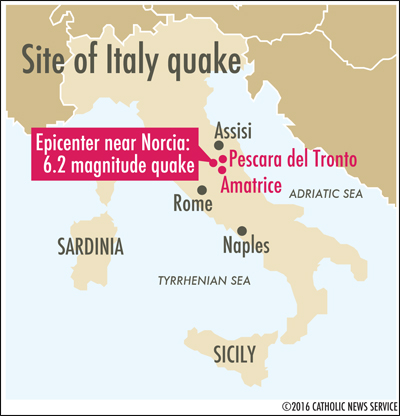 Map shows the site of the Aug. 24 earthquake in Italy. (CNS graphic/Liz Agbey)

Government officials said an estimated 14,000 people were left homeless by the quake. In addition to houses and apartment buildings turned into rubble, dozens of churches and convents in the region crumbled or were heavily damaged.

At the Benedictine monastery in Norcia, the 15 monks and five guests were already awake when the first quake hit, Benedictine Father Benedict Nivakoff told Catholic News Service. Aug. 24 is the feast of St. Bartholomew and “on feast days we get up earlier” to pray, he said.

Within a half hour of the first quake, Father Nivakoff said, the square outside the monastery was filled with people “because it is the safest place in town — around the statue of St. Benedict.”

While no buildings collapsed, “the facade seems to have detached” from the rest of the basilica and major repairs are likely, he said. The monks announced later Aug. 24 that two Benedictines would stay in Norcia, sleeping in tents outside the city walls, but the rest of the community would move temporarily to Rome as a “precautionary measure” as the aftershocks continued.

Assisi is just 45 miles from Norcia and, according to Franciscan Father Enzo Fortunato, the quake was felt strongly at the convent and basilica that suffered major damage from an earthquake in 1997.

While the quake woke all the friars, many of whom ran to the Basilica of St. Francis, no damage was visible, he told ANSA, the Italian news agency.

NEXT: Trustees agree to protect whistleblowers at Irish national seminary