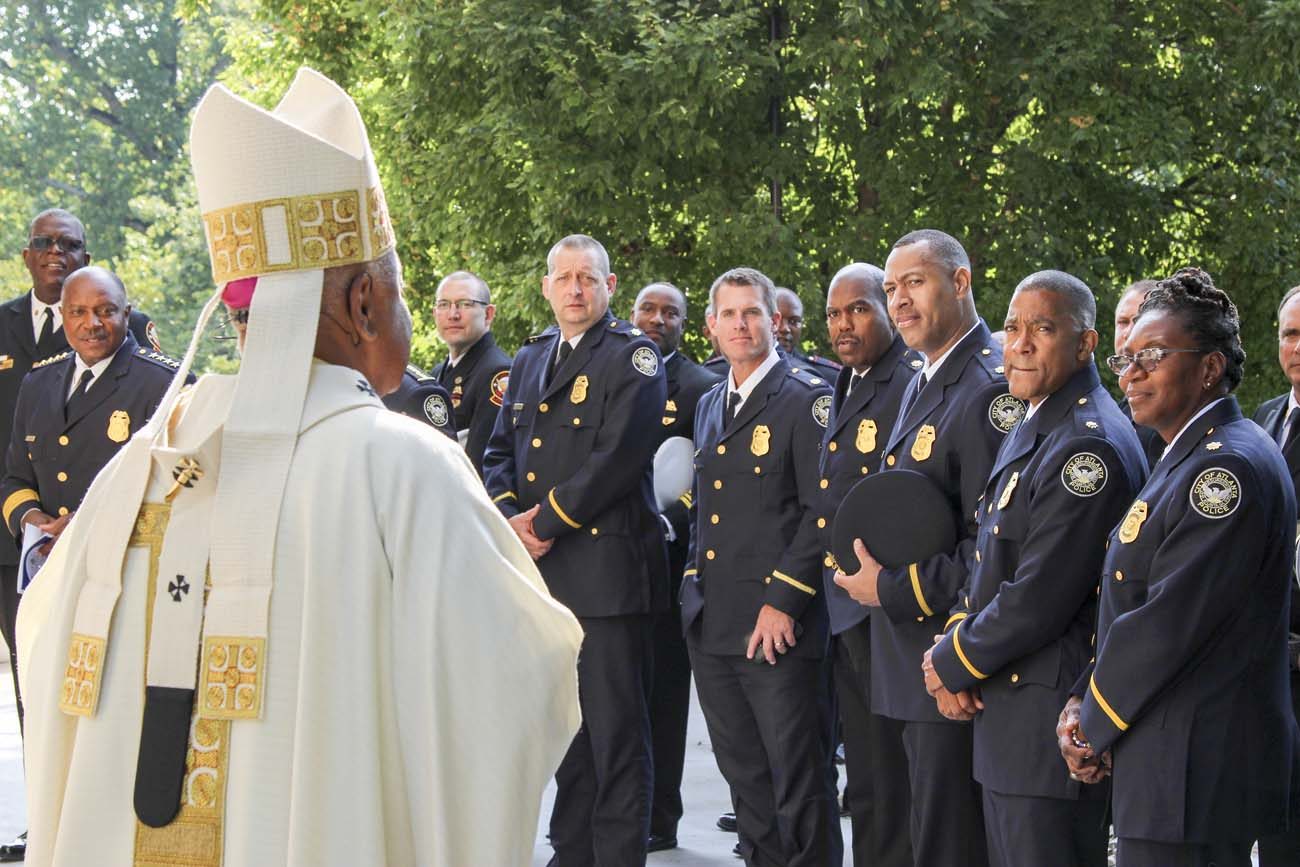 Atlanta Archbishop Wilton D. Gregory talks with officers of the Atlanta Police Department just before the opening of the second annual Blue Mass Sept. 9 outside the Cathedral of Christ the King. In his homily the archbishop spoke of the nation's need to rebuild trust between communities and to seek substantial solutions to an epidemic of violence. (CNS photo/David Pace, Georgia Bulletin)

At the Sept. 9 Mass at the Cathedral of Christ the King, worshippers prayed for peace and gave thanks for the sacrifices of first responders.

In his homily, the archbishop called for prayers for both law enforcement personnel, who in some areas of the country have become the targets of shooters, and for communities where questionable use of police force has resulted in the death of people of color.

The U.S. Conference of Catholic Bishops had designated the day, the feast of St. Peter Claver, as a National Day of Prayer for Peace. It also fell two days before the 15th anniversary of the 9/11 terrorist attacks.

Students from Christ the King School joined community members, chiefs and members of the Atlanta Police Department and Atlanta Fire Rescue Department, and other metro area first responders at the Mass. Outside of the church, a large American flag billowed high above the street, suspended between the raised ladders of two fire apparatus.

In his homily, Archbishop Gregory said a time of prayer is needed particularly this year when protests have erupted against police in several cities, and they themselves have been the targets of snipers. Public servants need public support, he said.

“These fine men and women need to know of our respect, gratitude and support more today than ever before,” he said.

He added that prayer also is needed because communities have seen men of color killed when the use of such force by police was questionable.

“We people of color likewise urgently need today’s prayerful pause as well since we have too frequently endured the awful burden of seeing our young men cut down by aggressive law enforcement actions,” said Archbishop Gregory, who is African-American. He is the chairman of the U.S. bishops’ new task force on race.

“Guns and violence, harsh rhetoric and vitriol, blame and accusation have become an undesirable part of our everyday life during this passing year,” he said.

The Gospel reading from St. Luke’s sixth chapter suggests that there are beams in our nation’s eye inhibiting its people from seeing and appreciating viewpoints other than their own, said the archbishop.

“We need to seek systemic solutions rather than simply crafting more facile phrases,” said Archbishop Gregory. “We need to see one another as fellow human beings with the inherent God-given dignity that belongs to each person.”

The archbishop upheld St. Peter Claver as an example. The saint labored for 33 years in Cartagena, Colombia, the slave port of the New World, ministering to abjectly abused African slaves with kindness and seeing them with the “eyes of his heart.” He went into the holds of slave ships to care for the sick and dying, taught the faith, and worked to end the slave trade.

“We need to rely on actions that speak louder than the harsh rhetoric that so abounds in our world today,” Archbishop Gregory said.

“They must behold in you the eyes of security, welcome, comfort and strength,” the archbishop told those in uniform.

He added, “All of us, in turn, need to recall that those who serve us in public office are very much like ourselves — ordinary men and women who seek to do nothing more than their best in keeping us safe and secure.”

Archbishop Gregory emphasized that both citizens and first responders, and men and women of every race and background, should speak with their hearts to convey respect.

In the United States, the Blue Mass tradition began in 1934 when Father Thomas Dade of Baltimore formed the Catholic Police and Fireman’s Society and celebrated the first Mass for police officers and firemen. The Mass draws its name from the traditional uniform color associated with those professions.

Soloist Natalie Howard sang the national anthem as the honor guards of the police and fire departments and the City of Atlanta Department of Corrections presented the colors. The honor guards also saluted memorial wreaths for lives lost in public service to others.

The Mass included a blessing of badges that those who wear them serve with devotion, justice and peace. Together, the congregation prayed the “Prayer for Peace in Our Communities.”

Turner reflected on the Scripture verse, “For greater love hath no man than this, that he lay down his life for his friends.”

“These words mean so much to me,” said Turner, adding that the oath officers take to serve and protect the community is a daily reminder when they go out on a call, regardless of the situation.