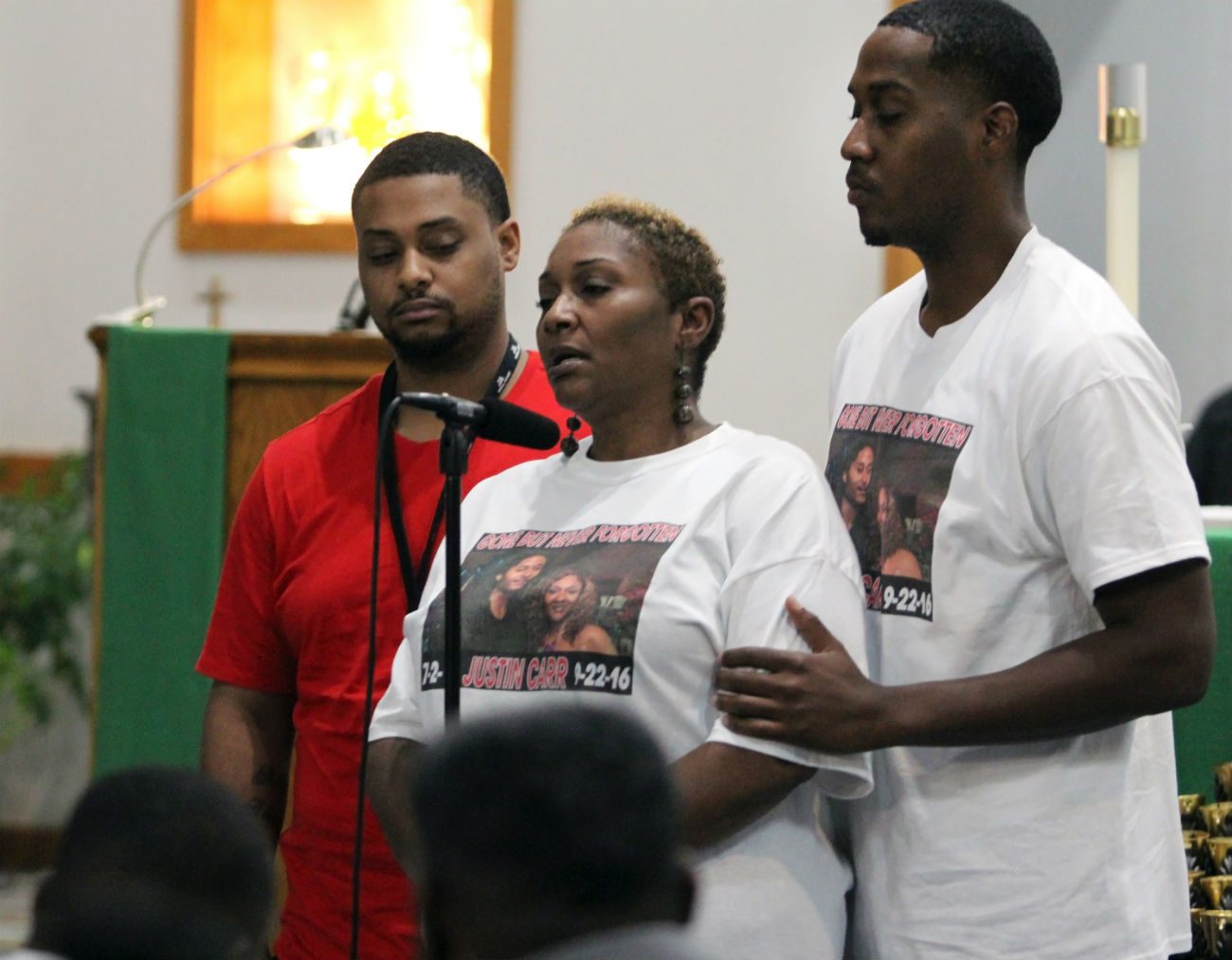 Vivian Carr and her sons Kenneth Johnston and Ellis Carr speak during a Sept. 23 prayer service at Our Lady of Consolation Catholic Church in Charlotte, N.C. The previous day Vivian's other son, Justin Carr, died from a gunshot wound to the head that he received during protests in Charlotte which turned violent following the fatal police shooting of an African-American man. (CNS photo/Patricia L. Guilfoyle, Catholic Herald)

CHARLOTTE, N.C. (CNS) — Justin Carr’s future looked bright. He had just celebrated his 26th birthday, started a new job, and was getting ready to settle down with his high school sweetheart and start a family.

But all that ended the night of Sept. 21, when a bullet shattered his skull. The next day, he was dead.

Carr’s death marked the most violent episode in nearly a week of protests in Charlotte that erupted after another man, Keith Lamont Scott, was shot and killed by police Sept. 20 in an apartment complex parking lot.

Demanding justice in the police shooting, protesters marched through uptown Charlotte the evening of Sept. 21 and confronted police in riot gear. Carr was among them.

“I need to make a stand,” he told his mother when he called her from the scene. He said wanted to follow in the footsteps of his grandmother, who had marched during the civil rights era.

Less than an hour later, Vivian Carr learned her son was in the hospital, clinging to life.

Law enforcement officials Sept. 24 released video of the encounter between Scott and an officer; both men were African-American. Police say Scott was fatally shot after he made a threatening move with a gun. His family members say he had no gun, that he was reading a book and was not being aggressive when police surrounded him. Along with video, police released photos of a pistol and ankle holster recovered at the scene.

Vivian Carr recounted her last memories of her son during a special prayer service Sept. 23 at Our Lady of Consolation Catholic Church, where the Carr family has worshipped for three generations.

Father Carl Del Giudice, pastor, organized the prayer service to give people a chance to share their feelings about the protests and the tragedy that had struck their parish family. Father Del Giudice gave Carr last rites before he died, and is ministering to the Carr family throughout the tragedy.

“I know that my son died for a cause,” Vivian Carr told a standing-room-only crowd at the church.

“I just want to thank everybody for coming out and thanks for all of the love and support that everybody’s given,” she continued. “It’s very, very, very hard for me. This is the hardest thing I’ve ever had to do in my life. But through everybody’s love, support and my strength in God, I’m able to carry through this.”

Carr’s two brothers praised him for standing up for people’s rights and they defended his reputation from what they called false social media reports.

Struggling to find words through his tears, Ellis Carr said, “They took my best friend. He was the best big brother ever.”

During the prayer service, people spoke of their fear of getting stopped by police or their sons getting racially profiled. Others begged people to get involved in the community, uniting to turn their anger into economic and political change.

Father Del Giudice acknowledged people’s anger and fear, but he encouraged them to lift each other up and bring their Catholic faith into the world, “uplifting and elevating others to do better, and honoring and recognizing who we are.”

He recounted his own experiences with racism while growing up in segregated Winston-Salem, including one incident at the local country club pool, which at one time was limited to white people only. He recounted how a little boy was allowed to bring his dog into the pool, but when a black employee accidentally fell into the pool that same day, “they immediately closed the pool, drained it, scrubbed it, disinfected it, before they would let people back in to it. What’s the lesson I learned? That many whites see blacks as less than animals.”

Hatred, though, comes from the devil, who seeks to divide us, Deacon Todd said. Instead, people should look to Jesus as their example.

“Develop a personal relationship with Jesus,” he said. “Rely on God.”

“When we develop that personal relationship with Jesus, we begin to think, talk and act just like him. We have that relationship where we know what he would do in a certain situation,” he said. “It doesn’t mean turn the other cheek, let somebody walk all over you. It means, yes, you can protest but you have to protest within the range that God gives you.”

Carr’s pregnant girlfriend, Tanae Ray, was the last person to speak at the prayer service. In her emotional remarks, Ray described how they had been close friends for years before they began dating in the ninth grade. Their relationship had been “on and off” over the years, but recently he had asked to marry her.

Over the past few weeks, she said, “he was just so excited, the happiest I’ve ever seen him.”

When Carr told her that he was going to the protest, she didn’t think he was serious. She said she regretted not stopping him from going. “I feel like I could have prevented it.”

“If I had known these were his last days I would have cherished it,” she continued through her tears.

“Now I’m carrying his son. Everybody’s saying, ‘It’s going to be OK.’ But it’s not. I need Justin. Ain’t nobody can take his place — no brothers, uncles, cousins. I need him, and I don’t have him,” she wept.

After his death, Carr’s heart, lungs and liver were donated to enable other people to live, Vivian Carr said.

“His heart beats on,” she said. “He’s already helped save three other lives.”