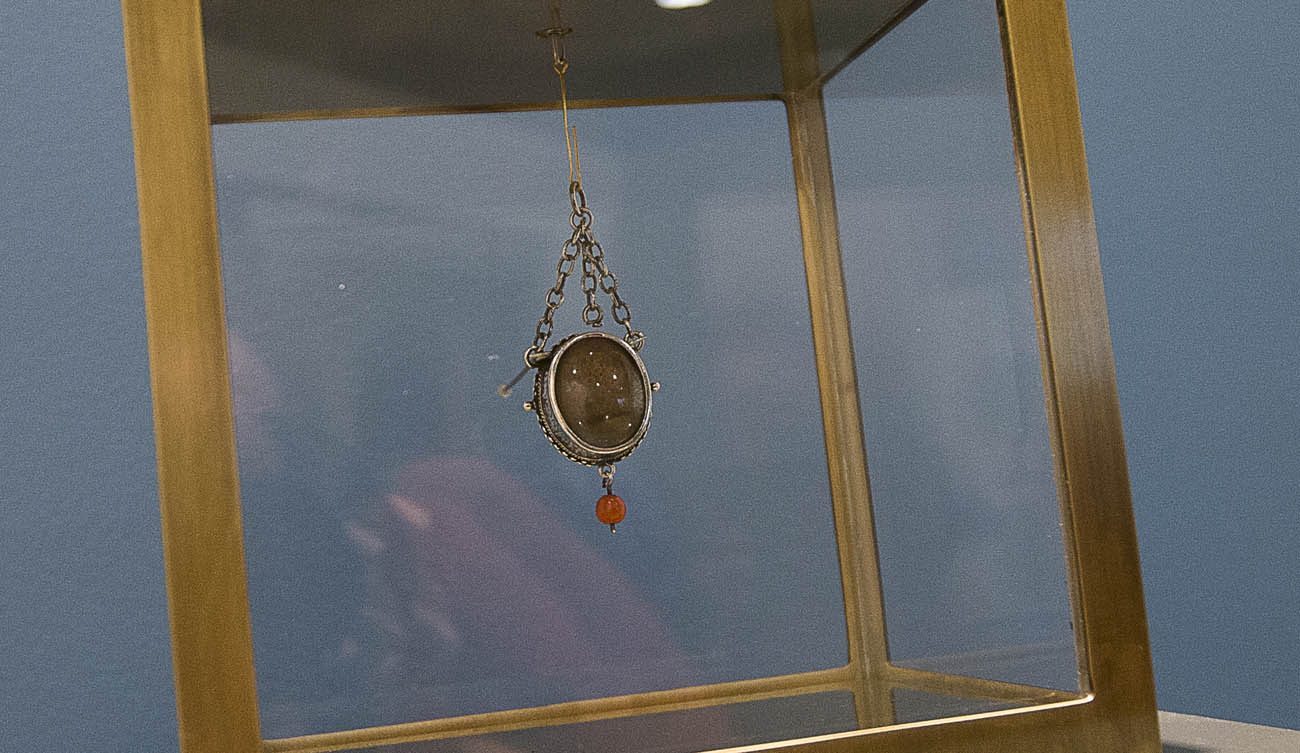 A relic of St. Thomas More's tooth and jaw bone is seen through in a glass case at the St. John Paul II National Shrine in Washington Sept. 15. An exhibit of artifacts associated with the saint will be open daily at the shrine until March 31, 2017. (CNS photo/Tyler Orsburn)

Titled “God’s Servant First: The Life and Legacy of Thomas More,” the exhibit runs through March 31. The title comes from what are believed to be More’s last words before going to the chopping block where he was beheaded: “I die the king’s good servant, and God’s servant first.”

Nearly all of the 60 or so items in the exhibit come from Stonyhurst College in England, according to Jan Graffius, the curator of collections at Stonyhurst, a Jesuit institution. The Knights of Columbus and Stonyhurst’s Christian Heritage Center organized the exhibit and are its sponsors.

To be able to have so many artifacts is remarkable, Graffius told Catholic News Service Sept. 15, the day before the exhibit opened, as she and her team were putting the finishing touches on the exhibit. King Henry VIII, who had St. Thomas More imprisoned in the Tower of London for more than a year before his execution, and subsequent monarchs had made Roman Catholicism virtually illegal and had all traces of Catholicism wiped out.

St. Thomas More, a lawyer and the first layman to serve as chancellor of England, had balked at helping Henry VIII obtain an annulment so he could marry Anne Boleyn in hopes of bearing him a son to be heir to the throne. After the pope denied the annulment, Henry declared himself head of the church in England, conferring upon himself the power to divorce and marry whomever he pleased. 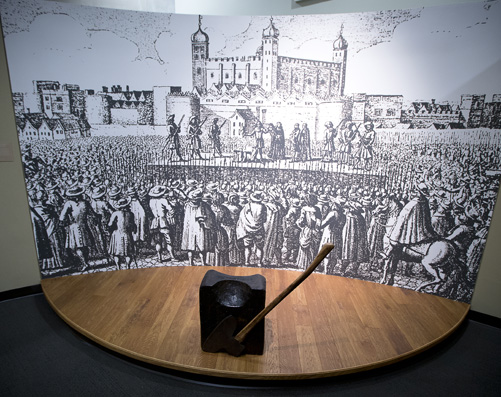 More, who also was a husband and father, resigned his position as chancellor to the throne to avoid being forced to acknowledge Henry VIII as head of the church. But after a law was passed requiring acknowledgment by all Britons of Henry’s authority, More refused to sign a document stating as such. He was ultimately imprisoned, convicted of a capital treason with the help of perjured testimony, and beheaded. He has since been seen as a champion of conscience rights.

The luckless first wife of Henry VIII, Catherine of Aragon, spent her last days before her own death, possibly from poisoning, embroidering grapes onto a chasuble. That chasuble is in the exhibit.

Anne Boleyn wasn’t all that lucky, either. After bearing a daughter — Elizabeth I — and later miscarrying, she fell into Henry’s disfavor, was imprisoned on trumped-up charges of adultery, incest and treason, was herself beheaded 11 months after Thomas More, and buried not far from him, Graffius said.

Two relics in the exhibit made their way to the United States a few months ahead of the rest of the artifacts. One is a jawbone fragment of St. Thomas More; the other is a ring worn by St. John Fisher, who was also martyred under Henry VIII. Both were on exhibit during the U.S. bishops’ “Fortnight for Freedom” activities in June and July.

The anti-Catholic laws imposed by Henry VIII stayed on the books in England for nearly three centuries until they were repealed in 1829. In 1886, St. Thomas More was beatified. In 1935, both he and St. John Fisher, who had been executed a few months before More, were both canonized. St. Thomas More was added to the Anglican calendar of saints in 1980.

Because of the anti-Catholic laws, Graffius said, Catholic parents had to sneak their children out of the country, sometimes under false identities, so they could receive a Catholic education. One of those schools was in the Spanish Netherlands — mostly modern-day Belgium and Luxembourg — and was the forerunner to Stonyhurst College.

St. Thomas More was part of the martyrology proclaimed every day at the school. The exhibit includes a schoolbook used by two brothers who eventually made their way to the United States. On one page of the book, an illustration of two men was defaced when one of the students sketched the men as smoking pipes. To this day, she added, nobody knows whether the pipes were added by John Carroll, the first Catholic archbishop in the United States, or his cousin Charles Carroll, the only Catholic signer of the Declaration of Independence.

In 2000, St. John Paul II made St. Thomas More, who had already been the patron saint of lawyers, the patron saint of statesman and politicians. The pontiff said his life and martyrdom offered a testimony that “spans the centuries” and “speaks to people everywhere of the inalienable dignity of the human conscience.”

“He is an eloquent example of courageous Christian discipleship, and it is our hope that this exhibit will inspire others to imitate his virtues and his extraordinary fidelity to God and to a well-formed conscience,” Kelly added.

The exhibit comes during the golden anniversary of the 1966 film biography of St. Thomas More, “A Man for All Seasons.” Recently restored with a new Technicolor print, “A Man for All Seasons” — based on the stage play of the same name — grossed the fifth-best box office numbers of the year, a stunning accomplishment given that it wasn’t released until Dec. 12 that year and the weightiness of its subject matter.

The movie was nominated for eight Oscars and won six, including Best Picture, Best Director for Fred Zinneman and Best Actor for Paul Scofield as Thomas More. It also won five British Academy Film Awards and four Golden Globes, as well as a Best Actor award for Scofield at the Moscow International Film Festival.

NEXT: Bishop, other leaders call for peace, unity after attack in Minnesota