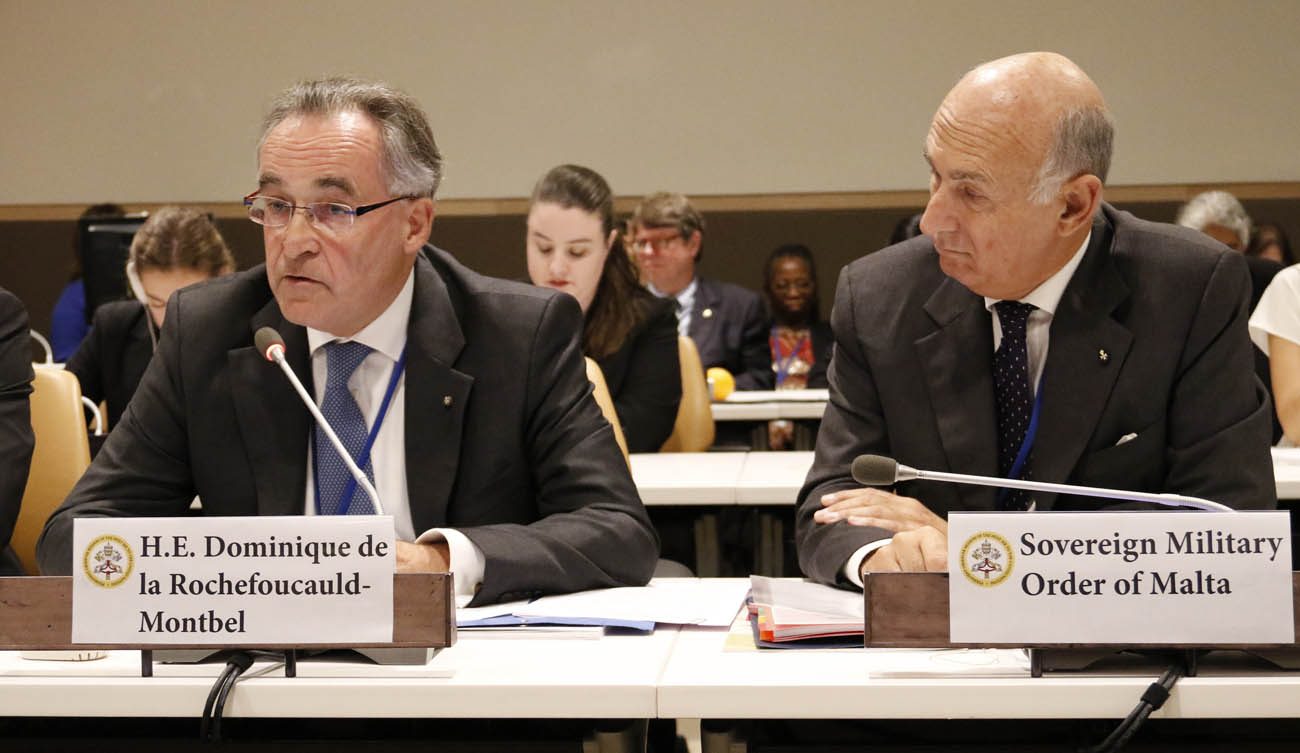 Dominique Prince de la Rochefoucauld-Montbel, grand hospitaller of the Order of Malta, speaks during a high-level side event Sept. 19 at the United Nations on the role of religious organizations in responding to the ongoing refugee and migration crisis affecting many areas of the world. Looking on is Ambassador Stefano Ronca, secretary-general for foreign affairs of the Order of Malta. (CNS photo/Gregory A. Shemitz)

“From time immemorial, people from a wide range of faith traditions have given special attention to the needs of migrants and refugees,” said the Vatican secretary of state, Cardinal Pietro Parolin. The response by Catholic institutions to the needs of large groups of people on the move is guided by the rich body of Catholic doctrine and tradition developed over two millennia, he said.

Cardinal Parolin delivered the keynote address at a forum that considered “Responsibility and Solution Sharing: The Role of Religious Organizations in Responding to Large Movements of Refugees and Migrants.”

The side event was held in conjunction with the U.N. Summit on Large Movements of Migrants and Refugees and sponsored by the Permanent Observer Mission of the Holy See to the United Nations, with the International Catholic Migration Commission and Caritas Internationalis.

“While migration has always been with us, it is becoming an unprecedented phenomenon in our days,” the cardinal said. Many large movements of people are involuntary, and caused by conflict, violence, persecution, discrimination, poverty and environmental degradation, he said.

Migrants and refugees face the dangers of trafficking, starvation, and abuse on their journey, but a bad situation gets worse, he said: “Upon arriving at their destination, rather than finding a safe haven, they find mistrust, suspicion, discrimination, extreme nationalism, racism and a lack of clear policies regulating their acceptance.”

In environments characterized by fear, violence and suspicion, the cardinal said, local faith communities, Christian and others, provide a human approach and immediate assistance for the basic necessities of life and also offer health assistance, post-traumatic physical and emotional care, accompaniment and advocacy, and help establish community relationships and local integration.

“Pope Francis has undoubtedly placed refugees and migrants at the top of his agenda,” Cardinal Parolin said.

Throughout his papacy, he has visited, advocated for, prayed with and provided direct resettlement aid to uprooted peoples. Most recently, “in instituting the new Dicastery for Promoting Integral Human Development, Pope Francis placed under his personal guidance the section that specifically oversees matters concerning refugees and migrants,” the cardinal said.

Scalabrinian Father Flor Maria Rigoni shelters Central American asylum seekers in southern Mexico, where he sees both despair and hope every day. “At our doors we have our little Latin American Syria,” an area disrupted by an undeclared civil war, but considered politically insignificant on the world map.

“The flow of migrants we attend do not choose migration for a better lifestyle, they escape and flee for survival,” he said. Adolescents are forcibly recruited for violent gangs and face death if they resist.

Father Flor was profoundly moved by a phone call from a Honduran woman he sheltered. She was handcuffed by a Border Patrol officer after she crossed into the United States. When she begged him to shoot her so she would not have to return, he unshackled her and let her go.

“That officer did not comply with the rules of the Border Patrol, but instead demonstrated the heart of the American nation,” he said. The priest asked listeners to “honor the spirit of the law even if it breaks the letter of the law.”

Dominican Sister Donna Markham, president of Catholic Charities USA, said the U.N. summit “sends a strong signal that the human rights of migrants and refugees are not up for debate.”

She said her organization settled one-third of the approximately 70,000 refuges who entered the United States last year. “Catholic Charities welcomes refugees from all parts of the world and extends love and support to each frightened human being.”

Refugees are courageous and resilient people who contribute to the fabric of their community and its economic well-being, she said.

The scale of the current crisis, particularly along the Mexican border with Texas, is a reminder that words and promises are not enough, Sister Markham said. It is incumbent on nations and organizations to work diligently, protect the rights of migrants, treat them with dignity and address the root causes of their situation.

Petra Hueck, director of the International Catholic Migration Commission Europe office, said parishes and faith-based organizations have a vital role in refugee resettlement in the context of the increasingly polarized and often toxic immigration debate taking place in Europe. Alarming rhetoric on the national level does not reflect local reality, she said. “Integration takes place every day, step by step” in local communities, reflecting common human values and demonstrating solidarity with those in need.

Karen AbuZayd, U.N. special adviser on the summit, said religious organizations shape policies through their example of “welcoming the stranger” and ability to respond quickly to people in distress.

Gregory Maniatis, U.N. special adviser on international migration, said: “Migration tests both our prejudices and generosity.” Despite forces that pull people apart and alienate them on the global level, there are equally strong forces that draw them together into local communities, he said.

Omar al-Muqdad is a Syrian refugee journalist served by the International Catholic Migration Commission in Turkey and resettled in Arkansas with the help of Catholic Charities and the U.S. Conference of Catholic Bishops’ Migration and Refugee Services.

Coming to the U.S., “I found the kind of freedom that I needed the most as a human being and as a journalist, the kind of freedom I wish upon all my people who have lived most of their lives under a hostile regime … and were forced to run away from all of it to the unknown,” he said.

Dominique Prince de la Rochefoucauld-Montbel, a representative of the Order of Malta, said faith-based organizations and religious institutions have a unique comparative advantage in humanitarian conflicts. To be successful, we have to be more cooperative. To welcome suffering people with dignity, we must challenge global indifference, face fear and repudiate welfare selfishness, he said.