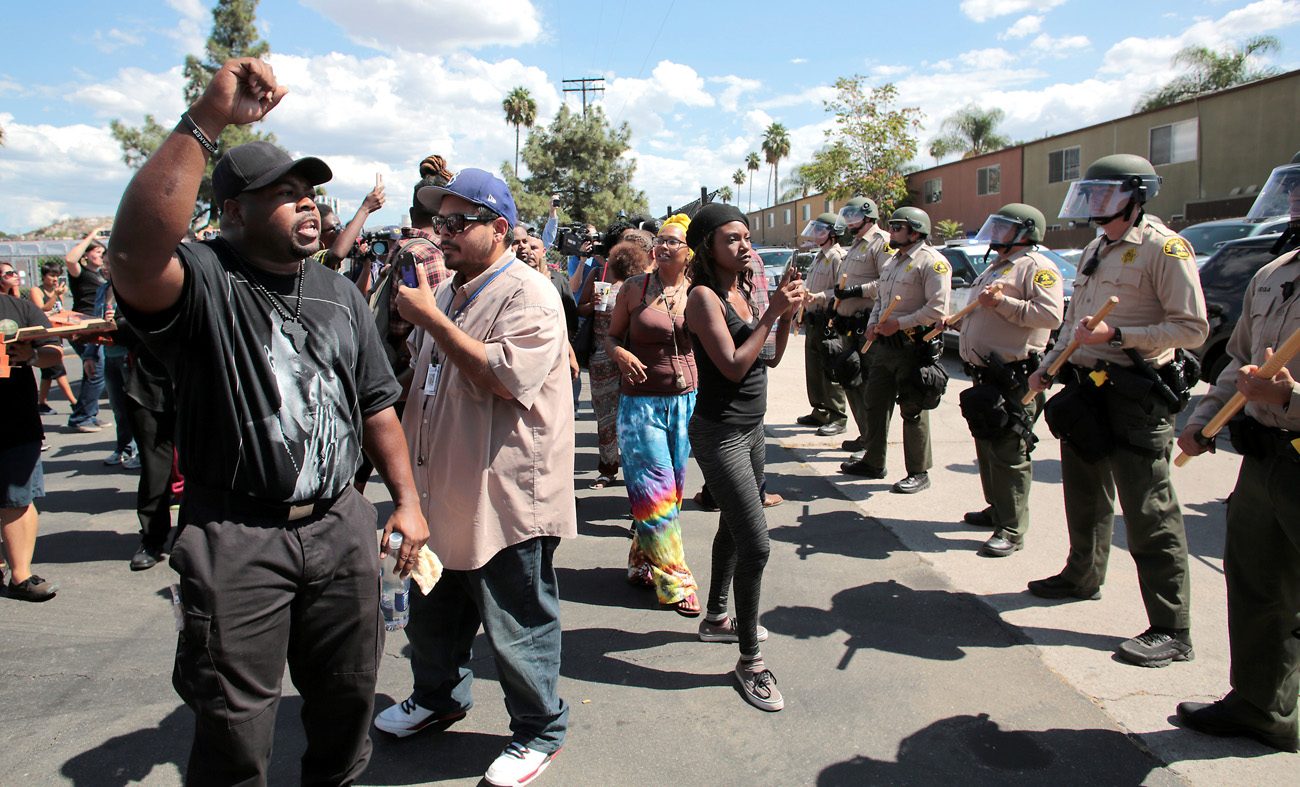 Protesters confront San Diego Sheriff's deputies Sept. 28 near the site where an unarmed black man was fatally shot by police in El Cajon, Calif. Bishop Robert W. McElroy of San Diego asked people to pray for calm and called on police to be "as transparent as possible" in their investigation following the Sept. 27 shooting of Alfred Olango. (CNS photo/Earnie Grafton, Reuters) 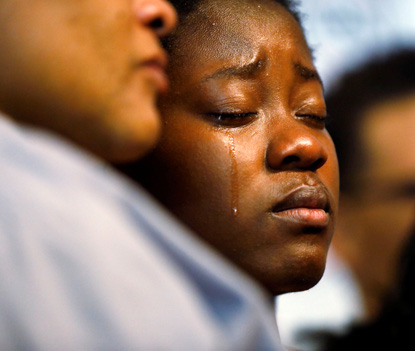 Tears stream down the cheeks of the daughter of Alfred Olango at a Sept. 28 a news conference held by Olango’s family a day after the unarmed black man was shot dead by police in El Cajon, Calif. (CNS photo/Patrick T. Fallon, Reuters)

SAN DIEGO (CNS) — Bishop Robert W. McElroy of San Diego asked people to pray for calm and called on police to be “as transparent as possible” in their investigation following the shooting of unarmed man in a San Diego suburb.

The bishop said the Catholic community was saddened by the shooting death of Alfred Olango of El Cajon during a confrontation with police officers Sept. 27.

“We understand the pain the community feels. We pray for calm during this wrenching time and stand ready to work together to achieve true justice and peace for all,” Bishop McElroy said in a brief statement released by the diocese Sept. 29.

The bishop said he acknowledged the personal risk police officers face, but called for transparency as they worked to piece together details of the incident.

Since the shooting, protesters have marched in the streets of El Cajon.

Authorities said two men were arrested late Sept. 29 after violence broke out during a protest involving 50 to 75 people. Law enforcement officers shot pepper spray to disperse the protesters who had blocked streets and got into a confrontation with drivers upset with the road closing.

Witnesses said some protesters threw bottles at police in riot gear during a third night of protests.

The shooting occurred after two police officers responded to a report of a man behaving erratically and walking into the street. Police said one of the responding officers aimed a Taser at the man and the other drew a gun. Both officers fired when the man, identified as Olango, pointed a silver object and pointed it at one of the officers.

The object turned out to be vape smoking device with a metal cylinder, police said. A photo released by authorities showed the man pointing the device at one of the officers. Family members have called for release of police video of the incident.

Police declined to release any video, citing guidelines by the district attorney requiring the investigation to move forward.

Members of Olango’s family have said they had called police for help and told them that he was having an emotional breakdown and was unarmed.

NEXT: Most Catholics want company health plans to cover contraception