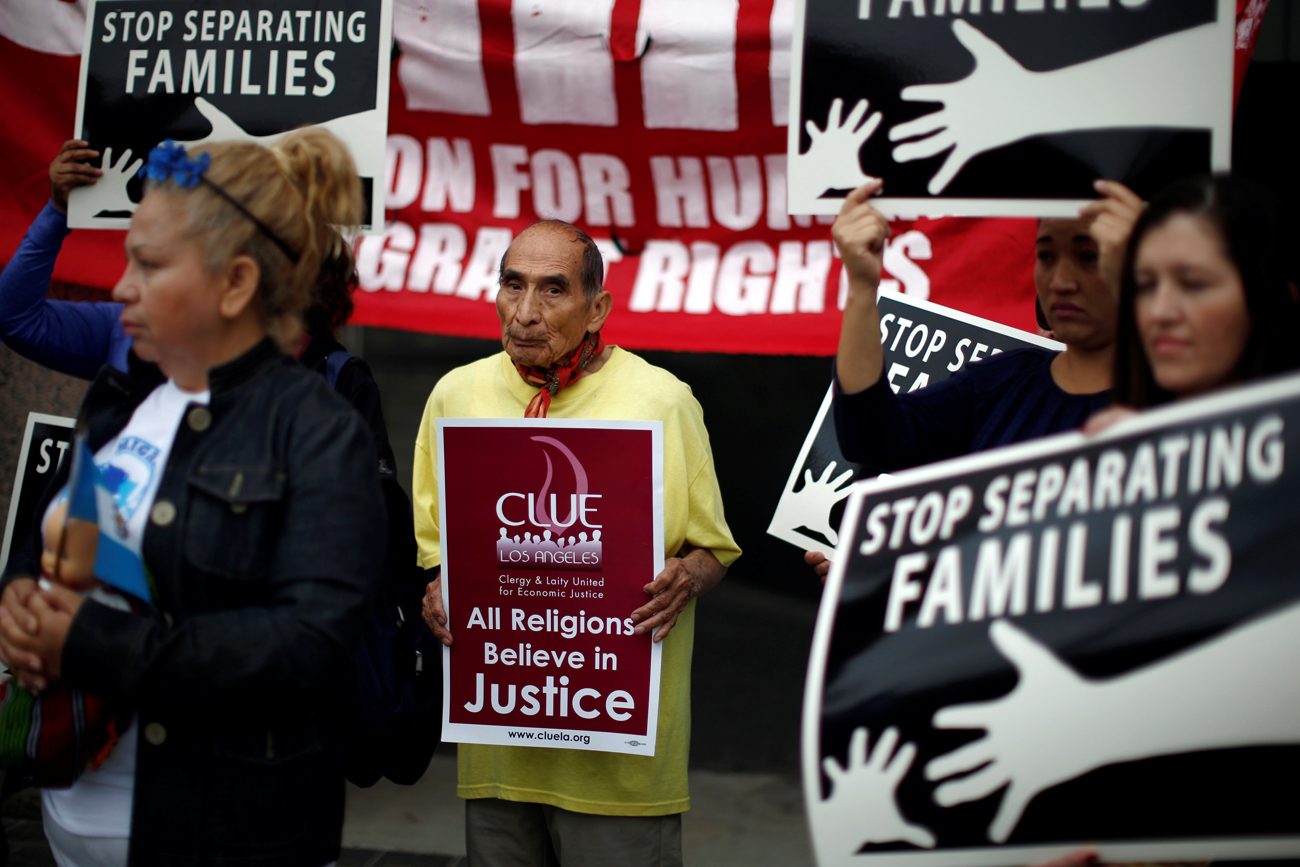 People hold signs in late May during a protest in Los Angeles against plans to deport Central American asylum seekers. Catholics and other faith leaders Sept. 28 called for action on immigration reform. (CNS photo/Lucy Nicholson, Reuters)

WASHINGTON (CNS) — Catholics have joined a group of Christian faith leaders asking politicians to address immigration reform within 100 days of the 2017 legislative session of Congress.

They’re also calling out what they say is anti-immigrant rhetoric and are calling on Christians in the country to welcome and appreciate immigrants.

Bread for the World, a Christian group focused on ending hunger but one that also addresses social issues, spearheaded the effort to unite a variety of Christian groups as well as organizations representing Latino, Asian, African and Middle Eastern immigrants.

They met Sept. 27 as the “We Stand Together” network. In a statement released by Bread for the World Sept. 28, the network says it offers a vision of a future that reflects “God’s grace and love for all people, including undocumented immigrants” and pledge “to speak out whenever anti-immigrant rhetoric gains national attention and when local events merit a national response.”

Elisabeth Roman, president of the National Catholic Council for Hispanic Ministry in Chicago, said that “what we’ve seen in the politics of this past year” made the network and the statement by faith leaders necessary.

“We’ve seen such anti-immigrant tone,” she said. “We need to come together to raise our voices.”

The Rev. Art Cribbs, executive director of Interfaith Movement for Human Integrity, who also is part of “We Stand Together,” said others need to remember that the person at the center of Christianity once was in the same position many immigrants find themselves in today.

“Just as Jesus was taken by his parents across borders for sanctuary, today families are seeking safety in the United States,” Rev. Cribbs said. “We stand with them and call on Congress to enact policies that protect and provide for their care. And, as Christians, we urge churches to open their doors and receive immigrants into our communities, for that is required of us in these days.”

The faith leaders, in the statement at www.bread.org/westandtogether, urge Christians and others to back away from “the rhetoric of division and distrust” that distracts from building community and instead to talk about “God’s welcome for all people.”

They said Christians must speak up for their sisters and brothers who are forced to flee their homelands because of violence and harsh economic conditions. They also said immigration is not an issue solely affecting Latinos in the U.S.

The Rev. Nayoung Ha, organizing director with the Korean American Resource and Cultural Center in Chicago, said immigration is “also an Asian-American issue.”

One out of six Korean-Americans is without documentation to be in the country legally, said Rev. Ha, adding that the number of Asians in the country in this situation has been growing.

The Christian leaders said their actions were firmly rooted in the word of God. Roman, whose organization provides a national network for the religious, social, professional, and civic advancement of Catholic Latinos in the U.S., said immigration wasn’t mentioned in the recent debate between the Democratic and Republican candidates. But it’s an issue that is nevertheless important, especially for Christians, she said.

“We’ve come together, we fight for the same reason,” Roman said. “These are people of God.”