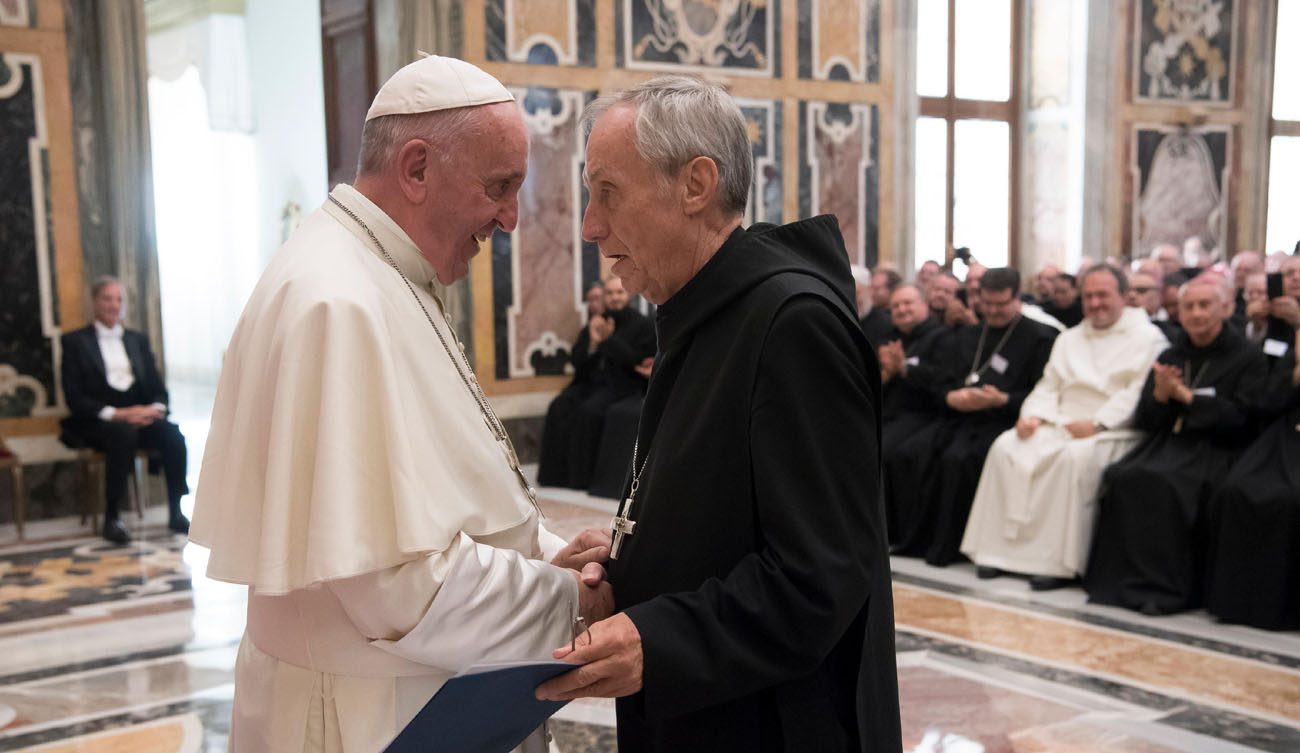 Pope Francis greets Abbot Primate Notker Wolf, superior of the Benedictine order, during a meeting with the heads of Benedictine monasteries from around the world at the Vatican Sept. 8. The Benedictines are meeting in Rome Sept. 3-16 to elect a new abbot primate. (CNS photo/L'Osservatore Romano, handout)

At a time when the church is called to focus increasingly on the essential, Benedictine monks and nuns possess “a unique gift and a special responsibility — that of keeping alive spiritual oases where pastors and the faithful can draw from sources of divine mercy,” the pope said.

The pope’s remarks came in a speech Sept. 8 to abbots and conventual priors from 250 monasteries of Benedictine men from around the world as well as representatives of Benedictine women. They were in Rome to attend the Congress of Abbots Sept. 3-16 and to elect a new abbot primate to head the international confederation of monasteries Sept. 10.

In his remarks to the pope, outgoing Abbot Primate Notker Wolf highlighted some of the Benedictine order’s recent work: Many monasteries have been taking in migrants and refugees, offering them housing, employment and education; promising relationships have been formed with Buddhist monks and with Muslims; and around 160,000 students are enrolled worldwide in Benedictine educational institutions.

Pope Francis said the Benedictines’ work in the formation and education of youth “is very much appreciated and highly qualified.”

Thanks to their studies and experience of the Benedictine way of life, these students can become skillful experts in the values proposed by St. Benedict’s rule, he said.

He praised the monks’ efforts to live merciful and fraternal lives in their communities, which they do “through that industrious and eloquent silence that lets God speak in the deafening and distracted life of the world.”

“Even though you live separate from the world, your seclusion is not sterile, rather it is an enrichment, not an obstacle to communion,” he said, referring to his apostolic constitution, “Vultum Dei Quaerere,” on the contemplative life of women — a document that is also addressed “by extension to all monks,” he told his audience.

The Benedictine charism of hospitality, he said, allows members to encounter people whose hearts are “lost and distant” and who may be living a moment of “great human and spiritual poverty.”

He urged them to not let the declining number of members in their monastic communities be a discouragement, but rather to be an impetus to hold onto “the zeal of your testimony” and the enthusiasm and courage needed to establish new communities.

“Your service to the church is very precious,” Pope Francis said; “Even today there is a need for men and women who put nothing before the love of Christ,” who receive daily nourishment from God’s word, who celebrate the holy liturgy in a dignified manner and who work in harmony with creation.