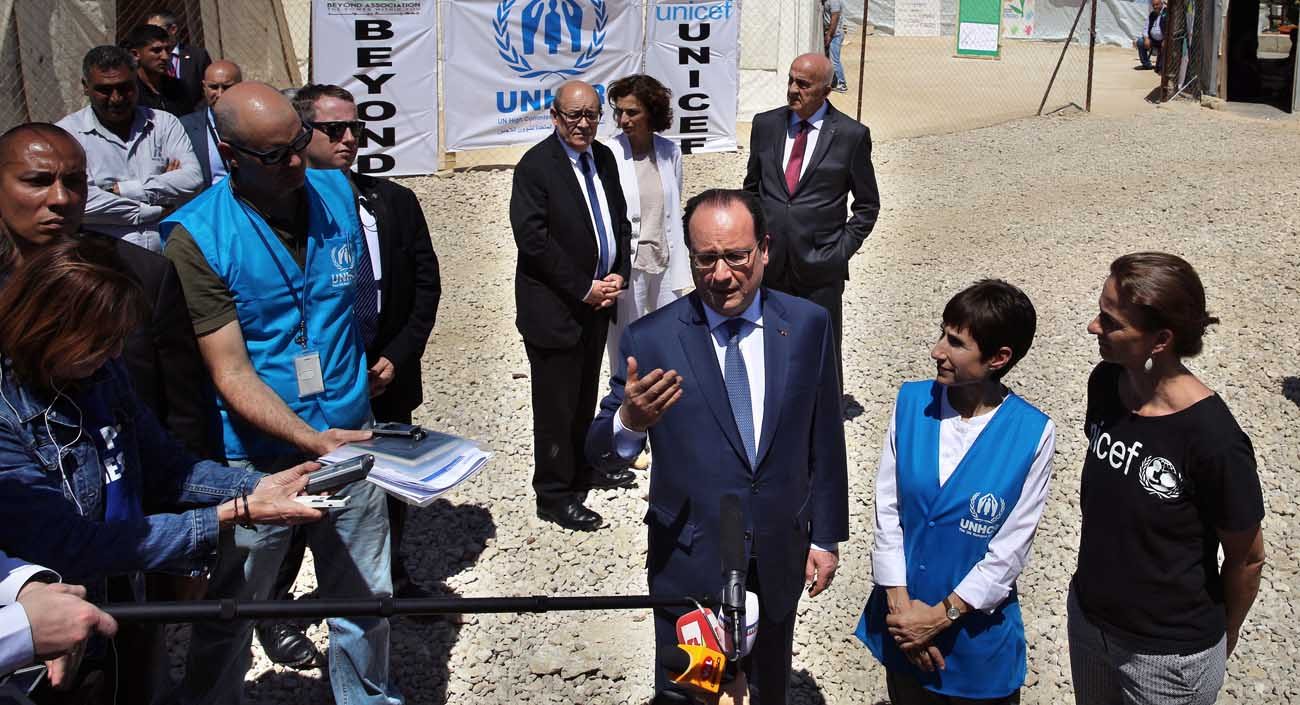 French President Francois Hollande speaks to journalists during a visit to a camp for Syrian refugees in mid-April in Lebanon's Bekaa Valley. Journalists must not foment fear when covering issues or events such as forced migration due to war or famine, Pope Francis said. (CNS photo/Bilal Hussein pool via EPA)

VATICAN CITY (CNS) — Journalists must not foment fear when covering issues or events such as forced migration due to war or famine, Pope Francis said.

While criticism and exposing wrongdoing is “legitimate and, I would add, necessary,” reporters must never let their words become “a weapon of destruction” against people or nations, he told representatives of Italy’s national association of journalists. About 400 people attended the audience in the Apostolic Palace Sept. 22.

Despite the major shifts in how news is produced and distributed, journalists who follow professional standards “remain the mainstay, a fundamental element for the vitality of a free and pluralist society,” the pope said.

Journalists have a great responsibility in writing what is in some ways “the first draft of history,” in deciding what news goes out, he said, and, “this is very important,” in spreading an interpretation of events to people.

Being honest, respectful and professional is especially crucial for journalists because “their voice can reach everyone, and this is a very powerful weapon,” he said.

If a person is unjustly slandered, “he can be destroyed forever,” the pope said. Criticism is certainly legitimate and needed, for example when “denouncing wrongdoing, but this must always be done respecting others, their life and loved ones.”

All journalists must be honest with themselves and others, he said, even though with today’s 24/7 news cycle “it is not always easy to get to the truth or at least come close to it.”

“Life is not all black and white,” he said, and journalists need to be able to distinguish and discuss the gray areas.

“Political debates and even many conflicts are rarely the result of distinctly clear dynamics that tell unequivocally who is wrong and who is right,” Pope Francis said. “Discussion and sometimes disputes stem, deep down, precisely from that difficulty in synthesizing different positions.”

That is why journalism must seek the difficult and necessary task of getting as close to the truth as possible and to never say or write anything one knows in good conscience is not true, he said.

Professionalism in journalism requires not succumbing to special interests, be they political or economic. Truth and fostering a healthy democracy entail not just addressing the legitimate concerns of one segment of society, but having the well-being of the whole polity at heart.

Instead of fanning the flames of division, he said, journalists should foster a culture of encounter and hope, reminding people “that there is no conflict that cannot be resolved by men and women of goodwill.”

The pope said he hoped journalism would be a tool that builds, a player in contributing to the common good and a facilitator in the process of reconciliation.

The association’s president, Enzo Iacopino, gave Pope Francis a volume of writings by a young Italian reporter who was killed by the Camorra in 1985 at the age of 26 as he investigated the criminal organization in Naples.

Reporting at the service of the truth can be very dangerous, he said, and sometimes requires round-the-clock police protection or great sacrifices in family life.

Iacopino also pointed out the problem of extremely low pay for some reporters, particularly freelancers, who would consider a month’s pay of $600 “a mirage.”

PREVIOUS: Pope approves statutes for his united Secretariat of Communications

NEXT: Refugees try to tell their life stories through art in Rio de Janeiro