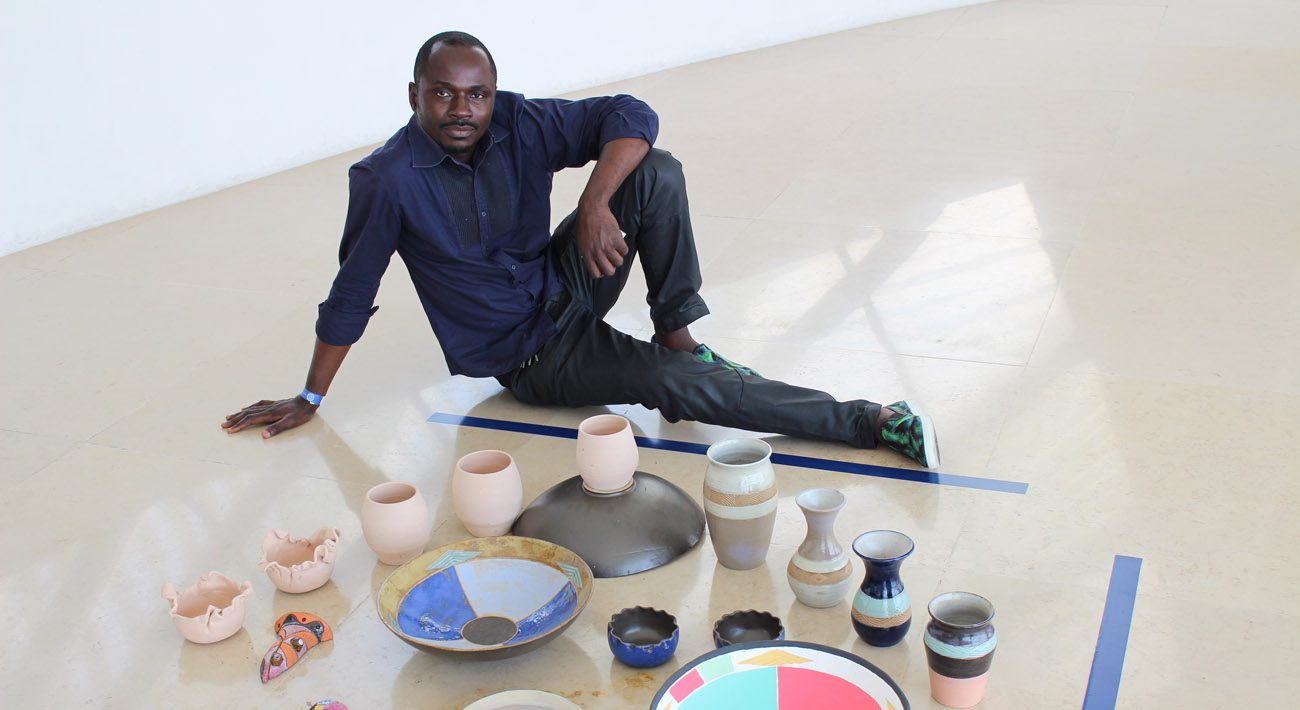 RIO DE JANEIRO (CNS) — Early this year, after having his house ransacked, artist Serge Kiala knew he would no longer be safe and made plans to flee Kinshasa, Congo.

“I inaugurated an art exhibition where I criticized (President Joseph) Kabila for trying to run for a third term as president, and they came after me for that,” Kiala told Catholic News Service.

With money he obtained from his uncle, he crossed over to the neighboring Republic of Congo and bought a ticket on the first plane off the continent. The destination: Rio de Janeiro.

Kiala is one of the four refugees taken in by Caritas, charitable agency of the Archdiocese of Rio de Janeiro, who are showing their work at the Museu do Amanha (Museum of Tomorrow). The exhibition, dubbed “Possible Horizons: Art as a Refuge,” has attracted visitors from all over the world, including those in the city for the Paralympics, which ended Sept. 18.

To help better integrate these refugees arriving in Rio every day, Brazilian artist-turned-curator Felippe Moraes contacted the Archdiocese of Rio to see how he could help. He was directed toward Caritas, which had already created a group of artists among its refugees.

“They are artists before they are refugees,” said Moraes, adding that art helps displaced individuals hold on to something from their past, remembering where they came from.

“The objective is to keep them artists,” added the curator. “They have subjectivity; they have stories to tell, and we should listen.”

Diogo Felix, Caritas spokesman, said the experience gives these artists a chance to have some of their old lives back.

“They arrive in Brazil with aptitudes and talents and, unfortunately, sometimes are forced to work in something that has nothing to do with their previous professional lives,” Felix said. He added that the archdiocese created such groups to give these refugees a chance of finding jobs that explore and use their talents and gifts.

Kiala said he escaped with two shirts, one pair of shorts and a pair of tennis shoes, all which now make up one of his art displays at the museum. His work is by far the most provocative of the four artists.

Africa is “an imprisoned continent where there is no freedom of expression and youths are not allowed to speak, participate or criticize,” Kiala said next to another of his works: the map of Africa outlined on the floor with chains and a padlock.

Keto Kabongo was also an artist in Kinshasa, but in January also decided to leave the war-torn country for safer dwellings. He left his family and friends behind and faced a 15-day boat journey from Sudan to the Brazilian port. With the help of Caritas, Kabongo found a place to live, started to learn Portuguese and was able to contact a Brazilian ceramist, who gave him a place to work and helped him continue his craft.

In Congo, Kabongo was a student of the Fine Arts Academy, founded by a Belgian Catholic missionary in Congo in 1943. He said now his ceramic pieces depict the colors and patterns of a happier time in his home country.

“War demolishes everything, nothing remains. It only separates and destroys,” he told CNS.

Completing the group are two Syrians, Ali Abdulla and Anas Rjab. Although they are not artists by profession, “They also have something to say. Anas, for example, came in to the (artists’) group to help translate for Abdulla, and became an artist himself,” said Moraes.

He said Abdulla is not an artist who produces content, but rather a researcher.

“He collects photographs to tell a story, as does any artist,” says Moraes.

Both men have found work in Rio. Rjab, who before coming to Brazil was studying to be an engineer, now works in the construction sector while Abdulla, in his early 60s, works as a cook.

“Both now look at art as a way to express themselves; a way to remember and to tell others where they came from. That was really my objective; to bring awareness and, as a consequence, bring them a little dignity,” said Moraes.

NEXT: Pretending to be a saint sickens, corrupts the soul, pope says