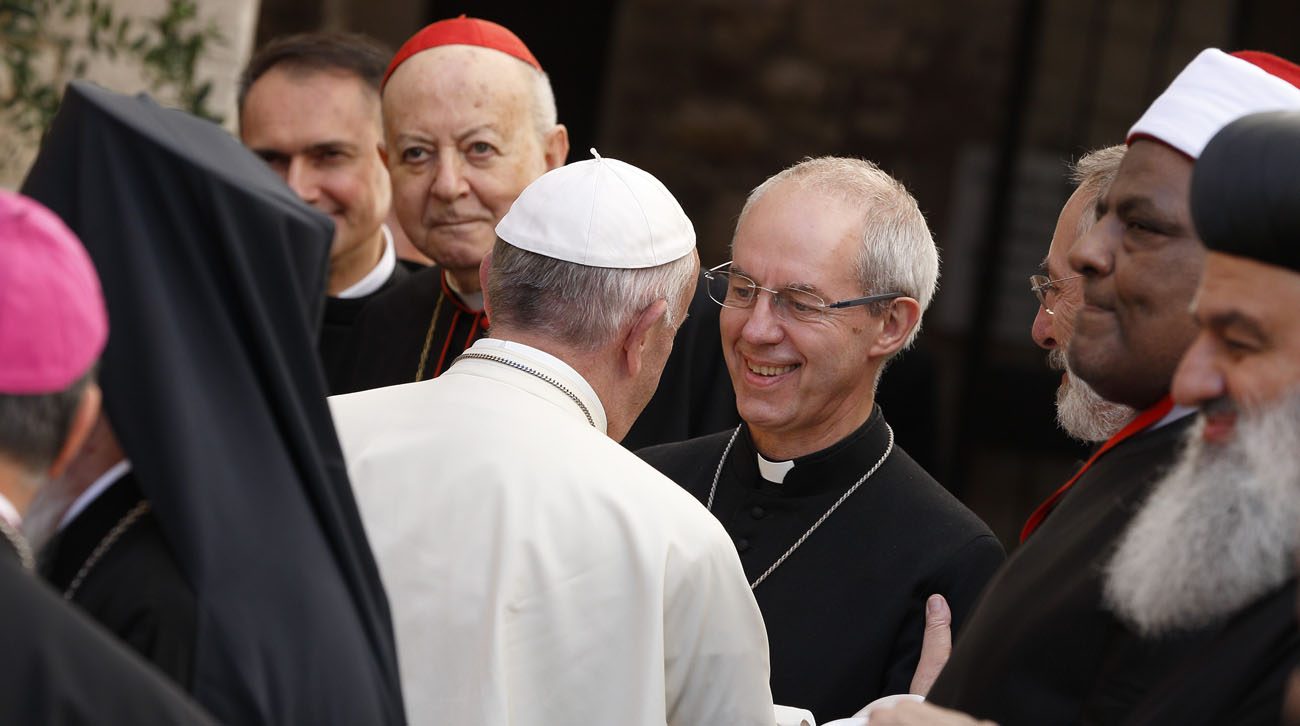 Pope Francis exchanges greetings with Anglican Archbishop Justin Welby of Canterbury, England, spiritual leader of the Anglican Communion, as he arrives for an interfaith peace gathering at the Basilica of St. Francis in Assisi, Italy, Sept. 20. The peace gathering marks the 30th anniversary of the first peace encounter in Assisi in 1986. (CNS photo/Paul Haring)

ASSISI, Italy (CNS) — Churches that are not reconciled with one another weaken the experience of mercy that unites believers to God and with each other, Anglican Archbishop Justin Welby of Canterbury said.

By not reconciling with one other, “our worship is diminished and our capacity to grow close together with God is reduced,” he said Sept. 20 in Assisi during a discussion on ecumenism.

“The failure of ecumenism imprisons mercy and prevents its liberation and its power with one another,” he said.

Mercy is the “engine of reconciliation,” Archbishop Welby said, and it is “the source of our capacity for the evangelization of the world in which we live.”

“Mercy begins with the mercy that each of us experiences in the sacrament of reconciliation; the knowledge that we ourselves are accepted,” he said.

Suffering and martyrdom, the archbishop added, also unite Christians and are a visible sign of ecumenism for the world.

“If we do not suffer together, we do not know the meaning of the ecumenism of mercy,” he said. “When they kill us, they do not ask if we are Anglican, Presbyterian, Catholic or Orthodox; we are one in Christ for them. So why are we divided when they are not killing us?”

Echoing Jesus’ prayer “that they may be one so that the world may know that I come from the Father,” Archbishop Welby said that the evangelization of the world “depends on that ecumenism of mercy.”

While they may have theological differences, he said, Christians must learn to “disagree well” and “learn to love one another with good disagreement.”

Evangelization depends on the visible sign of love and unity. If not, churches will be unable “to carry out Jesus’ command to go out into the world,” he said.

“It depends on the world seeing visibly that we belong to one another and that we love one another,” Archbishop Welby said. “Without that, we have nothing to say to a world that is incapable of resolving its own differences.”

NEXT: Religious leaders praise Patriarch Bartholomew as a great ecumenist